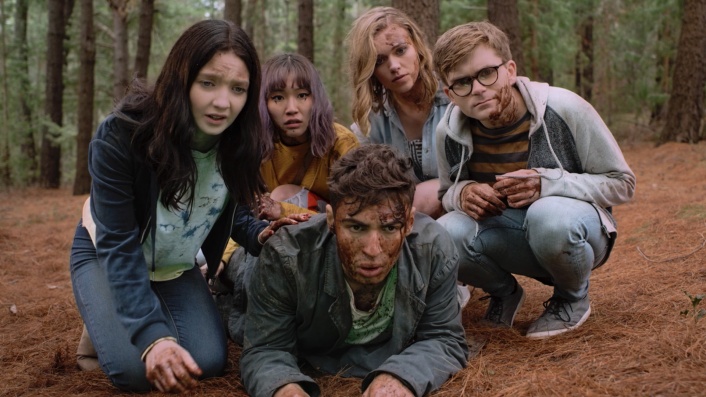 All in this together: Five very different teens find common purpose in ‘The Legend of the Five’.

THE LEGEND OF THE FIVE ** (96 minutes) PG
Here’s a case of an Australian film that, while it can’t be faulted for its ambition, suffers from biting off way more than it can comfortably chew.

The premise is familiar enough: five teenagers with nothing in common are involuntarily thrown together and embark on an adventure that shows how they do, indeed, have many things in common. These chiefly involve qualities that make them better people than when they started out.

While on a school excursion to a museum our quintet happens upon an imbued artifact that transports them to a well-forested realm replete with impressive landscapes, strange creatures, fairies, monsters, an excommunicated sorceress and, of course, plenty of fog.

Each kid is branded with a specific power that draws from the elements of the earth and, combined, they can save the world from a brooding apocalypse while delivering a warm enviro-message a la Avatar about how we are all connected to the earth as part of a cosmic oneness.

Now, your standard 21st century multiplex audience – raised on outsized blockbusters and conditioned to expect state-of-the-art visual effects even in the most mediocre films – is familiar enough with the type of labyrinthine plotting disgorged in The Legend of the Five.

However, most high-concept fantasy offerings are driven by an energetic pace and several hundreds of million dollars’ worth of production values.

Regrettably, neither is the case with The Legend of the Five, a valiant film that would have no doubt benefited immeasurably from a quicker clip and a heck of a lot more money to properly realize its elaborate fantasy world. It’s a low-budget film with big-budget concepts, and it too often shows.

The Legend of the Five is available on Apple TV, YouTube, Fetch, Foxtel Store, Google Play and Telstra TV Movies.

The film’s director is Joanne Samuel, one of the great long-haulers of Australian film and television.

Samuel is known to those who grew up on Australian-made television programs of the 1970s and 1980s such as Skyways, Five Times Dizzy, The Young Doctors and Certain Women.

She also played Sue Taylor in Class of ’74, a landmark black-and-white production that aired nightly, which was a huge task for an industry in its infancy. It was the first drama produced by Grundy’s, which till then specialised in game shows, and proved a huge hit.

However, the world best knows Joanne Samuel for her role as Jessie Rockatansky, the wife to Mel Gibson’s Max in the original 1979 classic Mad Max.

Now living happily in the Blue Mountains where she runs the 3 Sisters Youth Theatre, Joanne Samuel was kind enough to take some time out for a chat.

In this interview she discusses The Legend of the Five, reflects on her experiences making television in the 1970s, embraces a fresh interpretation of her role in Mad Max and her work with young actors.

And should there ever be a Mad Max 5, she acknowledges the precedent set by Fury Road, in which a cast member from the original film, Hugh Keays-Byrne (who played Toecutter), was given a major role as a new character.

She’d be cool with an approach from George Miller to participate in any new adventures in the wasteland, which could do with a new matriarch.