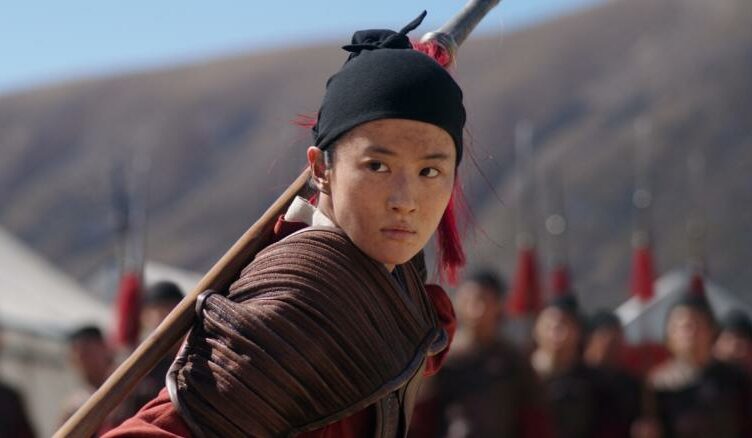 Bring it on: A girl masquerades as a boy to join the army and protect the Emperor in Disney’s ‘Mulan’.

MULAN *1/2 (115 minutes) PG
After much hyping and many delays, Disney’s much-anticipated historical girl-power action drama has finally landed. And what a thud it makes.

Mulan is Disney’s $200 million live-action remake of its wonderful 1998 animated hit. Regrettably, its chief achievement – as with the studio’s remakes of Aladdin, Beauty and the Beast, The Jungle Book and Dumbo – is that it reminds us just how good the original was.

Kiwi director Niki Caro (Zookeeper’s Wife; Whale Rider; North Country) fills the film with a lot of brash colour and high-flying movement but not a lot of emotion or energy.

In stark contrast to its brilliant animated predecessor the film is drab, leaden and self-important. Stripped of songs, Mulan 2.0 lacks levity, spirit and is void of humour. Mushu, the wonderful dragon voiced by Eddie Murphy, has been excised along with that lively cricket and Mulan’s horse. In their place is a relentlessly earnest tone that renders much of Mulan rather, well, dull.

Weighing the film down no end is the character of Mulan. For all her fighting skills and warrior spirit, our heroine is difficult to warm to as she slices and slashes her way to the film’s climactic face-off. She may have an independent spirit but she is given no inner life by the stony-faced lead performance from Yufei Liu, who twirls through the film with one stern expression (possibly two) frozen on her face. She’s a tough cookie, we know, but does she have to be such a cold fish? She is presented as such a stolid ice maiden warrior there’s no real vulnerability to her.

The saga of Mulan is set long ago in a semi-magical time of war where a young girl with super-human fighting abilities pretends to be a boy so she can join the Imperial army and do battle with her nation’s enemies.

The Emperor (Jet Li) is threatened by a band of ruthless horse-riding bad guys who like piling the helmeted heads of their victims into neat stacks to intimidate the populace.

Their leader Bori Khan (Jason Scott Lee) is an especially motivated gent, determined to avenge the death of his father by penetrating the Imperial palace and slicing the Emperor into several pieces. 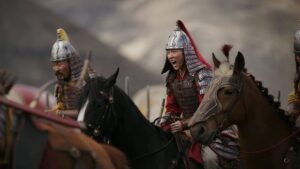 Bori Khan’s guys are fearsome enough. They ride mighty steeds, wear imposing black garb and have nifty archery skills wherein they can bullseye a pursuing adversary while riding backwards on their horses. On top of this they have a supernatural ally in Xianniang (Gong Li), an attractive witch (aren’t they all?) with heavy eye make-up who has the ability to change form, her creature of choice being an all-seeing eagle.

Yet the witch has a hidden agenda. While she’s meant to be bad to the bone, Xianniang has an over-powering personal interest in Mulan and her remarkable strength, called ch’i (or “qi”). Her hunger to partner with Mulan leads to a lot of familiar-sounding Star Wars-like chatter about this all-encompassing, Force-like ch’i energy. You half-expect Obi Wan to do a walk on.

In battle Mulan acquits herself with exceptional skill, but when the inevitable moment comes and her true identity is revealed her fellow soldiers are thrown into a tizz, unable to reconcile her heroic feats with the fact that she’s not a bloke.

So Mulan is sent off in dishonour, though her quest to protect the Emperor remains undiminished. And she’s not totally alone, for accompanying her is Phoenix, a large, multi-coloured flying creature with impressive plumage and a majestic presence. Trouble is, Phoenix is no substitute for the friends who rode with Mulan in the cartoon.

As grand as Mulan is meant to be, there are too many story stumbles and plausibility lapses to overlook, even for a family film.

Take Mulan’s disguise as a boy. It’s a bit of a joke, but not in a funny way.

Even given the license we grant a magic-tinged film such as Mulan it’s a stretch to swallow how the face of a beautiful, smooth-skinned young woman can go unnoticed amidst all the rough features and facial hair of her fellow soldiers, none of whom ever whispers to another: “Hey, does that dude look like a lady or what?”. The ruse worked in animation but not here. Putting a bit of schmutz on her face certainly doesn’t do the trick. It makes the training sequences look like an elongated blooper.

And those training sequences are long and largely unnecessary. We know from the get-go that Mulan possesses seemingly super-human abilities when it comes to jumping, leaping, flipping, balancing, running, kicking and swordsmanship. (Or should that be swordspersonship?) So why does her prowess need to be restated so many times? Where’s a good training montage when you need it? Have the Rocky films taught us nothing?

This underscores another major flub in the adaptation from the 1998 film. Mulan was not a born soldier and so had to work hard to prove herself. That made her journey tougher and, thus, far more interesting.

So why gift Mulan MkII with innate fighting skills? It robs her character of growth and challenge. It’s another point of departure from the original that turns Mulan into an expensive bland out.

The most unenviable hurdle faced by Mulan is its desire to stage great battle scenes, but within the confines of a family film. It wants so badly to deliver impressive hand-to-hand clashes, yet has to dial down the violence to hang on to its all-important PG rating.

It’s a tough trade off. With the sweeping aerial shots of warriors charging across the landscape, no problem. Up close, however, well, there clearly can’t be any geysers of blood or brutal dismemberment, you can’t dwell on all the stabbing and the spearing and the slicing that’s obviously going on.

Hence the killing has to be muted and abstracted with fast editing, yet it all still looks a tad phony, especially when Mulan neutralizes her enemies just by whacking them them. One kick and down they go.

As for the generous claim that Mulan is a spectacle, that’s a dodgy call. To be honest, these battles aren’t staged with much panache.

There are lots of armoured soldiers on horseback and on foot engaged in a cacophany of clanging – sounding much like somebody rifling through a cutlery drawer – but there’s nothing particularly thrilling in the cinematography by Mandy Walker (Australia; Hidden Figures; Lantana), which is very mannered and conventional.

We never get the sense of grandeur we saw in the battle scenes from Peter Jackson’s Lord of the Rings films, nor the tension Stanley Kubrick generated in that classic skirmish in Barry Lyndon.

The landscapes of Mulan are pretty yet largely function as background decoration, save for the one admittedly nifty avalanche scene.

When it comes to seeing Mulan as a girl-power film championing the cause of female action heroes who can hold their own and have minds of their own and thrive on their spirit of independence, well – yeah. We got that. We’ve had it for decades now.

These are powerful themes to have driving a narrative, but filmmakers need to work much harder to make them play naturally on-screen and to stop making out as though they’re anything new. After all, Crouching Tiger, Hidden Dragon and its magnificent kick-ass women is 20 years old. Indeed, the making of that girl-power classic was inspired by the success of the original Mulan, which demonstrated the mass-market appeal of strong action-movie female leads.

Here, the messaging is laid on so thick and predictably it has no real vitality, no spark. It’s just plopped into the film.

Again, the feminist stuff was done so much better in the animated film, and without the sterile sense of self-importance that permeates the new Mulan. What a let-down. 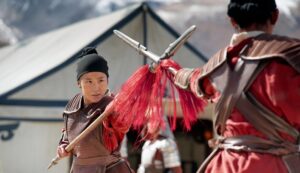 The big question with Mulan is, of course, whether it will hit with audiences.

As everybody knows by now Mulan was one of 2020’s tentpole films to have its cinema release schedule nixed by the Coronavirus pandemic.

Most studios have made the costly decision to wait out the virus before unleashing their big films. These include such popcorn sellers as: Wonder Woman: 1984; No Time to Die;

Disney, however, bravely decided to release Mulan straight into the stream on its Disney+ platform.

To see it, subscribers must fork out a premium of about $35 (in Australia), a hefty increase on a regular ticket price.

Why the price hike?

So by going straight into the stream, the film carries the daunting burden of needing to make around twice what it would normally make in its home market release to reclaim the revenue it was denied at the box office. Thus, the expense of seeing it on TV.

Every suit in every studio is watching the Mulan experiment very closely. It’s too early to tell how it’s done in the stream – studios don’t release streaming figures the way they do box office numbers – though there’s one worrying sign: the film’s take at the Chinese box office, where it was naturally expected to do big numbers, has been very thin, taking a paltry $US23m in its first three days.

Should Mulan eventually get the numbers it would normally have done it won’t be the game changer many predict. The movie business is way too conservative for that. It might lower the level of anxiety about releasing big films straight into the stream, but one successful case wouldn’t be enough to create a new business model. Never forget, studios will not easily surrender the beautiful billions they make at the cinema before sending films to the lounge room. They want those crowded houses.

Should Mulan tank, forget about seeing any of 2020’s other big films at home in the near future. No studio head would have the stones to declare: “We shall succeed where Mulan failed!” Not with billions at stake.

Almost any film with a global profile draws heat of one sort or another and Mulan is no exception. Eddies of controversy have graced the film’s release, with some souls in the LGBTetc community upset that the romantic fizz between Mulan and her superior in the original film has largely vanished in this one (but for a passing hint).

Boycotts have also been called against the film in Hong Kong because Yufei Liu tweeted support for the Hong Kong police who have been clashing with pro-democracy protesters. Silly girl. One hopes, for her sake, that she hasn’t violated a “watch your mouth” clause in her contract.

There have even been grumbles that the film wasn’t directed by an Asian. Ang Lee (Life of Pi; Brokeback Mountain; Sense & Sensibility) was apparently approached but couldn’t do it due to scheduling conflicts. Hmm. Given that he directed Crouching Tiger, Hidden Dragon one wonders what wonders he would have brought to the table.

Those sold on the hype might justify paying $35 to see Mulan at home. But is it worth it? An idea might be to cram as many people in front of the screen to help make it a viewing “event”.

But it’s probably better to wait until 4 December when you can see Mulan on Disney+ at no extra charge. That’d be the best call.

In the meantime, you can revisit the original Mulan, a wonderful, delightful, uplifting film that stands up beautifully in all its traditionally animated glory.

Mulan is available on Disney+.