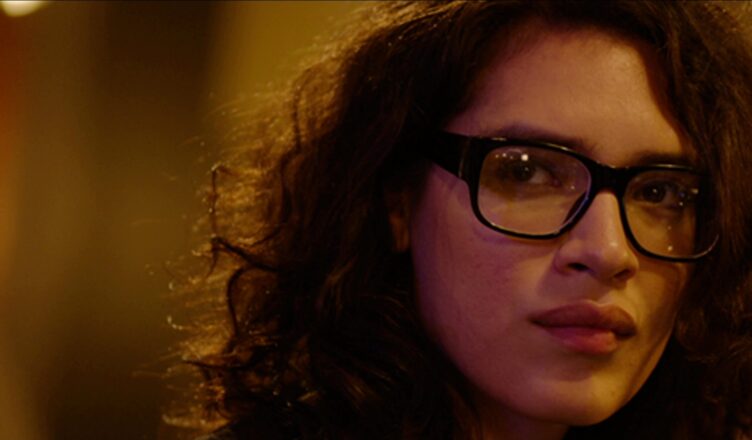 Looking for change: Happiness is elusive for trans woman Tina (Carlie Guevara) in ‘The Garden Left Behind’.

THE GARDEN LEFT BEHIND ***1/2 (88 minutes) NR
One of the easiest ways to start an argument these days is to simply mention the word “trans” in polite company. Immediately a whole flurry of hot-button questions erupt.

And above all, what’s life like as a trans person?

It’s into that realm we go with The Garden Left Behind, a moving, sensitive, close-quarters portrait of Tina (Carlie Guevara), a trans woman living in New York.

Warmly photographed and directed with compassion by Flavio Alves, the film tracks Tina as she moves through her modest life.

She cares for her loving Mexican grandmother Eliana (Miriam Cruz) while trying to make a living as a cab driver, living the whole while with the spectre of them being uncovered as undocumented immigrants.

Blessed with a close circle of friends and an appreciative lover Jason (Alex Kruz), Tina is saving desperately to cover the expenses of the physical transition she believes will make her complete and, presumably, happy.

The bane of her life at the moment, though, are the on-going grillings she has to endure with psychologist Dr Cleary (Ed Asner), a crusty old doctor whose job it is to put Tina through the wringer so he can assess whether hormone replacement therapy is the best option for her.

As is the case with her friends, life as a trans woman in New York is fraught for Tina once she leaves the comforting confines of her social bubble, which includes the trendy, trans-friendly bar run by Kevin (Michael Madsen), a very straight white guy.

Transphobia permeates the city’s mean streets, finding expression both in hectoring from neighbourhood thugs and in real violence that claims the life of a trans person.

This tragedy rouses anger and draws Tina into a circle of political activists as her community’s threshold for tolerance is breached. She is also the subject of a stalker whose designs on her are a point of tension.

Boasting strong production values despite an obviously low budget, The Garden Left Behind is a little film with a lot on its mind. Yet it is not a didactic film about trans life, thank God.

The film broaches a wide range of issues, sure, but it avoids the bombast of activist filmmaking and the sand trap of identity politics by keeping the focus on the story, which Alves co-wrote with John Rotondo, on Tina’s personal journey. It’s through her eyes that most (though not all) of the film’s events are processed.

And what a beautiful, complex, conflicted, happy/sad character Carlie Guevara delivers as Tina, at once a strong soul with an independent spirit, yet vulnerable and susceptible to making mistakes. It’s a very smooth, unforced performance that accounts for much of the film’s authentic vibe.

Still, the film is touching and grounded for other reasons, not the least of which is the clever casting of veterans Ed Asner (The Mary Tyler Moore Show; Lou Grant, etc) and Michael Madsen (Reservoir Dogs; The Hateful Eight; Kill Bill, Free Willy and so on).

So, what are these two old white dudes doing in the middle of a drama about a trans woman? Keeping it real, that’s what. It might not have been the intention but the characters these two play serve as a sound counter to the (admittedly paranoid) notion that love, care and allegiance for trans people is rare from the “regular folk” of the mainstream.

In one brief but telling moment, Tina whinges about Dr Cleary and his constant questioning. She is soundly shut down by her friend Carol (Tamara M. Williams) who tells her Cleary was one of the first straight people of influence to offer meaningful support to the trans community. He isn’t just some “old ass man”.

Similarly, though on a smaller scale, Kevin has no issues with his trans clientele, or in hiring Tina to work behind the bar. Though the characters never meet, they serve the same purpose by suggesting how the world at large might possibly be more comfortable with trans folk than some trans folk presume. The theme isn’t forced, it might not be intentional, but it is there.

As Tina strives for small measures of happiness in her life, Alves wisely keeps from pandering to an audience that would automatically side with her. He also refuses to shy away from some of the harder truths about the trans experience, an approach that some might find confronting.

And the film is confronting, chiefly because of its understated honesty. It dares to take us into the life experience of a trans woman with no overriding agenda apart from a determination to avoid cliche, polemics and to underscore its central character’s humanity.

If the film has an overt message, it’s that obvious, ever-relevant, all-American chestnut that decrees how every decent person has a right to be happy, however elusive a dream that might be.

The Garden Left Behind is available from 21 August on Vudu, Amazon Prime, iTunes and Fandango.

Before writing the screenplay for The Garden Left Behind, director Flavio Alves conducted extensive research for the film and auditioned about 200 people for the role of Tina, which Guevara won despite having very limited acting experience.

Originally from Brazil, Alves was granted political asylum by the United States in 1998 after a pretty rough time in the not-very-gay-friendly Brazilian navy. He has been an American citizen since 2010.

He wrote a controversial book about his time in the navy called Toque de Silencio (Call to Silence) and established himself with a string of acclaimed short films including: Angelo (2012); Tom in America (2014); The Secret Friend (2010) and Even in My Dreams (2008).

The Garden Left Behind is his first feature film and has thus far hoovered up a swag of festival awards including the prestigious audience award at South by Southwest (SXSW).

When it came to financing the film Alves had access to some grant money – a very rare thing for American independent filmmakers – and also employed an original and ingenious method of fund raising by selling items donated to the production on eBay.

With a red wine at the ready, Flavio Alves was gracious enough to spend some time staring into a Skype screen to talk in detail about the film, the high-profile support he received before production and what it is like being a 50-year old gay man in New York in 2020.