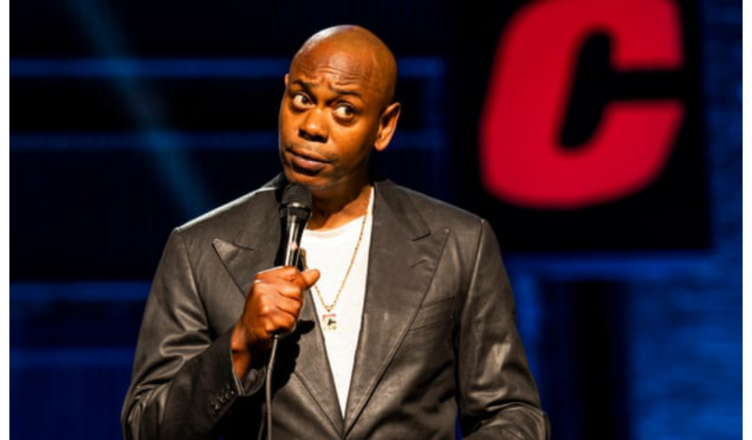 No filter: Dave Chappelle pushes back against cancel culture in ‘The Closer’.

DAVE CHAPPELLE: THE CLOSER **** (73 minutes) MA
Love him, hate him, agree with him or not, Dave Chappelle’s latest comedy special The Closer is flashpoint comedy at its finest.

Yea verily, could we expect anything less from a game-changing, self-consciously controversial comedian who, at last count, has been accused of being misogynist, homophobic and transphobic?

Though he steps out in a conciliatory spirit wanting to make amends for past jokes he admits went too far, Dave Chappelle spends most of his stage time on the front foot, both figuratively and literally.

Resting his left sneaker on a speaker box – a signature posture of intimacy with his loving Detroit audience – Chappelle presents himself as an unfiltered, unflinching free thinker, fully aware of the controversy he creates and totally unapologetic about it.

Combining observational wit and piercing pop-cultural savvy, the show is a near-brilliant, free-flowing blend of comedy and commentary that, as usual, has drawn a lot of flak from the usual quarters, namely the LGBTQ+ community (or their spokespeople, at least).

After a congenial warm up bit about his experience catching Covid, Chappelle hits with a gag about having sex as a child with a priest, and how much he enjoyed it.

Oddly, it’s not this Gervais-type joke that has attracted any attention. Nor his movie about entitled white people called Space Jews. Nor his anti-racism kids book Clifford the Big Black (N-word).

In The Closer – named because this the final of his six-show deal with Netflix – Chappelle revisits favourite comedy terrain where he pays out on cancel culture, WokeThink, feminism, the excesses of the #metoo movement and the LGBTQ+ community – with emphasis on the T.

What has cracked the Earth in two is Chappelle’s stance on transgender women; he sides, without qualification, with Harry Potter author JK Rowling, who, like pioneering feminist Germaine Greer, does not consider trans women to be real women.

Chappelle explains how Rowling has consequently been tagged a TERF – a Trans Exclusionary Radical Feminist. He then proudly declares himself to be on “Team Terf”, saying how many women react to trans women the way black people react to blackface. Whoa!

Illustrating his point with blistering frankness, Chappelle cites with exasperation and disbelief how Caitlyn Jenner – formerly Bruce Jenner, the Kardashian patriarch and medal-winning Olympian – was awarded Woman of the Year in 2015, only months after coming out as trans.

The audience loves it. And Chappelle means it. Boy, does he mean it.

Declaring his respect for old-school gays from the Stonewall era, Chappelle gains even more sway with his crowd when faulting present-day LGBTQ+ people as being far too brittle and sensitive, unable to take a joke or brook disagreement.

As for #metoo women and claims he is misogynist: “What could I possibly be saying to make bitches think I hate women?” He even offers them the one thing they need that will lead them to a better life – his strong male leadership. All they need to do to secure his services is offer him executive relief.

It’s first-class trolling, known in the olden days as “set’em up, knock’em down” comedy.

He scores big laughs while excoriating the excesses of #metoo and the rabid nature of cancel culture – note how Chappelle still burns over Kevin Hart being forced to give up his dream gig as Oscars host.

Is it offensive? Sure. Is it wrong? Of course not. As Chris Rock says, context is everything, something Chappelle’s storytelling style always ensures. And he hits dead centre on his targets, like them or not.

Chappelle’s comedy strikes at the very heart of Woke culture; for him – and many anti-woke comedians – causing offense and hurt feelings is a part of comedy, not apart from comedy. Nothing is quarantined from criticism.

As is with any orthodoxy based on fear, the power of Woke thrives on compliance – and Chappelle is not playing. He proved that in his splendid 2019 special Sticks & Stones and doubles down on his defiance in The Closer.

Fully conscious of his controversial track record, Chappelle simply refuses to back down or apologize. If anything, the show is a taunt, its message clear: Cancel me. I dare you.

The move to do so is already on, with GLAAD and the NBJC (National Black Justice Coalition) condemning the show and calling for Netflix to pull it down.

That’s unlikely, given that The Closer is Chappelle’s sixth show for Netflix, which loves Chappelle’s numbers and embraces his controversial routines, promoting his most searing bits via YouTube.

As hot-button a show as The Closer is, Sticks & Stones was arguably more confronting.

His deconstruction of the LGBT community as different movements all sharing the same car was hilarious and poignant.

Most controversial was his support for a woman’s right to abortion, which came with a truly jaw-dropping caveat:

“If you decide to have the baby, a man should not have to pay. That’s fair. If you can kill this (expletive), I can at least abandon them. It’s my money, my choice.”

It caused a furore, but it’s still there. So if Netflix had a mind to “cancel” Chappelle, it would surely have done so by now.

As far as girder-sized straws being fastened to the back of the Woke Camel go, The Closer is the latest high-profile pushback to cancel culture, coming so soon after the successful return of New York comedian Louis CK.

As we all know by now, in 2017 Louis CK admitted to some pretty grave wrongdoing, mostly to do with self-pleasuring in front of women, which he’d been doing for years.

Disaster followed. He lost gigs, a movie release (I Love You, Daddy), a Netflix deal, plenty of friends and around $35 million (Louis CK’s own estimate). It was meant to put the kibosh on his career. Cancelled.

But Louis CK refused to lay down. Instead, in 2020 he released a hit self-produced comedy special Sincerely Louis C.K. and announced a major tour for 2021-22, Covid permitting. He has already played several sold-out gigs in NYC.

In Sincerely, Louis spoke openly about his misconduct, lamenting how while everybody’s “thing” was private, his “thing” was public knowledge. The audience loved it.

By openly owning his misdeeds, apologizing and reprocessing his troubles into a comedy bit – which is what comedians do most of the time – Louis CK essentially uncancelled himself.

His film is still yet to be seen – co-star Chloe Grace Moretz will have nothing to do with it – but his return to comedy has a lot of high profile support. He is not playing by Woke rules, just like Chappelle.

For all his aggression in The Closer, Chappelle does make good on his opening promise to make nice with the LGBTQ+ community he has had such a fun time ripping on.

Ultimately, the show is not a taunt to LGBTQ+; it’s an invitation from Chappelle to loosen up, lighten up and listen to what he is actually saying. He even vows, semi-seriously, that: “I am not telling another joke about you until we are both sure that we are laughing together.”

Bravely, Chappelle confronts LGBTQ+ for abusing its power by pursuing friends such as Kevin Hart and rapper DaBaby over infractions he stridently believes do not warrant such feral prosecution.

“All I ask of your community, with all humility: Will you please stop punching down on my people?” Powerful stuff. Totally un-Woke. Totally on the money.

As for the claims that he is transphobic or homophobic, Chappelle blithely throws out the challenge for anyone to cite any of his routines where he expresses such views.

It’s a haunting tale, funny, moving, that renders nonsensical any accusation that Chappelle is transphobic, homophobic or anything but a decent guy.

That is unless anyone is willing to come out and call him a liar.

A tall order, that. Lying is precisely the opposite of what Dave Chappelle excels at.