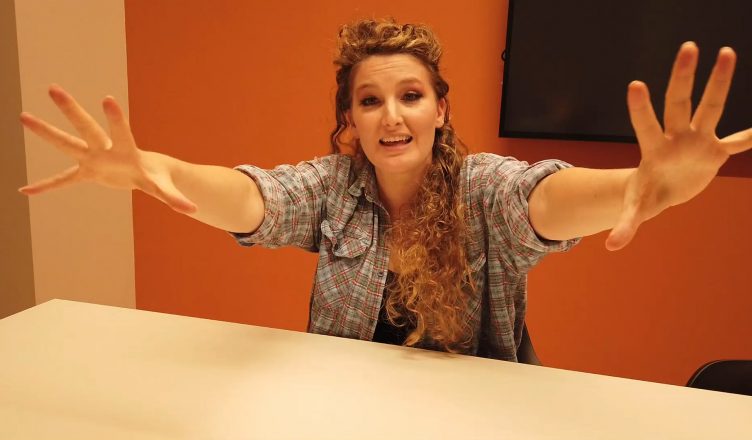 “Sometimes I realize that I write my shows upside down.”

If there’s one line Alice Fraser can well afford to drop from her fabulously funny, thoroughly engaging, typically thought-provoking new show Chronos it’s her quick quip about how she doesn’t think she’s all that good at being a comedian.

It comes about 10 minutes in, by which time Fraser has proved beyond any sensible question that her slick, smiling delivery is too smooth, too witty and too affable to warrant such a self-critical squib.

Chronos is a breezy hour of solid stand-up that sold extremely well to a comparatively small, resolutely receptive audience of about 30 souls, all gathered at the front of a cavernous Greek Centre venue.

Kicking off with a delightful ditty about Covid, Fraser presents a playfully meta-routine as she recounts writing Chronos during a 4.5 hour express train ride from London to Glasgow for the show’s big preview that night. As luck would have it, her adventure in procrastination took place in March 2020, right on the eve of the pandemic.

Observing her fellow travellers in detail, the premise serves as a sturdy through line, allowing Fraser to digress seamlessly into such important topics as rich dogs, funny emails, podcasting (and the associated despair of trawling recycled news items for jokes), the lessons of being in quarantine and how performing comedy via Zoom “is exactly like having a nightmare about doing comedy”.

One of Fraser’s long-established signatures is her great way with words, and there’s plenty of that on display here. “I’m not old, I’m just older than I expected to be by now,” she japes, her bon mots often sounding like a cross between Oscar Wilde and Steven Wright.

As broad as the show often gets – she’s not above a well-worded dick joke – Fraser, as always, likes touching on somewhat serious matters.

In other works, such as her acclaimed show Savage (on Amazon Prime) she deftly moves into spoken-word mode to speak about such heavy topics as sadness and loss before toggling back to the funny.

In Chronos Fraser sticks to keeping things light, even when lamenting about short attention spans, awful old ladies and how much our lives are ruled by algorithms designed to give us what we want at the exclusion of everything else.

Though Chronos presents as a fun, fluid ramble it runs on a rich undercurrent of thought; Fraser is skilled at foreshadowing, dropping clues that remain invisible until the payoff makes you realize she’s been prepping you for this all along. It’s very satisfying.

Along with getting laughs, Fraser loves investing herself in her performances, working herself into a visibly emotional state about themes and values she holds dear, and that she dearly wants to share.

It’s those moments of connection with her people that bring added meaning and resonance to a show that is already funny enough.

It seems Covid’s corrosive effects on live performance isn’t over.

INTERVIEW
The day after her gig Alice Fraser was kind enough to meet up for a sit-down to discuss the show, her approach to comedy and the insecurity of being an independent artist.

In a lively deep-dive interview, Fraser laments over the small houses she’s been drawing and speaks about the line between comedy and pathos, cancel culture, TV satire and why she loves to podcast so much. (Check her stuff out here http://www.alicecomedyfraser.com/teacast)

For more about Alice Fraser, visit her site.

In conversation Alice Fraser is both eloquent and shows she has a mind sharp enough to slice salami with.