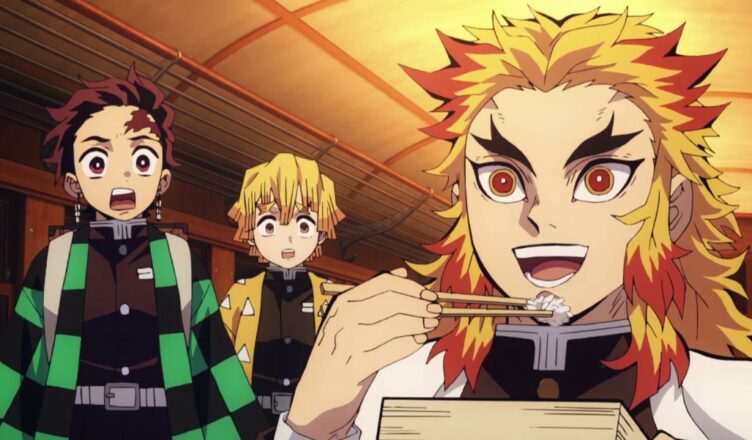 DEMON SLAYER *** (104 minutes; subtitled) MA
Easy as it is to pretend otherwise, the visually volcanic anime epic Demon Slayer –
or, to give it its full and proper title, Demon Slayer -Kimetsu No Yaiba-The Movie: Mugen Train – is a tad hard to follow, at least for the first 30 minutes or so.

Based on the phenomenally popular anime series Demon Slayer: Kimetsu no Yaiba by Koyoharu Gotouge, the film is reportedly a sequel to the first season of the show.

And it’s very clear from the film’s opening salvo that intimate knowledge of Demon Slayer lore might hold you in much better stead than some hapless soul experiencing this frenetic and singularly loud anime universe cold.

Still, stick with it and you eventually tap into the crazy swing of the thing as the barrage of bullet train exposition gradually coalesces into something resembling a coherent plot line.

With almost all the dialogue delivered in fitful shouts and screams, it slowly emerges that the film is about demon slayers.

In particular, it involves a group of young demon slayers who are aboard a cursed train full of immobilized passengers. The mission of the demon slayers being to exact revenge on a…well, on a demon.

Matters remain fuzzy, but there’s something very important about dreams and invading dreams to destroy somebody’s spiritual core, thus neutralizing them. Again, events move so quickly and the animation styles keep toggling it’s a challenge keeping tabs on exactly who or what is doing what to who. Or what.

Thankfully, by the time we get to the elongated action climax it all boils down to a reassuring battle between the forces of Good and Evil.

So Demon Slayer -Kimetsu No Yaiba-The Movie: Mugen Train then becomes a matter of simply sitting back and enjoying the pace of the fighting and the quality of the animation, most of which appears to be traditionally rendered, aside from some digital touches.

There’s a lot of cool-looking shape-shifting and gruesome dismemberment, all to a thunderous, crashing audio track that sounds like it was inspired by Michael Bay after three cups of strong coffee.

Mercifully, and like most films by Michael Bay, Demon Slayer can easily be watched, comfortably and without undue aural punishment, with ear plugs. Take it as gospel, you won’t miss a thing.

You certainly emerge from Demon Train absolutely saturated by the experience, testament to the film’s extreme devotion to its formidable fanbase, which has apparently made the movie the biggest box office hit in Japan ever.

Globally, the film has taken a whopping 370 million American dollars, which converts to 480 million Australian.

That’s all good – though one hopes by that time the producers would have realized that greatly increasing their international audience, possibly by double, was a simple matter of releasing a dubbed version.

And maybe lowering the volume.