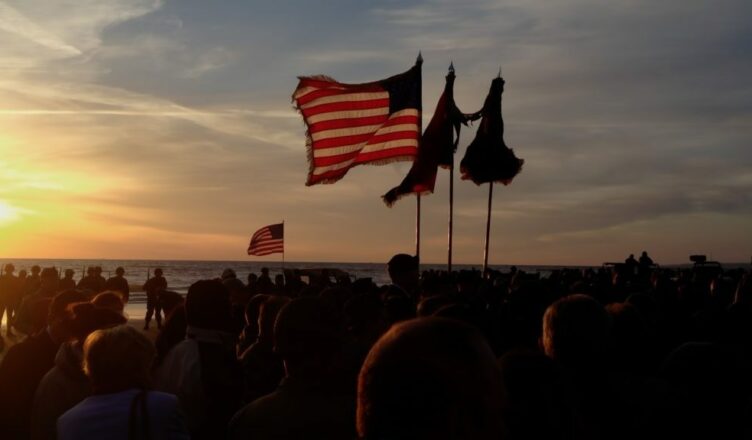 SUNKEN ROADS: THREE GENERATIONS AFTER D-DAY ***1/2 (91 minutes)
It’s a generalization, sure, but most war documentaries tend to frame their narratives with a neat, traditional structure.

Typically, the broad strategic battlefield objectives of the high command are outlined with maps and arrows while the realities are coloured in by the experiences of those who did the actual fighting, often in sobering detail.

It’s a long-established, deeply respected format that balances the big picture with the human cost of warfare, a documentary mode perfected by such classic TV presentations as The World At War and Vietnam: The 10,000 Day War.

Sunken Roads occupies the other end of the war documentary spectrum; shot in a distinctly unvarnished style the film delivers a perceptive, deeply personal, illuminating and, at times, surprising first-person account of the D-Day landings and of the days that followed as troops cautiously moved inland to liberate Occupied France from the Nazis.

To commemorate the 70th anniversary of D-Day and her great-grandfather’s part in it, young American filmmaker Charlotte Juergens picked up her mother’s Sony camera and joined a group of veterans as they retraced their steps from Britain to France.

Filmed in 2014 when Juergens was a 20-year old sophomore at Yale, she adopts a decidedly raw, on-the-ground, as-it-happened verite style. The photography is often jagged as she tries capturing the moment from whatever vantage point she can.

Juergens deliberately leaves in flubs a more formalist approach would instinctively erase. The auto-focus goes in and out, she knocks the camera around, the framing is often wildly imprecise.

Yet this very roughness actually enriches the film, added veracity, immediacy and spontaneity to the anecdotes and testimonials of the veterans, some of whom are full of vim, some of whom are in declining health.

She has no delusions about her film being an exercise in objective documentary making. She reports suffering from ceremony fatigue, on hearing earnest speeches and The Last Post over and over.

She grows close to the veterans and, perhaps inevitably, they grow close to her. In one admittedly unsettling episode, Juergens reveals how one of the veterans begins referring to her as his grand-daughter.

Juergens never met her great-grandfather Pat, but in a stroke of good fortune her mother (also a filmmaker) had the foresight to extensively interview Pat in the 1990s about his wartime experiences; his words provide some of the film’s narration.

The desire to follow his story, however, comes under stress as Juergens finds the facts of his actual experience aren’t lining up with what she expected.

It leads to a tough decision she has to make about which way the film should go.

It’s the type of mid-film gear shift we’ve seen in films by such esteemed filmmakers as Nick Broomfield (Kurt & Courtney) and Werner Herzog (Grizzly Man) and serves as a measure of just how upfront a director is being with their audience.

As a historical chronicle of D-Day and the 29th Division, there is plenty of factual detail embedded in emotion throughout Sunken Roads; most vivid is the recounting of the landings with images, illustrations and descriptions of the horror.

There are points when you wish Juergens had inquired a little deeper into matters, such as the knowledge gap between French and American children when it comes to World War 2.

Still, the film certainly serves a sound backhander to the generational cliché cherished by Boomers about how young people aren’t sufficiently invested in matters of history. That’s clearly not the case.

Extremely well-edited and briskly paced, Sunken Roads is an unconventional war documentary, and all the better for its verite approach, which offers a retelling of a history-changing event that is highly personal, often touching and replete with insights into the realities of battle and the true cost of war.

For more info and details about how to stream the film go here.

From her abode in Brooklyn, New York director Charlotte Juergens was kind enough to front up to her Skype screen and share her story about the making of the film, why she made it and what she hopes it will achieve.

She also shares her thoughts on how World War 2 history is taught in American schools and bravely addresses her reservations about referring to those who fought in WW2 as “The Greatest Generation”.

As she explains, the film was made for a pittance and finance was hard to raise.

As is the case with all independent American filmmakers, Juergens did not have access to the type of government funding Australian filmmakers can apply for. Among her options was crowd-funding, which she found helpful, but rather stressful.