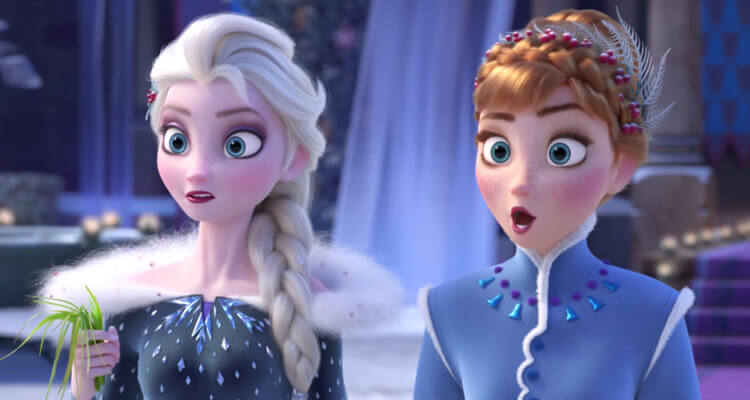 FROZEN II **** (103 minutes) PG
If modern movie history has taught us anything it’s that the art of predicting whether a hotly anticipated film will actually be any good is fraught with danger and embarrassment.

Collectively we have learnt, through much pain and sorrow, that hype and anticipation offer no guarantees of quality.

It was, nonetheless, a very safe bet that the sequel to Frozen – Disney’s surprise 2013 mega-hit that took over $1.3 billion worldwide, making it the biggest animation film in history – wouldn’t just be good, it’d be very good indeed.

While not quite hitting the emotional peaks of Frozen, Frozen II comes close enough. Elsa (Idina Menzel), Anna (Kristen Bell), Kristoff (Jonathan Groff), his reindeer Sven and the sentient snowman Olaf (Josh Gad) all return for an adventure that takes them all into a foreboding, song-laden landscape beyond their comfort zones.

A siren song hails Elsa to leave home and investigate its source and meaning, leading her and her gang to an attractively spooky enchanted forest. Here, Elsa confronts the spirits of earth, fire air and water. There’s also a conflict going on between two formerly friendly people: the Northuldra and the Arendellians.

Elsa’s odyssey, admittedly more complicated and abstract than anything we saw in the first film, involves the uncovering of her parents’ backstory and restoring the enchanted forest to its peaceful state. This she must do by locating the mysterious fifth spirit that will bring the warring tribes back together.

The film’s big dramatic stress point involves how far Elsa and her sister Anna can remain together on the quest. Elsa is the one with the magical powers who can battle all that comes before her, but can she do that and protect the powerless Anna, and her friends?

Original directors Chris Buck and Jennifer Lee, leading the team involved in making the first film, have dutifully deployed all the big ticket items they needed to make Frozen II not just work, but knock it out of the park.

They’ve enhanced the bonds of sisterhood between Elsa and Anna, with Elsa recognising her responsibilities as an older sister. The humour from the first film carries over effortlessly here, maintaining the same cadence so that it never interferes with the drive of the drama.

Of course, Frozen II has its all-important “Disney Moment”, that scene embedded in all great Disney films where an emotional apotheosis silences the audience and causes the heart to skip. Be warned: the one in Frozen II is a real chiller and might elicit a tear or two.

The animation is of the usual high standard, with many stand-out sequences, the most awesome being the scene where Elsa does battle with, of all things, an angry ocean. It’s state-of-the-art stuff, no risk.

But what would a Frozen movie be without great songs? Kristen Anderson-Lopez and Robert Lopez, who did the first Frozen, fill the film with a range of terrific numbers, each either propelling the story forward or deepening the emotion of the moment.

Understandably, the task of creating a signature tune must have been daunting, what with the world-conquering “Let It Go” setting the bar a tad high. Yet the film’s big showstopper “Show Yourself” is a soulful and beautiful power ballad.

Other great songs include the anthemic “Into the Unknown” and the very catchy “Lost in the Woods”. Sung with all his heart by Kristoff (Jonathan Groff), it’s a deliberately over-the-top love song, an affectionate parody of the type of syrupy songs pumped out by Chicago in the 1970s and ’80s.

The song also serves as a reminder that, like its predecessor, Frozen II is as much a date-night movie as it is a piece of sugary entertainment for the billions of little girls who helped make Frozen a pop-cultural touchstone.

So, with so many highly anticipated big films missing the mark of late – Charlie’s Angels; Terminator: Dark Fate; Men in Black, etc etc – why was it safe to expect that Frozen II would rise to the challenge and avoid generating the type of disappointment that accompanies so many sequels and reboots?

Hidden deep in the hearts of every Disney studio suit is the morbid dread of being hated by children. Upset your adult audience with a bad film and, with time, they can be won over by the next hit off the assembly line.

But disappoint the planet’s population of 4-12 year olds and you risk poisoning your brand to an entire generation of filmgoers for life.

That was the dilemma Disney faced with Frozen II. Churn out some cruddy, cash-in sequel to the world’s most beloved animated film and just watch bad word-of-mouth – the most feared entity in the movie world – eat away at your brand value.

Add to that the loss of respect from adolescent and adult audiences and you got trouble.

But Disney played it right. When Frozen surprised everybody by becoming a monster hit Disney developed the brand through merchandising, home entertainment, a Broadway musical and theme parties.

Thus, when it came to the sequel they followed the most trusted rule in show business – if it ain’t broke, don’t fix it.

Sure enough, with Frozen II Disney keeps faith with the kids who flocked to the first one (who would now be 10-12) as well as with the new, merch-loving generation of fans who discovered and fell in love with Frozen via DVD and the stream and who have literally spent most of their young lives awaiting the sequel.

As a side note, it is also significant to register how, at a time in the movie business where some creators are overly anxious to appear “woke” and politically correct regarding female role models, Disney’s Frozen films have reinforced the studio’s proud tradition of movie princesses, a very unwoke move, indeed.

This would infuriate the faddish opposition to the “princess phenomenon” mounted by third-wave feminists, who regard such fantasy figures as somehow harmful to the little girls who love buying the dolls and dressing up as Disney princesses.

Yet the portrayal of the princess character in the Frozen films is positive and empowering, casting Elsa as strong and independent. It’s a theme that runs through many Disney princess films, which have seen the figure evolve from damsel in distress to heroine.

So, with Frozen 2, no faddish wokeness was allowed in.

In all, they’ve done a splendid job replicating the atmosphere and joy of the first film while developing the lore around its cast of beloved characters. Long may Frozen’s frosty charms endure.

And, yes, of course there are already serious talks for a Frozen 3.

As for how Frozen II will do, here’s a prediction based on the positive word-of-mouth it will generate. The first film took $1.3 billion. Frozen II will take at least that, but faster. It’s already taken $371 million after four days of release. Not a bad start.

A late-night break-in at a New York winery in search of a huge drugs haul goes wrong when it is interrupted by a group of patrol cops. A frenetic gunfight ensues, leaving a shocking body count and a lot of questions over whether the crime scene is as straight-up as it first appears.

Detective Andre Davis (Black Panther’s Chadwick Boseman, who also produced) goes in hunt of the culprits, who are in a panic over the bloody mess and are murderously eager to get out of town.

Suspecting this, Davis orders the city to be locked down, meaning nobody can enter or exit visa roads, tunnels, public transport or across New York’s 21 bridges. But he and his partner Frankie Burns (Sienna Miller) only have the advantage until 5am.

The truth behind the break-in unravels as the increasingly desperate and violent chase unwinds across Manhattan and the crims sense the heat getting ever closer, fearing that revenge is motivating Davis more than justice.

Proficiently directed by Brian Kirk (Game of Thrones; Boardwalk Empire) 21 Bridges is a standard race-against-the-clock, cops & robbers crime thriller; formulaic, to be sure, but extremely well mounted, with Boseman putting in sterling work as one angry cop with a short wick and a lot of chips on his shoulder.

A tight, chase-based ripper, 21 Bridges feels like something the great Sidney Lumet (Serpico; Dog Day Afternoon; Prince of the City) would have made back in the 1970s.

KNIVES OUT ***1/2 (130 minutes) M
It’s wall-to-wall fun, mystery and mayhem among a wonderful array of obnoxious rich people in this snappy old-school whodunnit.

Written and directed by Rian Johnson (The Last Jedi) the package comes complete with a sprawling mansion, red herrings, switcheroos, twists and surprises to keep fans of Agatha Christie, Murder, She Wrote and Columbo very happy.

The pretzelized plot involves a veteran best-selling mystery author (Christopher Plummer, in great form) whose plan to rewrite his will puts his family of upper-class heathens into a tizz. The announcement is made on the night of a family party for his 85th birthday, a celebration he does not survive.

Johnson takes his time with the pacing and plotting as each character is questioned at length and the truth becomes ever more elusive, yet the film’s leisurely length is dressed in loads of style, cheek and deliciously heightened performances.

Though the film is not as accomplished, Spall’s performance is a sterling study of understatement and pent-up frustration opposite a bed-bound Vanessa Redgrave, who plays his domineering, ego-crushing horror of a mother.

A rent collector by day, the timid Lowry spends his home time caring for his bile-spitting mum and painting away in his attic. Lowry became acclaimed later in life, but the stage we see detailed here is before anyone thought he was any good, his mother especially.

There are a few exterior scenes but director Adrian Noble, working from a screenplay by Martyn Hesford (adapting his own play), can’t do much to hide the film’s theatrical origins.

That’s not much of a complaint, though, given how good the central coupling is. Spall, who appears to have lost half his heft, is as magnetic here as in any of his performances for Mike Leigh.

As for Redgrave, she is so effective as the alternately sweet and sour matriarch it’s a testament to Lowry’s temperament that he didn’t end his troubles by doing her in with a strategically placed pillow.