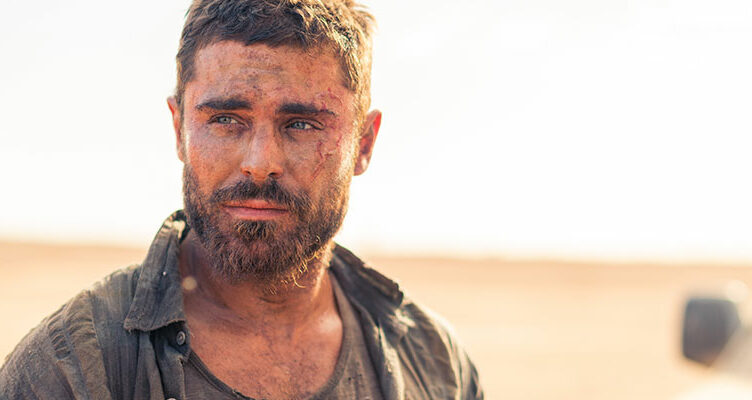 Heat and dust: Zac Efron in the post-apocalyptic drama ‘Gold’.

GOLD * (97 minutes) M
The best thing that can be said about the dire new Australian movie Gold is that everybody knew about its Australia Day release into the stream.

That’s a rare spectacle to behold given how so many local films are still being released with almost no market profile. And though the signage for Gold has almost hit saturation level, better to have too much than not enough. We saw the same thing with Oz horror film Relic.

Hopefully this marks a new page for Australian films as the streaming release model helps bring an end to the ritual of people saying “never heard of it” when asked about a new Aussie film.

If only Gold was a better film. Or even a good one.

The latest in a long string of films to be set in a post-apocalyptic wasteland of barren plains and plenty of dust – thanks for that, Mad Max, but time to hit refresh on that cliché – the film’s thin premise involves two sun-baked dolts who discover a giant nugget of gold in the middle of nowhere.

The thing is too big to dig up and cart off, so Man #2 (Anthony Hayes, also director, producer and co-writer of this dross) and the taciturn Man #1 (Zac Efron) come up with a truly brilliant idea: one of them will drive off to the nearest town for an excavator to dig the nugget up, the other will stay and babysit the nugget to…to…protect it?

As simple as the premise is, it’s weak as heck and it won’t be long before the average schmo begins to wonder why these idiots don’t just conceal the tiny bit of the nugget that was showing above ground when they discovered it, mark the spot with a sign only they will recognize, then both go off on their shopping trip together.

Why does one guy have to remain in the blistering sun with no weapons, no sunscreen and only a bit of water, waiting for the other?

Perhaps the apocalypse that has stricken this future world has annihilated common sense. That would explain why, in trying to hide something, these two morons choose to deploy the most attention-seeking means imaginable. But who knows? We’re never told.

So, Man #1 is left there and…and…nothing happens. Well, not absolutely nothing, but nothing much of interest.

Against all probability a nomad (played by Susie Porter) wanders through – but is she real or a figment of his dehydrated mind?

Same goes for the other critters he encounters, including some wild dogs, a snake and a very friendly scorpion.

If the sluggish, uneventful scenario is intended to work as an allegory of greed or capitalism or some such it doesn’t ring the bell. It’s just too slow and boring. Half-way through things get so inert you wish the distant dust trail of an approaching vehicle would turn out to be the bus from Priscilla. No such luck.

Given how the nature of the apocalypse is never revealed and that Dude #1 is trekking toward some ill-defined better place, it’s a pity the film didn’t take full advantage of this vagueness and use the desert as a symbolic landscape, a la Michelangelo Antonioni with Zabriskie Point.

Like so many Australian films, Gold has a big problem with its third act, namely that it doesn’t have one. The film just ends, arguably at the very point where the third act should begin.

It’s infuriating and deeply unsatisfying, as though the makers lost interest in the story, just as viewers had an hour earlier.

Equally annoying is how Gold is being widely described as a survival thriller. No it’s not. A survival thriller is a film where the audience actually gives a flying toss about whether the characters on screen live or die. Gold is not that film. Perhaps a smidgen of backstory might have helped in this regard.

Far too much praise has been heaped on Zac Efron’s performance, presumably because he’s not the Zac Efron we saw singing and dancing in those High School Musical movies from around 15 years ago.

Yet there’s nothing all that impressive here. He grunts, he mumbles, he stumbles about, rolls around in the dust, acts appropriately frightened when confronted by various nasties. Dried mud and blood are smeared across his bearded face. Luckily, he doesn’t have access to a mirror.

If you’re truly interested in seeing a terrific turn from Efron, check out his astounding performance as Ted Bundy in the 2019 film Extremely Wicked, Shockingly Evil and Vile. (It’s on Netflix.) Or just watch Dirty Grandpa again. (Also on Netflix.)

There’s some admittedly good effects work in Gold involving wild dogs and a massive sand storm. And some of the cinematography is strong.

If only it was all in the service of a better movie. Or even a good one.

Footnote: The ads for the film that bombarded us in the lead-up to Australia Day – again, sincere kudos for that – curiously pushed the point about how Gold was somehow “the most anticipated film of the year”.

Gold had a brief run in cinemas before hitting the stream. Right now on the film’s Wikipedia page it says how “the film grossed $US2,741 from ten theaters [sic] in its opening weekend.”

Hit the citation and you’re taken to the official Box Office Mojo page for the Australian weekend box office covering the four-day period from 13 to 16 January, 2022. Scroll down – way down – and there at #28 is the entry for Gold.

Consult your calculator app and that works out to $274.1 per theatre over the four days, which averages out to $US68.50 per screen per day.

Convert to Australian dollars and that’s $97.75 per screen per day. Divide by the average cost of a movie ticket, which is around $15, and that gives you 6.5 people watching the film per day at each of 10 screens across the four days.

Still, the math here might be faulty. If so, please let us know.