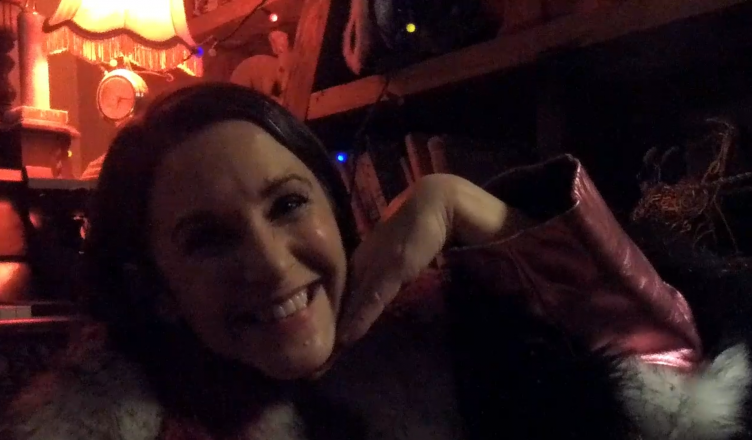 Anyone expecting a cautionary tale from the boisterous self-portrait Lucy Best presents of herself will be sorely disappointed. And, in a way, that’s a good thing.

Indeed, one of the intriguing qualities to her very funny one-woman show about a middle-aged mother owning up to her behavioural excesses is how resolutely unapologetic or regretful she is.

Best is not so much a reformed character or even a redeemed one, but someone who has realised the wisdom of hindsight and come to the startling conclusion that the life of shame she has lead is not, in fact, anything to be ashamed about.

There’s no real need for a content warning on Disgraceful. Though Best’s life has been full of sex and drugs and drinking there’s no undue emphasis on these vices, though one hungers for a little more detail.

Much of the show is a recounting of her life, from her colourful youth where she went from being shy to being expelled, her move to Australia and into motherhood.

As a voyage of self-discovery, the show offers an admittedly limited exploration. Sex and drugs are often mentioned but usually in passing and mainly for gag value, all in keeping with her father’s advice about how it’s “one thing to be naughty, it’s another to get caught”. Wise counsel to a young girl from a Lord.

The deepest Best goes into herself involves her GAD issues – Generalised Anxiety Disorder – and her self-criticism as a mother.

In the funniest part of the show Best acknowledges the difficulties of combining the stresses of motherhood with a love for recreational sex. Afternoon delight is fine, as long as you keep your children fed. In one of the show’s best lines she quips how “the thing about having kids is that if you don’t meet their needs, they die”.
.
With a few notable exceptions, Best’s delivery is surprisingly clean. There are barely any swear words or vivid descriptions of her social misadventures which, again, leaves one hungry for more detail. Nonetheless, her golden account of giving birth hits home.

Disgraceful is a well-paced, highly structured, robustly upbeat show, full of laughs and a few insightful nuggets about being a rebellious teen and an unconventional, fun-loving adult, with Best’s on-stage persona being especially warm and affable.

As consistently funny as the show is, however, the buoyant tone could do with a touch more grit and grey. One does sense there’s an underside to her story she’s keeping shtum, which grinds a little for a show predicated on being revelatory.

Best appears to have had a swell time with all the sex and drugs and drinking, yet it’s hard to believe there’s been so little downside, or at least a few awkward morning-after conversations that went beyond discussion of the age difference between her and her latest conquest.

Given that she has clearly come through it all unscathed and upbeat, one also wonders how big a part luck has played in her life. It’s food for thought in the afterglow of the show. For all the fun and lightness of Disgraceful, there are spots where she could afford to dig just a bit deeper.

There’s a lot of audio-visual content in the show, with a screen popping up with captions and photos on cue. No tech issues were encountered.

Best suffered only one flub in her otherwise slick delivery, wisely leaning into it for an extra laugh. Not bad going given it was her very first performance of Disgraceful, and a night before it was meant to be reviewed.

If there’s one aspect she needs to pay attention to it’s her closing song. Well, not so much the song itself, but her singing voice, which could do with some polish.

Reacting strongly to the show, and braving a chilling pre-Winter evening, was an appreciative crowd of about 30 souls, around half of whom (to Best’s own estimate) were friends and creative associates.

After selling some merch and with drink in hand, Lucy Best was kind enough to take to a couch and chat about the origins, meaning, and development of Disgraceful, as well as a few other things about feminism, sexual activity and Mae West.

Disgraceful is on at The Butterfly Club until Saturday 4 June, 8.30pm. Tix & info.