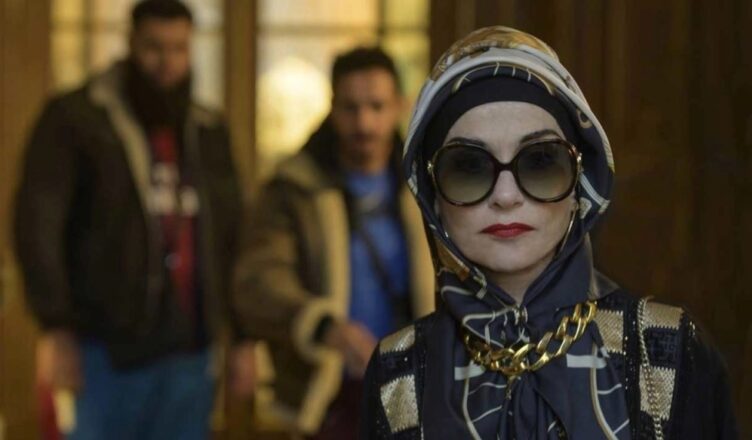 Glassy eyed: Isabelle Huppert plays a cop-turned-crim in the comedy ‘The Godmother’.

THE GODMOTHER (104 minutes; subtitled) M
As we all know by now post-Breaking Bad it’s not always greed that pushes people into criminal activity but sheer necessity.

That’s the case with the wonderfully named Patience Portefeux (Isabelle Huppert), a translator who transcribes tapped phone lines, providing critical information to her colleagues in the French narcotics squad so they can raid apartments and seize drugs.

With her frail mum in expensive care and pressure from her building manager to pay her fees Patience hits upon a brilliantly loopy scheme; rather than pass on valuable information about an especially lucrative drug deal she uses it to acquire a huge amount of hashish.

Storing it securely in her building’s strong room, she dons a disguise and starts making deals with the low lifes she’s meant to be informing on.

It’s an amusingly hairy proposition for Precious as she tries maintaining her cover while negotiating with slow-witted criminals who wouldn’t blink if a brick dropped on their head.

Complicating matters is that her adoring partner Phillippe (Hippolyte Girardot) also happens to be in charge of the narc squad, and when he inevitably gets wind of this swish new arrival on the drug scene he doubles down in trying to nab her.

While keeping a playful lightness of touch throughout, director Jean-Paul Salomé – who co-wrote the screenplay with Hannelore Cayre, author of the novel the film is based upon – doesn’t press down on the comedy pedal as hard as an American director probably would.

This allows him to tease out the comic nuances as Patience tries balancing her life as a cop with her new side-gig as a drug trafficker, building to a nifty, well-directed sequence where Phillippe and his team start closing in on their mysterious new drug kingpin.

As usual, Huppert is splendid, easily selling Patience as a woman forced to conceal her desperation behind a veil of feigned confidence.

And as well as being one of France’s most accomplished actresses, Huppert, now 68, is also one of its most beautiful and, like Catherine Deneuve, 77, has aged like fine wine.

Here she plays a character about 20 years younger and she pulls it off, admittedly with the help of a little make-up and some generous lens filters. Oh, and no facework, apparently.

The only snag with the film is the dull title. Internationally the film is known as Mama Weed. Why on Earth wouldn’t you go with that?