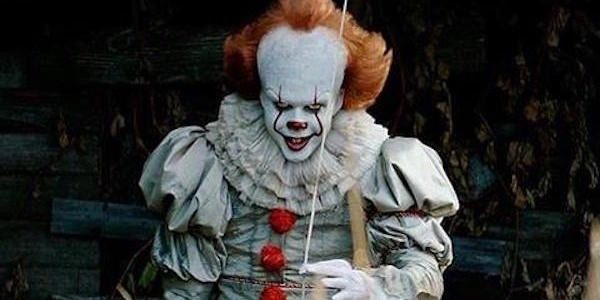 IT ***1/2 (135 minutes) MA
Be warned: if you happen to love clowns It will cure you of that condition quickly and with brutal efficiency. That, of course, only applies to those who did not contract coulrophobia from either seeing the 1990 It mini-series or reading the 1986 Stephen King novel on which both films are based.
Tim Curry, best known for The Rocky Horror Picture Show, first played the evil, other-worldly clown Pennywise, who specialised in freaking out kids, then following them into adulthood to freak them out even more. Here, Bill Skarsgard does a superb job filling Curry’s oversized clown shoes.
It is a fabulous, top-grade remake and, thankfully, it takes its time.
Carefully directed by Andy Muschietti (who proved his chops with the 2013 spookfest Mama) the film is heavy with atmosphere in telling about a cursed small-town that suffers a tragedy every 27 years when the mysterious Pennywise creature appears to create havoc. Feeding on the fear of his victims and bearing an alluring playful manner, these parts of the story, that get quite violent, will have you biting into your knuckles.
Alongside the horror, though, is the terrific story of “The Losers”, the small gang of outsider teens who form a friendship after being brought together by the town’s mystery. It seems a mark of respect to the 1990 version that Muschietti doesn’t blow off or truncate these parts of the story, which are essential to making the film’s finale work, as well as laying the groundwork for the proposed sequel in which the child characters are revisited in adulthood by Pennywise. (The mini-series did cover this part of the It story.)
If only all remakes were made with this kind of care.

GOD’S OWN COUNTRY *** (104 minutes) MA
On a dank and windswept Yorkshire farm Johnny (Josh O’Connor) toils away in grim isolation, thanklessly trying to help his frail father while trying to figure out where his nowhere life is going.
Sorely needed help arrives in the form of Romanian immigrant Gheorghe (Alec Secareanu). Out on the cold, unforgiving moors an attraction slowly thaws through their initial, intense disliking of each other.
Though the film is being widely compared to Brokeback Mountain, writer/director Francis Lee actually creates a far more believable and sympathetic scenario. Strongly atmospheric, Lee isn’t afraid to push his young actors, both in expressing their passion and in fulfilling their often demanding duties in the cow shed. It’s a very pungent, convincing drama.
God’s Own Country has enjoyed great success on the international festival circuit and has confounded Lee’s modest expectations by being sold across the world. The film has won him awards at the Sundance, Berlin and Edinburgh festivals, as well as taking out the audience award at the Frameline41 International LGBT Film Festival.

NAMATJIRA PROJECT ** (90 minutes) M
There’s no arguing that culture-shifting indigenous artist Albert Namatjira deserves all the tributes he can get – where is the feature film about his extraordinary life? – yet this unsatisfying documentary feels too much like a rough cut of a TV program in need of a 30-minute shave.
Archival snippets about his work and influence are so brief we get little real sense of his art and its impact. We do, however, get way too many behind-the-scenes insights into the rehearsals for the play about him.
A key theme here is the issue of copyright, and how Namatjira relinquished it for a few thousand dollars, thus depriving his family of the long-term benefits of his art. It’s an on-going concern and the film is, quite sensibly, being used to further the case for a hand-back, though we still get too little detail about that or the likelihood of the issue being settled.
A disappointing film that will likely play much better on free-to-air TV, so it’s hard to honestly recommend forking out $20 to see it.

THE DINNER *** (121 minutes) M
Solid, dialogue-driven drama featuring a terrific quartet of performances as two warring upper-class brothers – one an aspiring, aged, politician (Richard Gere); the other a short-tempered college professor (Steve Coogan, brandishing a pinched American accent) – who meet for dinner in one of those plush restaurants where the waiter explains the backstory behind each item. In tow are their long-suffering wives (Rebecca Hall; Laura Linney) who are also ready for verbal warfare.
The jagged object of discussion is how best to deal with an incident involving one of their children and a possible case of murder. With one brother on the verge of an election and the other suffering from severe anger management issues the sparks go flying in all directions, with Coogan proving especially apt at dishing out abuse to the wait staff.
With a keen sense of how to keep so much verbiage watchable, director Oren Moverman (Rampart; The Messenger) builds tension to near-boiling point before pulling back. He also cuts away to flashbacks that flesh out the family history and the horrific crime involved as the evening develops into the dinner from hell.
This is the latest in a string of strong, performance-rich films from Richard Gere, including Hachi, Arbitrage, Norman, The Second Best Exotic Marigold Hotel and The Benefactor. He really seems to be thriving in this chapter of his career.

THE LOVERS * (97 minutes) MA
Dreadfully dull romantic comedy in which a long-married couple (Debra Winger; Tracy Letts) feel renewed passion despite each being unfaithful. Aimless performances and an inert story make for a punishing hour and a half.

VOYAGE OF TIME * (40 minutes) G
The once-great Terrence Malick (Badlands; Days of Heaven; The Thin Red Line) has soured of late (The Tree of Life; To the Wonder; Knight of Cups; Song to Song) and this IMAX film is yet another sign of his decline.
With a pretentious voiceover by Brad Pitt, the film purports to take us through the entire story of time. There are some cool images from the air and in the sea, but a lot of the film is composed of magnified footage of chemicals mixing, which is supposed to approximate what ballooning galaxies look like.
Malick, genius that he once was, claims to have worked on the concept for this film across 40 years yet it somehow has a slapped-together feel. IMAX may well be part of the future of cinema – that’s a serious comment given the expanding network, better quality films, better giant-screen image quality and IMAX’s love affair with a billion Chinese filmgoers – but hopefully faux-documentary films like this one will quickly become a thing of the past.
Bemusingly, there is apparently a 90-minute version of this film narrated by Cate Blanchett. It begs the question, why not just release that one?

THAT’S NOT ME *1/2 (86 minutes) MA
It’s starting to feel like the 1980s again, with too many Australian films looking and sounding like they needed more script development time and more production money. This valiant attempt at a mainstream, feel-good comedy is the latest example. It’s a lovely idea that just falls flat.
The premise screams with comedy potential. Alice Foulcher (who co-wrote the screenplay with director Gregory Erdstein) plays Polly, a failing small-time actress who fears she is on the verge of falling off the bottom rung. She is constantly being mistaken for her twin sister Amy (also played by Foulcher), who is also an actress and is on the fast-track to success in Hollywood.
Unfortunately, Amy remains out-of-frame for most of the film. This was a big mistake as it leaches the film of comic tension. All we hear is Polly moaning, which quickly becomes tiresome. Coupled to this is Amy’s high-profile relationship with Jared Leto (who had nothing to do with the film, the final credits stress).
With the abyss of failure staring her in the face, Polly makes a do-or-die decision and heads to Hollywood for “pilot season” (when auditions are held for new TV shows). There she stays with another struggling Aussie actress Zoe (Isabel Lucas), whose brazen attitude and mild-IQ accounts for the film’s funniest moments.
Watching somebody flail and fail is, of course, a comedy mainstay but we simply spend too much time watching Polly strike out while envying her mostly invisible sister and putting up with the mild irritation of her parents, two bland characters with very little comic verve (under-played by Andrew S Gilbert and Catherine Hill).
There was emerging hope that Australian films without decent third acts was going to be a thing of the past, but That’s Not Me is essentially a two-act story that begs for a decent resolution.
To her credit, the obviously talented Foulcher does her best carrying the film. Unfortunately, she spends too much time trapped in Polly’s sad-eyed character, thus depriving us of seeing her stretch into Amy’s personality. Oh, the fun this film could have been.
Apart from not having the budget to fully realise the idea, there are also too many signs in the film that the screenplay probably needed at least another draft or two.
Aside from not having more of Amy in the story, here are a few: Why have a real star such as Jared Leto as Amy’s boyfriend? Why not create a fictitious one and make him part of the story? How does Polly not know that “pilot season” is over when she arrives in Hollywood to audition?
Indeed, why have a Hollywood location shoot in there at all? Surely localising the story – keeping Hollywood as the dream destination – would have allowed the film’s comic ideas to breath and for Polly and Amy to clash more often.
And to again labour a point that applies to way too many Australian films, That’s Not Me has appeared out of nowhere, and will no doubt head back there before anybody knows about it.
Marketing, people. Films need to be marketed. Making a film without letting the public know it’s out there defeats the purpose of making it in the first place.
Well, almost.