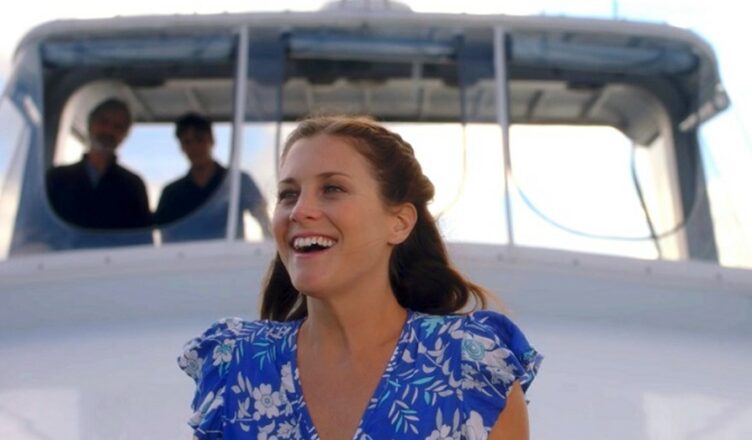 Who’s that girl?: Allira Jaques plays a mystery woman in ‘Love You Like That’.

In the latest excruciating example of an Australian genre film that apparently has no idea what it is doing, Love You Like That is an embarrassing muddle of missed opportunities, story holes, wild shifts of tone, wince-worthy dialogue, thin performances and a premise that doesn’t start to cook until five minutes before the credits roll.

On the beach of a cute little coastal town, local man Roy (John Jarratt, one of many talents wasted here) comes across an unconscious young woman (Allira Jaques) suffering from memory loss – or so it seems.

After being taken in for medical care a mystery builds around the ever-smiling woman, who has been given the beach’s name Mim.

Who is she? Where did she come from? Why is she here? What is her purpose? Why do people feel strange in her presence? What’s her scheme with young ladies man Harrison (Mitchell Hope, from the Descendants franchise)? What’s her association with the ageing town patriarch Gerard (veteran Chris Haywood, also wasted)?

Here’s the answer to all those questions: who cares?

You know that old chestnut reviewers use about how a film is so poorly rendered that you don’t care whether the characters live or are suddenly flattened by a meteor? Well, that applies here.

Written, directed and produced by Eric C. Nash, what unspools often feels like photographed rehearsal footage, as though the cast and crew were filming some ideas for a better movie.

Rather than go into thesis mode about why Love You Like That is so woeful, here’s one aspect of the film that soundly illustrates just how misjudged and wrong-footed the film is.

Because it’s all about love and romance and bonding and such like, the film strains to work up a sweet, congenial, nice, family-type vibe, with lots of talk about emotions and feelings, etc.

Yet occupying a big slice of the movie is Emily (Steph Tisdell), a largely superfluous supporting character who works with Harrison. She’s a larger-than-life man-eating motormouth who swears so much she’d make Jack Nicholson from The Last Detail blush.

So, the big question: what is such a repulsive vulgarian doing in the middle of this movie?

Emily talks like she dropped in from a bad girls-behaving-badly film. What is she adding to the story? How does all the F-bombing help? If they, and all the other curse words, were, say, funny that’d be different. But they’re not. And neither is Emily.

Such cluelessness again raises the question: where is the person in the production process whose job it is to step up and say: “this just doesn’t work”? Does such a position even exist? If not, why not?

Another thing: for those who actually see this motion picture, consider this: wouldn’t the story’s premise have worked better if what happens in the last five minutes happened in the first 15? Just some thought food.

At the other end of the year we had Moon Rock for Monday, a dreadful Australian film that shares a lot of qualities with Love You Like That.

It’s 2021, folks, and while the Australian film industry can produce huge hits such as The Dry, that it can still pump out films as bad as Love You Like That is a major worry.

And for the record, it’s a mini-nightmare writing film reviews such as this one. It doesn’t win you any friends, or favour, makes the people who hate you hate you even more, plus it creates the impression that you’re some withered old curmudgeon – which is perfectly true except for the last part.

It’s purely out of a love for cinema, especially Australian cinema, that bad films must get the reviews they deserve.

Please, somebody, make it stop.