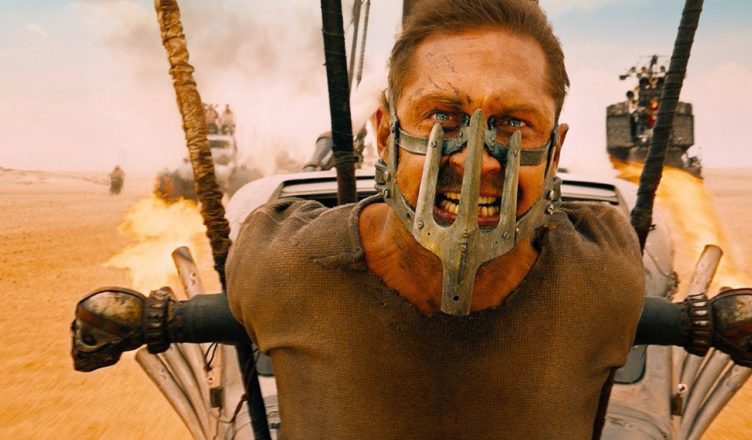 The new Mad Max movie is called Mad Max Fury Road and it is a perfectly fine time killer.

There’s plenty of motion, stunts, explosions, visual effects and wonderfully weird post-apocalyptic images, characters and design to keep most reasonably minded filmgoers happy as they munch on their popcorn, sip on their drinks and think about their grocery list.

Anybody expecting more than that, however, might find themselves short changed.

The original Mad Max trilogy – and the first two films especially – are rightly regarded as standard setting, game-changing classics. Yet while it bears the brand name and tries very hard, Fury Road can’t quite honour the legacy of its forebears. It’s fine B-grade mulch, but it’s certainly no masterpiece.

The new adventure finds Max (played by the ubiquitous, and somewhat miscast Tom Hardy rather than the original’s Mel Gibson) a loner with a suped-up car in a wasteland filled with motorised marauders. His only purpose is to survive.

At first he is captured by the manic minions of King Immortan Joe (Hugh Keays-Byrne, aka Toecutter from the first film, but not playing the same character) before joining forces with renegade truck driver Furiosa (Charlize Theron).

A post-apocalyptic feminist warrior with a marvellously rendered artificial arm, she’s done the dirty on Joe, the evil overlord of the region, by stealing his five young slave wives and speeding them off across the desert to a new land and a new life. Max helps them traverse the sands, with their enemies in hot pursuit.

When vehicles aren’t kicking up dust trails and crashing against each other at high speed, the soundtrack throbs anxiously as Max and Furiosa negotiate their next move, ever-wary of the giant vehicles in the distant heat haze heading their way.

And that’s pretty much it. Essentially, Fury Road is a prolonged chase with a few rest spots.

As such, it’s well-mounted and deeply atmospheric, with occasionally great cinematography by John Seale.

Especially impressive are the bizarre vehicle designs, which look like beautiful mechanical mutations, or artworks on wheels. One item even looks like a distant relative of the spiked VW from Peter Weir’s 1974 film The Cars That Ate Paris.

That said, it’s surprising, and a tad disheartening, how readily Fury Road falls into line with so many other production-line blockbusters.

Given how distinctive and inventive the action scenes in the original films were, it is disappointing that so much of the mechanical bump-and-grind here lacks any real spark or originality.

Men fly about on poles, gunfire is exchanged, people scream and the mandatory fireballs send vehicles twirling into mid-air – an exhausted action-movie cliche that really needs to be retired.

And for all his supposed genius, original director George Miller has slavishly adopted the standard editing rhythm of the standard 21st century tentpole movie, with a cut every second or so. Even Michael Bay holds shots longer.

So what is the film trying to do? In a way, the answer is in the film’s prolonged chases, which serve as a metaphor for the film itself.

Whereas the original trilogy set the pace in the early 1980s and influenced everything from The Terminator to Waterworld, Fury Road is more a case of Mad Max trying to catch up and prove itself worthy.

The brand once set the bar. Now it is trying to reach the bar set by others. And as moderately exciting and frame-filling as its explosive set-pieces are, they don’t quite make it.

There’s nothing in Fury Road, for instance, that matches the brilliance of the chases in Matrix Reloaded, To Live and Die in LA or even Quentin Tarantino’s Death Proof.

The Fast & Furious franchise is another telling point of comparison.

Since the fourth one in 2009, the F&F series has established itself as the dominant brand for automotive mayhem through its house style of elaborate stunts and preposterous, digitally-assisted action. Sworn to continually top the previous film, they are full of kinetic images and ideas we’ve never seen before.

Fury Road can’t make that boast. The very cleverly edited trailer certainly builds that expectation, but the prangs and demolition on show are, at the end of the day, pretty standard. There’s certainly nothing that tops what we saw in the finale of Mad Max 2, which still stands as the franchise’s golden hour.

The film might prove especially infuriating to hardcore Mad Max fans who have invested so much in the mythology.

Like so many blockbusters, Mad Max Fury Road is essentially a two-act story stretched out to feature-length running time. With an unmotivated Max, the film feels dramatically hollow as it is only other people who compel him to act.

He’s a cypher in the Wasteland with no real purpose. He only has a few scant lines of dry dialogue, but nothing as punchy as his classic line from Mad Max 2: “You wanna get outta here? You talk to me.”

Anticipation for this film has been so high it seems some commentators aren’t quite sure what they’e looking at.

Example: there’s already been some careless talk about Fury Road being a reboot.

For the record, it’s not a reboot because it has flashbacks to the original films. Plus, as we all know too well by now, to reboot a franchise you need to have an origin story. This film simply drops us into the familiar post-apocalyptic world we left Max in at the end of Thunderdome.

Might Fury Road have been better as a proper reboot? Perhaps. Was it a mistake to make a Mad Max film without Mel Gibson, who created the role? Perhaps. After all, you’d never make a Dirty Harry movie without Clint Eastwood.

Gibson was involved with earlier plans for the fourth film, but after too many delays and the passage of time he eventually counted himself out.

Just a thought, but how cool would it have been to have him play Max at age 60, still humping around the Wasteland, still fighting the scum, still angry. It would have given the enterprise the mythological heft and powerful sense of continuity that Fury Road lacks.

It’s understandable how some audiences – presumably younger ones that did not grow up with the original films – might be a little suspicious of a franchise that tries firing up after being dormant so long.

That was certainly the case with Star Wars Episode 1, The Phantom Menace. But as with that film, it’s likely that the anticipation, the legacy and the affection for the original films will earn Fury Road a lot of free passes from forgiving filmgoers – provided, of course, that there is more to come.

And, of course, there is. Miller is planning more Mad Max films. He even has two screenplays completed, apparently. Let’s just hope he give Max a lot more to do the next time around than follow somebody else’s lead.

With its tongue pressed firmly in its cheek, A Royal Night Out is a prettily decorated, politely outrageous piece of cinematic confectionery, a carefully balanced, souffle-light slice of historical fiction that has a great deal of fun playing with the truth by dropping two real-life princesses into a fictitious teen romp.

The gossamer of fact upon which this merrily mounted lark is based is that on the evening of 8 May 1945 – aka VE Day, the end of the war in Europe – the young, radiantly beautiful future Queen of England, Princess Elizabeth (Sarah Gadon) and her high-spirited, if not-quite-so-beautiful, never-to-be-Queen sister Margaret (Bel Powley) talked their parents Queen Elizabeth (Emily Watson) and King George VI (Rupert Everett) into letting them out of Buckingham Palace – where they’ve been cloistered – and into the celebrating throng.

Accompanied by two of the British army’s most incompetent officers, the girls are soon off the leash and on their own, drinking, dancing and mixing it with real people.

It’s an eventful evening of character-building adventure: Elizabeth is on a mission to gauge the true mood of the people and to see how the King’s radio speech has gone down.

Hooking up with an angry soldier Jack (Jack Reynor) who is absent without leave, Elizabeth also goes through a reality check as she has her beliefs challenged and witnesses the scale of loss London has suffered.

Meanwhile Margaret is merely intent on following every available distraction, fully aware that nobody takes much notice of what she does anyway.

There is much running, yelling, drinking and falling over, chiefly in the seedier parts of town, but while director Julian Jarrold – a period film specialist with Becoming Jane, Brideshead Revisited, The Girl, All the King’s Men and Great Expectations – effectively works up a wild-party vibe, he knows not to cross certain lines. After all, he’s toying with the reputation of real Royals.

The film is plently of fun – seen with a cinema full of senior filmgoers, every comic beat hit its mark – and while it’s not intended to do so, A Royal Night Out will no doubt deeply irritate those republicans who would rather not see the royals celebrated.

Indeed, the timing of this enjoyable little film – made independently on a modest budget – is difficult to fault.

It is certainly tapping into the mood of the room.

The 70th anniversary of VE Day has just ticked over; the Queen is more popular than ever; Prince William and Princess Kate have just had a kid – a girl, Charlotte, no less – and the new generation of young, attractive, media savvy Royals appear to be bringing a new generation of supporters into the royalist fold.

In addition, royal fever in Australia continues to swell, mocking efforts by the increasingly weak Republican movement to ditch the monarchy.

The director swears all this is very happy coincidence. No doubt it is, but it’s also very telling that, this deep into the 21st century, a film about the teenage shenanigans of two princesses would have any appeal at all.

And along with The King’s Speech and The Queen, A Royal Night Out could well be part of the start of a process of mythologising and humanising the cinematic image of the Queen. After all, it’s happened with every other monarch, and this one has certainly done enough to warrant the enduring attention of filmmakers.

On the news that they’re going to have a baby, an estranged couple, Eve (Camille Keenan) and Charlie (Dustin Clare), walk about the earthquake-shattered city of Christchurch trying to piece together their relationship, hoping the other will compromise enough.

Deftly directed by Kiwi Michelle Joy Lloyd, Sunday is a modest, neatly etched character study of two people in transition. Clearly inspired by the conversational style of Richard Linklater’s Sunrise trilogy, the film could have done with a few more ill-mannered arguments before hitting home with its touching finale.

Sunday has made a small but significant step into the history books by being the first film in Australia to be released simultaneously in cinemas and on a wide range of digital platforms.

With this must come a new way of reviewing films with this release pattern. As a value-for-money person, this reviewer always considers the general cost of admission to a cinema and the associated bother when reviewing a new release, as they are always in cinemas.

This does change when reviewing things for the home market, as the costs are lower while the convenience is greater. Therefore, something that might not be worth seeing in cinemas might nonetheless make for a better, more economical experience as a home release.

And the experience of watching something at home is markedly different, with ambient noise, distractions and the ability to watch things on screens of varying sizes.

In the case of Sunday, is this low-budget two-hander worth seeing in the cinema for about $20 a ticket? No. But seeing it for a few dollars via a digital platform, most definitely.