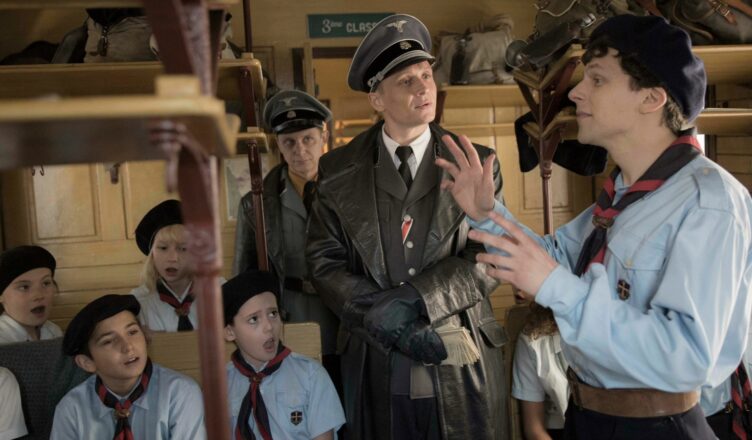 RESISTANCE *** (121 minutes) M
It’s gratifying when a film puts something on the record about a famous person that is not as widely known as it should be, even if the tribute has come a bit late.

French performance artist Marcel Marceau was renown for not just being the unquestioned master of the art of mime, he was so revered and, frankly, so damned good at creating worlds out of thin air to adoring audiences that he was seen as the very embodiment of the artform.

As a young man establishing himself on the French stage, Marceau (who died in 2007 at 84) was swept up, like everybody else, with the invasion of France by the Nazis, which happened soon after Hitler invaded Poland in September 1939, triggering World War 2. (Was that historical reminder really necessary? Probably.)

He became part of the fabled French Resistance against the occupying forces and helped save thousands of Jewish children from perishing in the Holocaust by taking them to neutral Switzerland.

This heavily fictionalised, highly adventurous account of Marceau’s younger life does a pretty solid, if workman-like, job honouring the bravery he and his compatriots showed during the occupation of Lyon by the Nazis. This dreaded period was marked by the reign of the infamous high-ranking Nazi officer Klaus Barbie, known as the “butcher of Lyon” for the enthusiasm with which he tortured and killed prisoners brought to him by the Gestapo and the SS.

As Marceau, Jesse Eisenberg (The Social Network) adds to his run of impressive, range-stretching recent performances (The Hummingbird Project; Vivarium; The Art of Self-Defense; Zombieland: Double Tap), speaking in a convincing French accent and mimicking the mime so well that in one early scene he really does look like he is walking in the wind.

The usually talkative, fast-mouthed actor is more verbally restrained here, though his physical energy seems a perfect fit for the part.

Still, playing a sympathetic, legendary real-life war hero is, for all the effort Eisenberg clearly brings to his portrayal, a comparative walk in the park.

He has a lovely character journey: Marceau goes from being apathetic to becoming courageous; he looks pretty (perhaps a bit too pretty given wartime deprivations); plus he gets to have a romantic interest.

The most praiseworthy performance in the film, to be honest, is put in by young German actor Matthias Schweighofer (Kursk; Valkyrie; also credited as a producer on Resistance), who has to inhabit the dark soul of the sadistic Nazi Barbie.

This guy is a real piece of work. He’s got a beautiful wife and a new-born baby girl who he wants to grow up and become an artist while his day job involves personally executing captured members of the Resistance in an empty swimming pool and using horrific methods of interrogation.

There is some dramatically necessary violence in the film, but director Jonathan Jakubowicz (who also penned the screenplay) is careful to keep things on the right side of graphic. Nonetheless, he delivers quite a punch in one genuinely frightening torture scene where Barbie’s threatening words are almost as bad as the deed he plans to commit on a female prisoner. It is a tough scene to sit through in what is otherwise a very watchable film.

Resistance does suffer from a rather pat, hard-to-swallow finale – why do the Nazis suddenly become such bad shots? – and, especially irritating, is how the film goes really easy on those collaborators in Vichy France. These ghastly people were happy to sell their friends and acquaintances out to the Nazis in exchange for security and a special little pin that gave them freedom of movement.

That said, Resistance is a good film and a worthy tribute to the noble work and huge risks Marcel Marceau repeatedly took before he became famous. Marceau was duly honored for his wartime service, it’s just a pity he didn’t live long enough to see this fine movie version.

Footnote In fairness to fans of Marceau’s work, it needs to be noted that this handsomely produced film features only a smattering of mime. There are some nicely directed moments where Marceau performs, which occur in the first part of the film. So, just to be clear, Resistance is a wartime drama, not a film about mime.