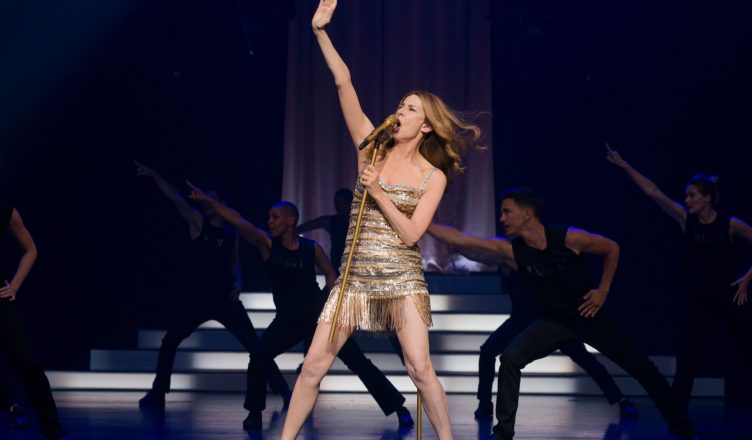 ALINE *** (126 minutes) M
A very entertaining, admittedly odd film – nothing wrong with that – Aline is based on, inspired by and obviously about Canadian songstress Celine Dion, though it’s technically a “fictionalized” account of her life and loves – well, love. (She only had the one.)

The resoundingly talented, famous-in-France personage Valérie Lemercier pulls off a remarkable feat here: she not only directs the film with great energy and comic shading, she also portrays Aline, the Celine-substitute main character, from childhood to full adult, with a little digital assist.

Now, it’s an observation of no great perspicacity that those with a huge emotional investment in the life and career of world-conquering Canadian songstress Celine Dion are going to care a lot more about how accurate the film is than those who chiefly regard her as the woman who sang the theme to Titanic.

That said, and despite some pushback from the Dion family – though, interestingly, not from Celine Dion herself – the film seems to get the broad strokes right.

The youngest in a huge family, Aline gets into music early and finds great support from her parents, especially her mother who became her manager.

The film leans very heavily on how Aline/Dion, talented and driven as she was in her youth, was not exactly a classical beauty, something not helped by having a mouthful of mis-aligned teeth.

These issues are dealt with, rather comically, as her “star” image is carefully moulded by her producer/manager/much-older romantic interest Guy-Claude Kamar (Sylvain Marcel), avatar for Dion’s real-life manager/lover René Angélil.

The unlikely romance between the two is central to the film, incorporating the huge issue Aline’s mother Sylvette (Danielle Fichaud) had with the idea of her precious young daughter being so totally in love with such an fat, old, hairy slob of a man, whose photo she loving keeps hidden under her pillow (a real-life detail nailed by the film, apparently).

But love conquers all, even in the face of fertility problems, throat issues and a schedule so busy her Vegas residency doesn’t allow her time to go out and walk the streets.

There’s a real drive to the film; as a director Lemercier certainly knows the value of a well-judged jump cut, striding through the story without making it feel episodic.

As an actress she knows how to dominate the frame; she might have a slight frame but she’s got a big (dubbed) voice and a bigger personality that carries this faux-kind-of-isn’t-but-really-is-biopic with sumptuous flair.

The film was a big hit in Canada and especially France where it was big at the box office. It’s nominated for 11 César awards including Best Film, Director, Actress, Supporting Actress & Actor, Original Screenplay, Sound, Costume/Set Design and Visual Effects (mainly for making the mid-50s Lemercier look like a teenager).