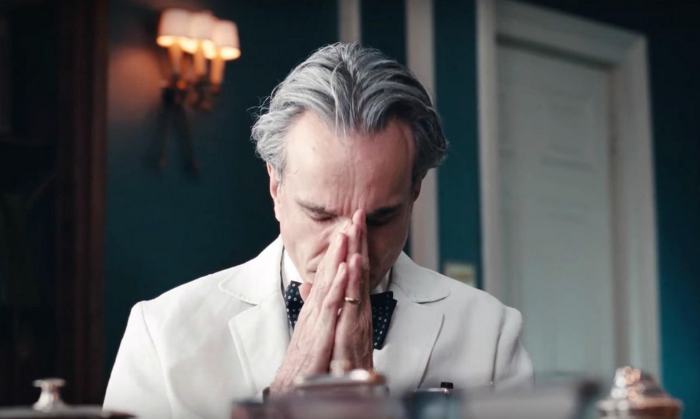 PHANTOM THREAD **** (140 minutes) M
It’s some credit to writer/director Paul Thomas Anderson that he could delve into the rarefied, hushed world of 1950s high fashion and produce a film as cinematically rich and dramatically magnetic as Phantom Thread.

In creating the fictitious story of London dressmaker Reynolds Woodcock (Daniel Day-Lewis), Anderson presents a quietly proud man who had reached a pleasant plateau in life, presiding over a high-end fashion house with a dedicated staff of seamstresses and an exclusive clientele of extremely rich people who come to him for adornment in exquisitely designed and custom-fitted garments.

It’s a highly controlled, contented world that he runs with his loyal sister Cyril (Lesley Manville) where everything, from his selection of fabrics to his breakfast routine, must be kept just so.

While on holiday he encounters Alma (Vicky Krieps), a beautiful young waitress who enchants him while serving him breakfast. She awakens his romantic side and he falls in love with her, but making room for her in his strictly ordered life generates an increasing amount of tension. Even an interruption with a cup of tea can disrupt his schedule and sting his psyche.

It falls upon the beleagured Alma – whose resentment from Cyril recalls the tensions in Alfred Hitchcock’s Rebecca – to decide just how best to love this brilliant, stubborn man. She arrives at a solution that proves, yet again, how dark deeds never stand between the heart and what it wants.

Anderson remains one of Hollywood’s most unpredictable and gifted movie stylists, with Boogie Nights (1997), Magnolia (1999), Punch-Drunk Love (2002), The Master (2012) and There Will Be Blood (2007) testament to a signature-defying range few can match.

For the first time, and because his regular go-to guys were unavailable, Anderson oversaw the film’s cinematography himself, though with the help of his usual shooting and lighting teams. The result is a film that often looks like a moving work of art, as though perfectly composed still life images have been brought to shimmering life.

We don’t usually associate fabrics, needles and sewing machines with visually beautiful cinema, yet here we witness the alchemy of the camera. It really is gorgeous to behold.

In an admirable display of ego negation, Anderson felt he did not deserve a cinematographer credit, so none appears on the film. Consequently, the film’s luscious look couldn’t be nominated for an Oscar, though the film has been nominated for best film, director, actor, supporting actress (for Manville), original music and costume design.

For his part, Daniel Day-Lewis – who won a best actor Oscar as oilman Daniel Plainview in Anderson’s remarkable 2007 period film There Will Be Blood – has said that this will be his final film as he heads into an early retirement at 60. There’s been a lot of carping about this, but while we’d all love it if he kept on producing brilliant, Oscar winning work – he also won for My Left Foot (1989) and Lincoln (20212) – there’s wisdom in following the example of Seinfeld’s George Costanza by going out on a high and leaving them wanting more.

PT Anderson interview
Since Boogie Nights, his comedy/drama about the pornography business in the 1970s and ’80s, Paul Thomas Anderson has emerged as on of America’s most distinctive and daring directors. Here he speaks about the making of Phantom Thread and how he and Daniel Day-Lewis worked without rehearsals.

Vicky Krieps Interview
Born in Luxembourgh in 1983, actress Vicky Krieps was spotted by Anderson in the small 2014 German arthouse film The Chambermaid Lynn. He subsequently sent her the script for Phantom Thread, though when she sent in her audition tape she didn’t know it was for a major Hollywood film. Here Krieps discusses what it was like making her first English-language film and what it was like acting opposite Daniel Day-Lewis.

As played by the ever-versatile Jessica Chastain, Bloom is a put-upon woman who, after being told she has no place in this man’s world proceeds to own it, almost out of spite and definitely for the millions it will earn her by working for herself.

An absorbing, adult drama, Molly’s Game is also a cautionary tale about how those brave enough to skate on thin ice have little cause to complain when the ice breaks and the instant chill of reality bites into your backside.

A few longeurs aside, the dialogue crackles with wit, revelation and drive as Molly brilliantly manipulates the world around her until the law comes crashing through the door. Sorkin has a love for moving cameras (bless him) and prods this long movie along at a very decent clip. There’s little doubt, on the basis of this, that he’ll be helming more of his own screenplays.

After Zero Dark Thirty (2012) and Miss Sloane (2016), Molly’s Game chimes in as the third long-form character study for Chastain where her strength in exposing the underside of a character are in full, glorious bloom. She somehow missed out on an Oscar nomination for her work here (she’s been nominated twice before for The Help and Zero Dark Thirty) but the performance is easily of that calibre.

THE JUNGLE BUNCH **1/2 (82 minutes) G
From France comes a pleasant, disposable animated adventure about a penguin that thinks it’s a tiger who must save his island home and all his friends from a koala intent on blowing the place up.

Based on the successful TV series, the animation is lovely, the visual gags plentiful and the running time mercifully brief, given how predictable the story quickly becomes.

It’s a worthwhile, colourful dollop of time-killing family fodder that honours the tradition of anthropomorphised animals set in train by Disney and later pushed by Dreamworks with the Madagascar series.

But adults beware: whereas most animations these days feature a layer or two to cater to grown-ups while delighting the kids, The Jungle Bunch doesn’t offer that kind of engagement. Thus you might find yourself doing something you’re not supposed to do in a film like this, which is think.

Specifically, the koala character Igor is awkwardly placed here and might draw unintended sympathy. His motive for destruction isn’t really evil, but harks back to how he was rejected for membership to the Jungle Bunch because of a few personality quirks. He is repeatedly thrown out and even exiled to another island, where his isolation fertilizes his dark side.

Also, Igor turns out to be a self-educated genius of sorts, inventing explosive mushrooms that give him the power of flight.

Precisely why he deserves to be cast as the villain when all he wanted to do was be part of the Jungle Bunch team is a tad puzzling to the adult mind. Kids presumably won’t care, but at a time when bullying is such a big topic, it’s hard not to sympathise with Igor to some extent, given that his agenda has been set by critters who, despite their cutesy looks, treated him cruelly instead of compassionately.

Here’s hoping there’s a sequel where Igor settles a few scores and the Jungle Bunch realise the monster they battle is of their own creation.