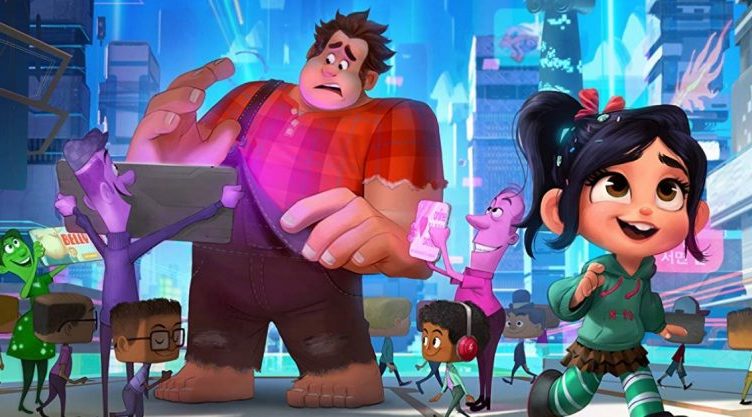 As much fun as Wreck It Ralph was it actually pales in comparison to the sequel, which is such a vibrant, funny, inventive, surprise-filled adventure it reminds you that Hollywood can occasionally get follow-ups right.

Featuring some lovely doses of satire, including a golden sequence involving the Disney Princesses – how did they get away with it? – we follow Ralph (John C Reilly) and Vanellope (Sarah Silverman) as they break free of the games arcade and enter the strange and crazy world of the internet, the visualisation of which borders on brilliance.

Propelling the film is Vanellope’s desire to find something more to life than her car-racing game. This clashes with Ralph’s belief that she should be as content as he is.

It’s a meaty conflict that pushes each character along some pretty bumpy learning curves and tests the bonds of their friendship. En route to a hopeful resolution we get to experience the internet from the inside, as if it were a metropolis with gleaming concourses, majestic buildings and seedy back streets, all pulsating with promise and foreboding.

Directors Phil Johnson and Rich Moore, who gave us Ralph and Zootopia, hit every nail on the head here, as snappy references to internet memes, ASMR videos, Bob Ross, GTA, pop up ads, auto complete and a score of other internet features garnish Ralph’s journey.

Disney films rarely get the credit they deserve for balancing compassion and tradition with progressive ideas. For instance, Disney animation was promoting “diversity” long before it became the thing it is now and have often confronted its loveable characters with challenging, life-changing scenarios.

So while the finale of Ralph Breaks the Internet might surprise some with its maturity, it actually holds true to an honourable Disney tradition, which is to provide audiences with something meaningful and homespun while being thoroughly entertaining.

Looking and sounding more haggard and cynical than she ever did in any of her comedies, Melissa McCarthy puts in her best big-screen performance yet in Marielle Heller’s fact-based dramedy about literary failure and forgery.

Based on the titular autobiography and set in the early 1990s, McCarthy plays Lee Israel, a once-successful writer of biographies who, through great fault of her own, now sits at the bottom of New York’s literary pecking order.

Even her agent (played by the great veteran comedian Jane Curtain) can’t stand her as she tries telling Israel how her abrasive personality, excessive drinking and short temper have alienated her from everyone who matters.

While going through her belongings looking for things to sell, Israel comes across a personal letter from vintage actress Fanny Brice. Selling this triggers an elaborate scheme to forge letters from famous authors.

She sets up a dark cottage industry with fellow barfly Jack Hock (superbly played by Richard E Grant as an older version of the character he played in Withnail and I) and begins an adventure that she regards as being more creative than criminal.

With Israel’s studied imitations of famous scribes pulling the wool over everyone’s eyes, Israel ironically begins feeling like a writer for the first time in a long while. It’s a really well-handled character point.

Also, the film subtly reveals how the certificates of authenticity that would be demanded and examined today for such items were regarded far more casually back then.

The character of Israel certainly plays to McCarthy’s strengths, her swearing and anti-social behaviour usually deployed for laughs here serving as symptoms of desperation and depression.

It’s a moving, compelling portrait of a person pushed to improve their dwindling prospects in a world that shows them nothing but hostility. And while Israel’s deceptions are shown to be undoubtedly clever, it’s not admiration but sympathy we feel for this lonely wretch.

McCarthy and director Marielle Heller, who made the excellent 2015 comedy The Diary of a Teenage Girl, have fashioned a gem of a film around a person who was anything but a gem of a person. One can feel the Oscars beckon.

Star Wars on Wheels. That’s essentially what you get with this highly derivative post-apocalyptic epic from the House of Peter Jackson (Lord of the Rings, King Kong, etc).

At some indeterminate time in the far future, cities have been rebuilt on giant tracks so they can move about the landscape, the bigger ones chomping up the smaller ones in an evolutionary process known laughably as “municipal Darwinism”.

Good old London town is one of the most feared predators lumbering around the European landscape as its captain, Thaddeus Valentine (Hugo Weaving), secretly develops a weapon of mass destruction capable of reducing very large things to very small things. (Sound familiar at all?)

Wanting him dead is Hester Shaw (Hera Hilmar), but she soon finds herself on the ground with Tom (Robert Sheehan), a London historian. He learns about the “anti-tractionist” resistance and the compelling reason why Hester wants Thaddeus dead.

Mortal Engines is never dull, to be sure, but for all the claims that the film has visuals you’ve never seen before there is, it must be said, a sense of sameness to it all.

Yes, the scale is extraordinary and the visuals do give all the moving cities, whether on the ground or floating in the clouds, that gleam of photo-realism.

But you know what? Big things on wheels ain’t nothing new.

We’ve had the giant Jawas transport from Star Wars, the tree chopper in Avatar, the monster machines from The Thunderbirds. Even Monty Python fans will have trouble watching Mortal Engines without thinking of The Meaning of Life and Terry Gilliam’s brilliant short film The Crimson Permanent Assurance, which features a building traversing a post-apocalyptic wasteland (though with sails, not wheels).

Speaking of which, the post-apocalyptic environment of Mortal Engines is loaded with visual cues from other films, from Mad Max to Waterworld to The Road to Terminator. The only genuinely interesting piece of design work is seen in the deep trenches left by the tracks of the city leviathans.

As for the story itself, all the narrative strands quickly coalesce into a retelling of Star Wars. Put bluntly, we’ve already had five films featuring the threat of a giant technological terror (apologies, Lord Vader) with a death beam that can inflict massive destruction. We didn’t need another.

Really, couldn’t they have thought of something else?

Yet while it’s easy for critics to sit back and mouth off at a film, your humble reviewer has always subscribed to the belief that if you’ve got something critical to say about a film, say it to the people who made it and see what they say. Otherwise, clam up.

So please check out the interviews with director Christian Rivers and actors Jihae and Leila George over on the interview page.

It is a truly blessed event when a filmmaker bring incongruous genres together and the enterprise goes “click” rather than “crash”.

Australian director Julius Avery, in his first Hollywood studio film, blends war movie with zombie horror to create a big, fun, action-splattered hybrid film that proposes how the Nazis were working on reanimating dead soldiers during the D-Day invasion. Think of it as Saving Private Ryan of the Living Dead.

Mounted on what appears to be a very generous budget, Avery kicks things off with a massively impressive aerial combat sequence and gets his squad of soldiers onto the ground and into the thick of it quick smart.

Things might take a little too long to get into the meat of the story, but once they do Avery is eager to keep the pace up, lest you start thinking too much about how whacky these shenanigans are.

With the Nazis up to no good and apologies to the squeamish, Avery mounts some eye-popping single shot sequences, and when the violence hits he really dials things up to 11.

Check out the lively interview with director Julius Avery and actor Pilou Asbaek on the interview page.