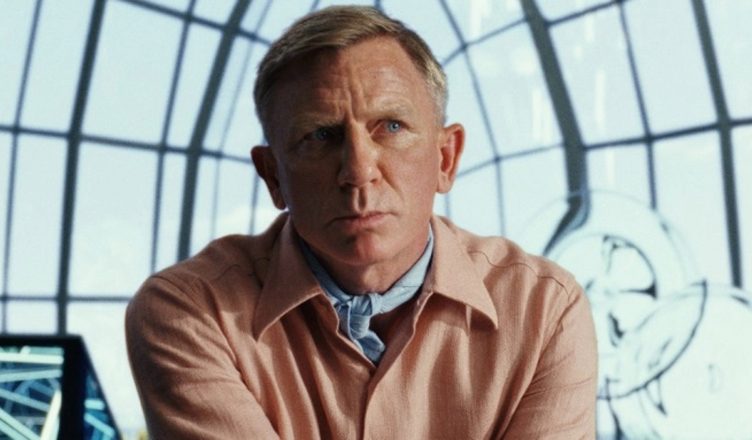 GLASS ONION – A KNIVES OUT MYSTERY *** (139 minutes) M
With his Southern twang now finely tweaked so he sounds more like a character rather than a caricature, Daniel Craig returns as workaholic, mystery-loving Detective Benoit Blanc in Glass Onion a nifty, if lengthy, stand-alone sequel to the 2019 comedy hit Knives Out.

Set at the height of Covid, Blanc is part of the exclusive guest list of billionaire Miles Bron (Edward Norton) who is hosting a murder-mystery game for his closest pals and business associates at his magnificently designed mansion on his private island.

After a lot of preliminary scene-setting where much foreshadowing is done things, of course, go screwy in a manner that is fun and sufficiently engaging to justify the film’s length. Also, the location is very attractive.

With the clear aim of setting up a franchise, returning writer/director Rian Johnson (The Last Jedi) generally sticks with genre tradition by making blanc our guide through the shenanigans.

As is convention, the detective delivers most of the exposition and takes us behind most of the film’s clever plot twists by using the age-old device of recounting a series of established events from a revealing new perspective.

But as fun as the film is, should you see a Netflix film at the cinema?

Glass Onion is the latest example of a pre-stream release – that is, a film with an impending, locked-in streaming date that is getting a brief run in cinemas, presumably to heighten publicity, get some grab quotes from reviews and maybe make a few bucks, which it surely will as fans flock to it across opening weekend.

So, ladies and gentlemen: should you pay $20 (or so) to see a film that will be freely available on Netflix on 23 December?

Obviously for huge Knives Out fans that’s not an issue. And the film does look terrific on the big screen, with all that sunlight, all those beautifully designed interiors and the radiant costuming.

If you’re less than a fan and a Netflix subscriber, however, you might want to consider resisting the urge to rush out to Glass Onion and wait those few precious weeks for it to come to you at home where you can watch it as many times as you like, pausing for coffee breaks and loo visits.

This is the choice filmgoers are increasingly being faced with as they balance the cherished “cinema experience” – over which they have limited control – or the home experience, over which control can be total and comparably immersive, especially if you have a big screen.

THE MENU ** (107 minutes) MA
A roster of exclusive guests at a super-exclusive eatery located on a remote island – a favourite spot to set movies right now, it seems – get more than a high-class meal in The Menu, a misfired black comedy that bites off much more than it can comfortably chew.

Hyper-famous chef Julian Slowik (Ralph Fiennes) is their taciturn host, but along with a progression of over-conceptualised dishes that have the guests wondering if the soiree is a put-on, Slowik serves up some of his guests’ secrets.

What begins as a pungent social satire runs out of puff at around the half-way point as one customer (Anya Taylor-Joy) tries disrupting the proceedings as the stakes suddenly rise. Writer/director Mary Mylod – whose considerable body of work includes big stints on Entourage, Succession, Game of Thrones and Shameless – can’t seem to keep focus on a central, cohesive concept that seems both over-stuffed and half-baked.

What we end up with is an affair that is indulgent and pretentious, much like the culinary culture it strives to spoof.

Still, you’ve got to hand it to Fiennes, whose performance deserved to be the centrepiece of a much better film.

STRANGE WORLD *1/2 (102 minutes) PG
After Lightyear and Pinocchio, Strange World lands with a thud as the third sub-standard animated Disney family film in rapid succession. Lovers of The Mouse House – and all it stands for – might well ask: what is going on? Is Disney running low on pixie dust?

The tiresome, slow-moving adventure involves the inhabitants of an isolated village surrounded by an impenetrable ring of mountains.

Their source of power is a miraculous plant discovered by Searcher Clade (voiced by Jake Gyllenhaal) while on an ill-fated expedition to cross the mountains, a trek from which his legendary father Jaeger (Dennis Quaid) never returned.

With the village’s power under threat, Searcher must lead a team of citizens on a very dreary, unexciting trek through a subterranean landscape, the so-called “strange world” of the title.

In a word, the journey is boring. Lots of pretty visuals, far too little action and almost no character tension. Claims that Strange World pays homage to such classics as King Kong and Journey to the Centre of the Earth ring hollow.

There’s nothing all that strange about this world, which appears to have been conceived 10 minutes before quitting time on a Friday afternoon.

Full of squids and blobs, it’s like a bargain-basement version of Avatar’s Pandora, complete with floating mountains and flying critters that resemble James Cameron’s winged dragons.

Didn’t we see gelatinous lifeforms in Monsters vs Aliens, The Thing, Ghostbusters, Alien(s) and, of course, The Blob? (We really should include honourable mention of the giant breast from Woody Allen’s Everything You Always Wanted to Know About Sex.)

Could they really not have thought up something original that wasn’t so, well, well-referenced?

And why is the animation so average? Apart from all the blobbiness, the character faces are all minor variations on the bland, generic pancake visages we’ve been seeing since Toy Story.

Like Lightyear, the actual plot of Strange World doesn’t hold up to even cursory scrutiny, so those adults trying to pay attention while their kids drift off to sleep might find the film’s weak storytelling a tad frustrating.

On top of all this, Disney might be in for some pushback from parents over the gay teen romance featured in Strange World involving Searcher’s son Ethan (Jaboukie Young-White), who has feelings for a friend.

After all, they’ve brought their kids to see a family film. Parents are entitled to regard talking with their kids about relationships and sexual orientation as their business. They don’t need a Disney film to start the conversation for them.

And though Ethan might be mid-teens, the film is clearly targeted at much younger viewers who, dare one say, might not yet be in the headspace to deal with such a mature-age issue.

It’s not that gay themes don’t have a place in Disney films. Jungle Cruise demonstrated that admirably and in a manner that felt perfectly natural to the narrative.

But Disney needs to balance its commitment to diversity and screen representation with common sense.

If the studio has the appetite to deal with the theme of teen sexuality through mass-market films, the resources are there to do it properly, from the ground up.

There’s no need to awkwardly shoehorn it in to a family film, especially one such as Strange World, which has enough issues with its wonky story as it is.

SPLICE HERE: A PROJECTED ODYSSEY *** (117 minutes) E (Exempt from classification)
Though it seems designed especially for old-school cineastes, Rob Murphy has put together a loving, lengthy tribute to the culture of movie projectionists that has been all-but-obliterated by the onslaught of digital.

Careful not to over-play the nostalgia card, he acknowledges the power and convenience of digital, championed by many, including George Lucas (quoted via anecdote), as the way to go. Indeed, Murphy openly says how he couldn’t have made his documentary on film.

Still, there’s a rich legacy for him to deep dive into, which he does exhaustively over many years and with palpable passion.

His expansive survey of the defiant remnants of the projection community takes him to derelict rural movie houses where giant projects stand like forgotten totems. He talks with old-school lovers of film in Britain and the US, including special effects titan Douglas Trumball (who sadly passed on in February, age 79).

The journey is all built around the troublesome, labour-intensive preparation for the 70mm screening of Quentin Tarantino’s The Hateful Eight at the Sun Theatre in Yarraville, an event Tarantino attended with great enthusiasm.

The more technically detailed segments might feel esoteric to some, but as a leisurely paced feature-length doco driven by devotion Splice Here is an engaging, often humourous, always loving salute to an era of film making and film presentation that, while fading, refuses to fade out.

Screening at select venues including (in Vic): The Sun, The Classic, The Astor, The Nova, The Lido and the Thornbury Picture House. See here for a complete list.

For an interview with Rob Murphy, please go here.