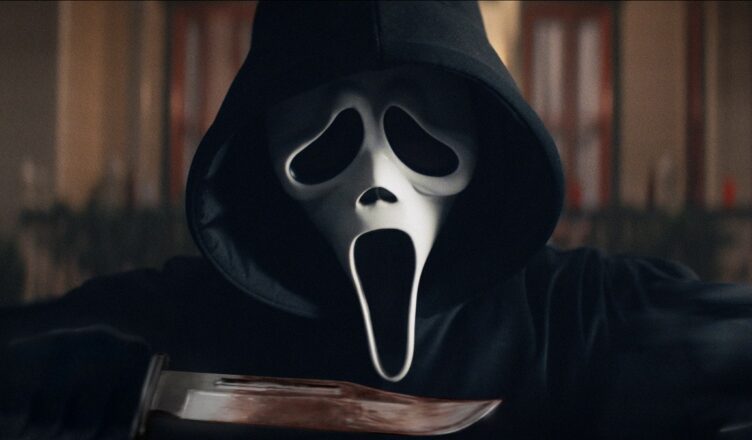 Back to bore: Ghostface returns in the fifth ‘Scream’ movie.

SCREAM * (114 minutes) MA
Way back in 1996 when the first Scream movie came out – wow, that’s 26 years ago – the idea of films and TV shows referring to themselves had quite a bit of currency.

This imbued the new Scream horror franchise with a bit of pizazz, thanks chiefly to Scream writer Kevin Williamson who, two years later, would gift us with the self-referencing smash-hit TV show Dawson’s Creek.

At that time we were also in the middle of the Seinfeld sitcom phenomenon, which pushed the art of meta-referencing to new extremes, pushed again by the show’s co-creator Larry David in his ultra-meta comedy series Curb Your Enthusiasm.

The director of the first Scream Wes Craven, who sadly passed in 2015, also hit a peak with the meta form two years earlier with Wes Craven’s New Nightmare.

So the novelty of self-referencing has long since waned, requiring skill and wit to justify its presence, as we’ve seen with Curb.

There’s no skill or wit in evidence anywhere in the fifth chapter in the Scream series, a dire slasher film that provides yet another painful example of meta done badly.

Replicating with remarkable exactitude the travesty of Matrix Resurrections, the new Scream film continually winks at the audience about how self-aware it is about crappy, cash-in sequels that serve up to loyal fans of the franchise a thin, lazy version of what came before – then does exactly that.

It’d be forgivable if there were a decent amount of scares in Scream 5 – or, indeed, any scares at all – but the film is exactly the kind of boring, repetitious, predictable slasher sequel it promises it won’t be. It constantly gags about the clichés of the slasher genre but fails to rise above them or offer anything original or fun.

The story continues the timeline of the franchise. Set again in the fictitious town of Woodsboro Ghostface – the dagger-wielding masked figure in the black cloak – is back on killing spree working its way through the young cast.

Tapping into the town’s history of horror, Sam Carpenter (Melissa Barrera) investigates the attack on her sister by Ghostface, who in this incarnation is very tech savvy about phone cloning and bypassing security systems.

Possible motives are examined, accusations fly about as the cast pile on the meta movie references to what happened in earlier films, repeating scenes and dialogue with, it’s got to be said, a pretty ordinary performance standard.

For crying out loud and for all its clever-clever meta-BS about genre tropes, we still get a host of sub-standard slasher scenes here: streets are conveniently empty of people when Ghostface strikes; the ubiquity of security camera suddenly evaporate; at one point our villain even appears to acquire super powers. It’s gunk. Very F-grade.

Members from the original film’s cast pop up to reprise their characters. There’s David Arquette, Neve Campbell and Courteney Cox, who is difficult to recognize.

Indeed, it’s telling how, given all the film’s supposed self-aware snarkiness nobody dares make any remark about how different Courteney Cox looks after all that rejuvenating facework, and how her mouth looks as though it has been attacked by bees.