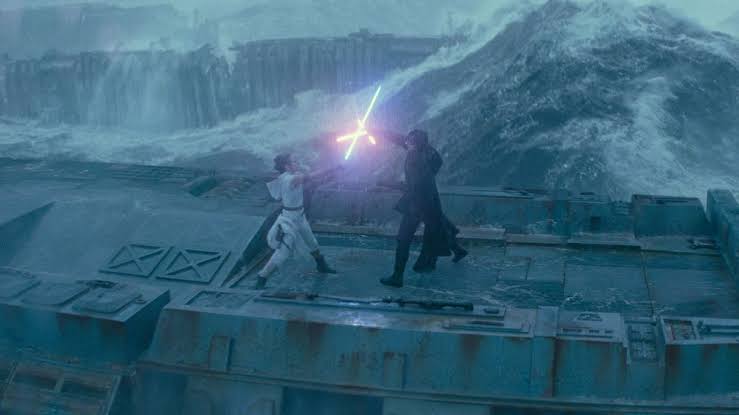 STAR WARS: THE RISE OF SKYWALKER ****1/2 (142 minutes) M
Whatever quibbles one may have over the erratic quality and lapses in storytelling logic of the Star Wars saga it’s something of a relief that The Force is strong indeed with this final chapter of the triple trilogy.

Directed again by JJ Abrams, who dutifully helmed 2015’s The Force Awakens (the first of the final trilogy), The Rise of Skywalker delivers on all fronts, combining eye-boggling visuals with a meaty central storyline loaded with a series of resounding emotional thunder bolts. It’s quite a ride.

Sporting a slightly more streamlined narrative than 2017’s superbly entertaining The Last Jedi (written and directed by Rian Johnson), the core of the story involves the concerted attempt by Supreme Leader of the First Order Kylo Ren (Adam Driver) to seduce Jedi-in-training Rey (Daisy Ridley) to The Dark Side.

Parallel to this we’ve got the desperate search by The Resistance for the new battle fleet of the evil First Order, which is cleverly hiding in a shady quadrant of the galaxy known only in legend.

Each of these familiar-looking star destroyers is armed with a cannon that can crack open a planet like an over-ripe coconut, so the heroic team of Rey, Poe (Oscar Isaac), Finn (John Boyega), Chewbacca (Joonas Suotamo), C-3PO (Anthony Daniels) and B-88 (the rolling droid) follow a trail of leads that involve a lot of chasing, shooting, exploding and story exposition that even the most focused of fans might have trouble following.

The journey is hot-wired with a quality assortment of revelations, twists and surprises as Kylo telepathically tortures Rey, who suffers from traumatic flashbacks from the time she became an orphan.

This is where the real juice of the story is and what lifts the film above the fray of most franchise tentpoles.

To his credit, Abrams has learnt the big lesson from 1980’s The Empire Strikes Back – still the best film of the franchise – that it’s possible with the chugging locomotive of a big bubblegum film to blow a whistle, stop everything and allow a poignant dramatic moment to sear into the minds of the audience.

He pulls this off several times during the film, often deploying close-ups Sergio Leone would have been proud of. It’s quite an achievement in a film with so much going on.

Visually, the film is a knockout. Given how almost every major film these days has an army of digital artists and a VFX budget in the tens of millions, it’s remarkable how this film continues the Star Wars tradition of conjuring visions that are genuinely ground-breaking.

The extensive use of real world locations, for instance, enhance the photo-realism of other-worldly vehicles and spaceships as they skim, bounce and crash across the landscape. Particularly impressive is Abrams’ use of focus and shallow depth of field.

In terms of sheer scale, the film’s most awesome highlight involves Rey’s visit to a gigantic technological wreck that sits in an angry ocean as massive waves break upon its creaking structure. Looking like the skeleton of a fallen Death Star it’s a strangely beautiful, Gothic sequence that hits a wow factor of 11.

It’s a cliche borne of the standard-setting work by Industrial Light & Magic – the effects outfit created by Star Wars maestro George Lucas (who has had nothing to do with the franchise since selling it to Disney back in 2012) – but it remains true that so much of the digital FX work looks so real, even though we know it can’t be real. Shots of massive star destroyers showing their intricate design and detail are especially intimidating, while tiny robots beep and squeak with personality.

Now, this being a Star Wars movie there are, of course, a host of glaring inconsistencies and clumsy plot holes. These have become such an intrinsic part of the Star Wars canon one wonders if they have become mandatory.

For instance, it’s a pity that we have reached the end of the Star Wars trail without once, in nine films, ever encountering a stormtrooper who can shoot straight. The dolts running about here are like bowling pins on legs, falling dead with a single laser blast from our heroes. This begs the question: what good does all that shiny white armour do?

Even more annoying, though, is that we once again have a scenario where the bad guys just can’t get their act together, defense-wise.

On the one hand they are capable of designing, building and deploying these incredible weapons of mass destruction.

Yet somewhere there is always a fatal design flaw in their planning that will allow a ragtag squadron of small rebel fighters to bring down the whole apparatus. Really, 1983’s Return of the Jedi should have been the last time we saw that cliche, yet here it is again 42 years after being introduced in the original Star Wars. It’s proved a real story-telling stain on the Star Wars legacy. It’s a basic rule: if you make things too easy for the good guys their victory over evil is sapped of any real tension.

Still, the pace, dazzle and emotional gravity of Rise of Skywalker earns enough credit to make you forgive these lapses. After all, it is Christmas, a time of forgiveness.

For big fans of the films there’s a large array of classic references to feast on, not the least being the use of old rebel fighters and the pedigree of Rey’s light sabres, which becomes a major, moving story point.

And while there is rapid cutting and crash zooms in some of the action (though much less than in the previous two films), the cinematography by Dan Mindel (Force Awakens; Star Trek) brandishes a strong sense of composition inspired by the original trilogy.

Tying off the saga with what feels like a parting gift to the audience, the film ends with a final image that should put a lump in the throat of anyone who was struck by that fleeting shot in the first Star Wars of the double sunset on Tatooine as Luke looked out at the horizon wondering what the future had in store for him.