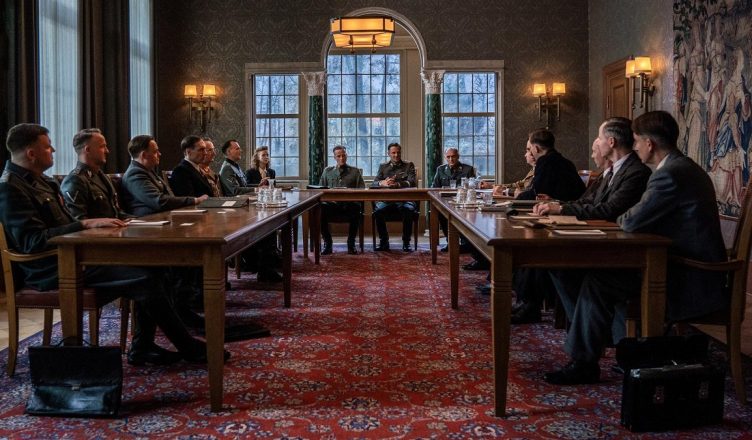 Ghastly meeting: Nazis work out the details of the Final Solution” in ‘The Conference’.

THE CONFERENCE ***1/2 (107 minutes; subtitled) M
For all the barbarity and horror unleashed by the Nazis during the Holocaust, it was at a sedate meeting on 20 January 1942 in the tranquil setting of Wannsee, Berlin where a new order of inhumanity was conceived.

Directed with cool detachment by Matti Geschonneck, The Conference offers a stark, unsettling dramatization of how Hitler’s high command gathered to calmly work out how best to eradicate the Jewish population their conquest of Europe had put under their control.

The understated tone of the discussion, which includes jokes and coffee breaks, effectively counterpoints the monstrous nature of what they are planning. The sheer scale of the task hangs heavily in the air as officers and bureaucrats bicker over who should do what, by when and how.

All the negotiating, deal-making and chatter – there’s a lot of it so keep up with the subtitles – often makes The Conference feel like a macabre business movie – which, essentially, it is, only the product being discussed is industrial-scale mass-murder.

Concerns are raised about logistics, rail capacity, transport schedules and how the psychological damage suffered by German soldiers ordered to shoot innocent people could be offset by liberal supplies of Schnapps.

Especially chilling of all are the earnest exchanges about the most efficient and economical way to carry out the slaughter.

Probably the most distressing scene in the film sees a cold calculation about the expense and time involved in shooting so many people, using the massacre at Babi Yar in Ukraine as a template. One method designed to move people from train carriages directly into the gas chambers, thus saving costs on housing and bullets, prompts one officer to applaud.

Underlying all the conversation about the mammoth operation is the conviction that what they are doing is an unpleasant but necessary step towards a greater glory, all driven by the unquestioned, oft-repeated belief that they are serving destiny. Thus, there’s no point wasting sympathy on people who are already doomed.

There have been some good films about the Wannsee meeting, the most prominent being 2001’s Conspiracy, which earned awards for Kenneth Branagh (an Emmy) and Stanley Tucci (a Golden Globe).

The Conference is easily its equal, the main difference being the emphasis on the brutal bureaucracy behind the Holocaust and the ghastly vision that drove it.

THE PRINCESS ***1/2 (109 minutes) M
Compiled solely through archival footage and photos The Princess delivers a captivating, long-form, narration-free take on the public and private life of Princess Diana, from her timid romance to her shock death in a Paris car crash in 1997, and beyond.

Splendidly edited with the pace of a thriller, director Ed Perkins sprinkles subtle suggestions as to why her mystique endures, happily side-stepping any pretense to objectivity by editorializing on a range of important matters regarding Diana’s ill-fated marriage to Prince Charles, her personal demons (Bulimia; depression) and how her enormous popularity, fuelled by her savvy manipulation of the media, put her on the wrong side of the royal family.

It’s an engrossing, admittedly partisan profile that sheds light on her treatment by the media, her psychological struggles and the circumstances of her untimely death.

Fans will obviously eat this up, but it’s not all adulation with the sensible, if brief, inclusion of the late social commentator Christopher Hitchens publicly airing his now-famous disdain for Diana in the middle of people who were collectively grieving.

EVERYBODY’S OMA ***1/2 (93 minutes) M
What starts out as a rosy, cute look at an elderly mother living with her son’s family gradually gives way to a thorny, often confronting study of the perils of living with an increasingly frail person afflicted with dementia, and the corrosive effect their constant demands for attention and care can have on family life.

Filmmaker Jason van Genderen had long been documenting his beloved mother Oma, posting short films online as a bit of fun. When the Covid lockdowns hit his NSW Central Coast home he kept the practice up, with one skit involving Oma shopping at a pretend Coles his family had created in their home becoming a viral hit.

But as Oma’s condition deteriorated he kept the cameras rolling, his admirable devotion to his mother requiring huge sacrifices, involving the shuttering of his successful video production business, continual video surveillance of her and the support of Megan, his sturdy, increasingly stressed-out wife.

The degree of self-scrutiny on show here is often startling, with van Genderen adopting an approach so honest and unflinching he sometimes looks like a bit of a prat.

Most telling is when his wife, visibly strung out and fed up with the all-consuming project Oma has become, dares to suggest reducing the pressure by getting rid of Oma’s cat. As much as he loves his mum, van Genderen’s patronizing response suggests how his priorities have become somewhat warped, especially given that they have four young children to also look after.

Love, clearly, is the glue that holds the domestic adventure of Everybody’s Oma together. Yet the film, to its great credit, is brave enough to show the frayed emotions such devotion and care for a family member can exact.

Courageously, implicitly, perhaps unintentionally, Everybody’s Oma also brings into question the value of mounting huge, emotionally exhausting, materially expensive efforts for the sake of somebody who no longer has the faculties to appreciate, or even acknowledge, the sacrifices being made for them.

Compiled from archival footage and narrated by Bowie, writer/director/producer/editor Brett Morgen mounts a noble attempt at the impossible by digging into the artist’s creative psyche to explore what made such an inspiring, hydra-headed, visionary talent tick.

Some of the rapid-fire editing montages do get a bit over-the-top, with Morgen happily taking images from Bowie’s films and music videos and splicing them into new contexts.

For all the seemingly random sampling of quips and interview clips (most of which are on YouTube), the film does construct an arc as we see Bowie’s early persona as an otherworldly, androgynous, colourfully costumed, moderately transgressive but ultimately benign pop star morph into a more sedate, almost mellow artist eager to put something positive into the world.

Of course, there is plenty left out. Bowie’s life-long love of smoking probably deserved some attention, and while we get glimpses of him and Tina Turner performing in that famous 1980s Pepsi ad, there’s no mention of Bowie’s aggressive attitude in favour of concert sponsorship.

Still, you can’t cram everything about a life so big into a mere documentary. What makes Moonage Daydream so enthralling to behold is that director Morgen has given it the good old college try.