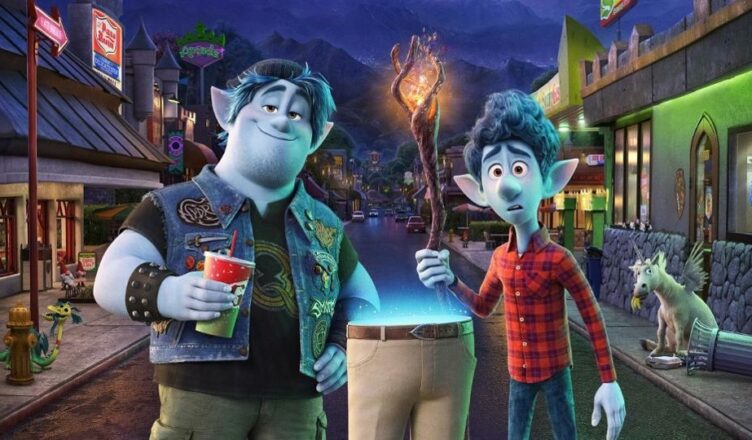 Magical mystery tour: two elfin brothers go in search of the other half of their reanimated father in Pixar’s ‘Onward’.

ONWARD **** (107 minutes) PG
We’ve sat through enough second-rate Pixar films to know how the allegedly legendary animation studio – which, with all due credit, kicked off the digital animation genre with 1995’s Toy Story – is as susceptible to creative mediocrity as anybody else.

So it comes as a heartening relief to behold Onward, a wildly imaginative, deeply enjoyable and ultimately moving tale of brotherhood that honours the defining qualities in the best of Pixar’s oeuvre.

The bizarre world created here is probably the most original since Monsters, Inc and The Incredibles.

It’s a highly recognizable suburban setting that was once a magical netherworld of goblins, elves, fairies, pixies and so forth. All those special powers and abilities that made them special have been largely abandoned in the face of whiz-band technology that has overtaken the need for magic.

Eager to reunite with their deceased father, elfin brothers Ian (Tom Holland) and Barley (Chris Pratt) use a special spell he left them that would bring him back for one whole day. They invoke the spell, but louse up the process. Their father does reappear, but only the bottom half, up to the waist.

The only remedy to their singular predicament is to locate the replacement for the magical stone they need. So into Barley’s pimped out van they go for an adventure-filled road trip, with their disapproving mother Laurel (Julia Louis-Dreyfus) in hot pursuit.

The lads have only got till the end of the day to find the stone, and director Dan Scanlon (Monsters University) crams their journey with enough mishaps, obstacles and surprises to fill a witch’s cauldron.

Onward easily stacks up as one of the most eventful and enjoyable Pixar larks thus far, full of great creations and marvelous twists on magical creatures, the most outlandishly funny being a gang of mean-minded biker fairies.

As with the better Pixar films, the dazzling, beautifully animated enterprise is driven by an emotional theme that gathers strength as the journey goes on. The relationship the boys have with their father and with each other grows in prominence leading to a memorable climax that manages to blend top-flight action with heartfelt emotion. It really is quite a feat.

In terms of present trends in cinema, it is telling that Onward is the latest major studio film in the past year that celebrates male bonding.

The others include Once Upon a Time in Hollywood and Ford v Ferrari, both of which were unadulterated bromances and massive hits ($US374m and $US225m respectively).

While we have rhetoric by the cubic ton about the role of women in modern cinema, it’ll clearly be some time before female leads can command comparable popular appeal – and how much richer cinema will be when that occurs.

It was wonderful to see Greta Gerwig’s beautiful remake of Little Women take a hefty $US302m, but we also had to sit through the torture of Charlie’s Angels and the mediocrity of The Hustle, neither of which made much impression.

As luck would have it, Onward had just begun its cinema release in March when the Coronavirus shutdown hit and it, like every other film, was pulled. It was subsequently rush released into the stream and onto disk. The obvious hope is that the audience it was denied will find the film on a scale comparable to its stablemates.

Onward is available on Disney+, Google; iTunes, YouTube and Microsoft.