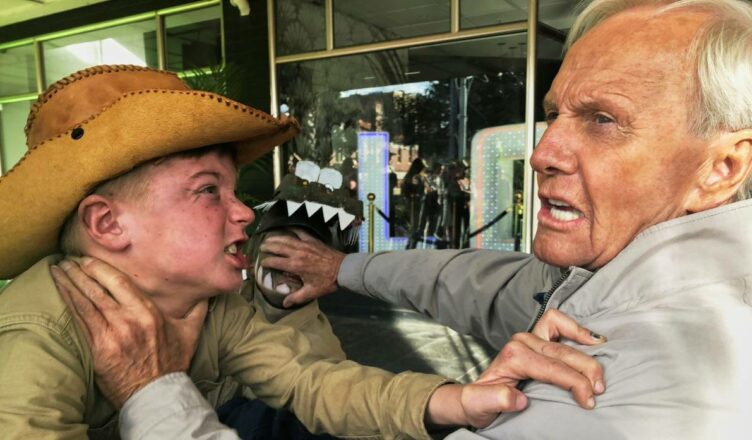 People person: Paul Hogan has an unfortunate encounter with a young fan in ‘The Very Excellent Mr Dundee’.

THE VERY EXCELLENT MR DUNDEE *** (88 minutes) M
Well, no, the latest film from Paul Hogan is not very excellent at all.

Set in Hollywood, though mostly filmed in Melbourne, the film is a knockabout meta-comedy – where real people play fictionalized versions of themselves – that follows Hogan in the lead-up to him receiving a knighthood for services to entertainment from the Queen, whose favourite Hogan film is Crocodile Dundee in Los Angeles.

Widely seen as a has-been with a dead film career, Hogan’s harried manager Angie (Rachael Carpani) tries hard to improve his public persona, but the icon just can’t help putting his foot in it.

Blissfully unaware of woke values he insults black people, hits a nun, assaults a woman with a snake and is accused of assaulting children. It’s all due to accidents and honest mistakes, but an unkind media gleefully misreport every misstep, hammering home what a desperate, hollowed-out, cynical, racist and singularly sorry excuse for a human being he is.

Alone in his big house, with the world against him and his reputation repeatedly shredded on TV the only solace Hoges has is his grand-daughter back in Melbourne who phones him regularly.

The film is a jumble of poor acting, clumsy plotting and weak production values.

The direction by Dean Murphy, whose long-time collaboration with Hogan includes the hit comedies Strange Bedfellows (2004) and Charlie & Boots (2009), is stiff and clunky.

The film looks terrible. The photography is unadventurous, the lighting is bland as though the film had been designed for 1980s television. Some of the film’s process shots – where actors perform against a blank green or blue screen that will have visuals added later – are so bad they almost look deliberately so, as if making a joke about visual effects that try to make make interior scenes look like exterior scenes.

Then there’s the laughable attempt to make Melbourne look like Los Angeles. The location shots in LA spliced into the footage shot in Melbourne just do not blend together – the lighting! the lighting! – and, in one truly embarrassing scene, we have the skyline of Melbourne used as the background for a scene set in Hollywood.

Add to all this the cacophonous blaring of what sounds like syrupy elevator muzak over much of the film. Was the film accidentally released with the temp track?

With gaffes coming out of its ears, The Very Excellent Mr Dundee is clearly a mess.

Yet, despite everything you can fault the film for, the stupid thing is funny.

Hoges, now 80, might move through the movie like an early-Star Wars robot but he still knows how to deliver a punchline and engineer a visual gag. Being the straight man has never been Hogan’s forte, but he makes a good fist of it here as the blind-sided everyman icon in a hostile world.

The film boasts a long list of chuckle-worthy cameos including Chevy Chase (who is absolute gold in this), John Cleese (as an Uber driver discussing his financial woes), Wayne Knight (Newman from Seinfeld), Shane Jacobson (as an unauthorized Dundee impersonator), Jim Jeffries (the Aussie comic big in the US), Luke Hemsworth (Westworld; brother of Chris) and young actress Jessica Gower, who gets away with the film’s funniest roasting of Hoges.

Olivia Newton-John also stars in the film as a stalwart friend who invites Hogan to a Grease-themed benefit. Bearing that signature smile, she is a pleasant presence though, to be honest, her acting chops don’t seem to have developed all that much since Two of a Kind. No disrespect.

Written by director Murphy and Robert Mond, the film serves up a well-planted, if soft, backhander to woke culture and sensationalist media.

It all kicks off nicely with a neatly etched, if stiffly performed, meeting with studio heads pitch who pitch to Hoges the concept for a new Crocodile Dundee film in which Will Smith plays his son. Everyone is blind to the obvious problem of colour-blind casting except Hogan, who eventually does the wrong thing by speaking up. The media reaction is predictably volcanic and inaccurate, which dovetails into a very amusing subsequent encounter that inflames his reputation as a racist.

These swipes are a bit of justified payback for Hogan, though given how deeply he resents the press for having treated him so badly over the decades the jabs are surprisingly light and fall well short of full-on satire, which would have been cool to see.

Hogan has always put his fans before any delusions about the importance of wealth and fame, a value reinforced by the playful referencing of Hogan’s chequered career and the jokes spoofing the dubious legacy of Crocodile Dundee, including a very clever musical parody of the famous “that’s not a knife” scene.

Apart from providing a decent flow of laughs the point of the film, it seems, is how all these years later he’s still the same old Hoges – cheeky, self-effacing and always ready to poke fun at everything, especially himself.

The film’s finale stresses the importance to him of family and friendship. It’s heavy-handed and corny as hell, yet it still works. Seems that Hogan’s common-man sparkle can still shine through anything.

Footnote: While the film churns through a lot of detail about his career no mention is made of Almost an Angel, Hogan’s “lost” 1990 comedy about a man who thinks he is a celestial being. It was disaster upon release but it’s a pretty good film. Check it out on YouTube.