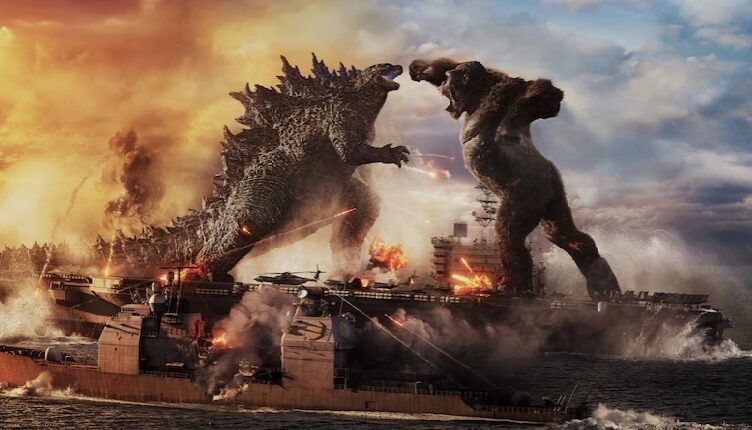 Game on: Godzilla fights Kong in ‘Godzilla vs Kong’.

Godzilla vs Kong *** (113 minutes) M
Seriously, the only important thing you need to know about the latest over-produced, totally disposable reptilian wrestling match is that it takes a whopping 40 minutes before lizard and ape get it on.

Once the punches finally start flying the film makes for a fairly reasonable, eminently disposable time-killing boom-crash spectacle as Kong – the human-friendly giant ape – and Godzilla – the large, overweight walking lizard – see how much collateral damage they can cause while duking it out.

Despite the title, Godzilla isn’t the only beast Kong does battle with, of course. There’s a wide assortment of flying dinosaurs he encounters in his homeland, which, it turns out, isn’t the Skull Island of legend but a perfectly preserved prehistoric world that exists at the hollow core of the earth.

They’re in search of a mysterious power source that will help quell the rampaging Godzilla, who has unaccountably gone rogue, causing all manner of havoc with the death ray that shoots out his mouth, his signature weapon of choice since coming to life in 1954’s Godzilla.

The film has some impressively nifty sequences. The initial encounter between the two stars takes place at sea and destroys an entire US battle fleet, including an aircraft carrier that serves briefly as a boxing platform before going under.

There’s also a fairly awesome exchange of aggression in Hong Kong where Kong and Godzilla also have to contend with the giant, Transformer-like robot-Godzilla clumsily called MechaGodzilla (Why not simply Mechzilla?). It’s a rather marvelous melee, a roaring cacophony of body slams and smashed skyscrapers that have the good taste to maintain their neon-lit beauty even as they topple.

That said, most of the VFX work in Godzilla vs Kong, for all their scale, expense and obvious artistry, is a much of a muchness.

Visually, there’s really nothing here that we haven’t seen before. Collapsing buildings. Capsized battleships. Giant fireballs. Exploding jet fighters. It’s become cinematic rote. There is a nice touch where a low-angle shot during a mega-fight shows dirt on the lens as if the camera is really there, but that’s a cute trick we saw yonks ago in Cloverfield.

When it comes to the titular critters themselves, truth is there have been so many screen iterations of Kong and Godzilla it’s hard to make them look interesting.

With Kong they’ve given him a bit of a beard, but that’s about it. Weta, the New Zealand outfit that did the visual effects for Peter Jackson’s Lord of the Rings and King Kong, is at work again here and it really looks as though they’ve reheated some old software. Couldn’t they give Kong a limp or something?

As for Godzilla, pray, he still moves as though we’re watching a guy in an over-sized rubber suit, albeit a very scaly one. And why does he still have that ungainly paunch? If he knows he’s going to be in a movie, shouldn’t he at least cut back on the linguine?

When it comes to the big battle scenes, it’s the usual jumble of swish pans and fast cuts we’ve gotten too used to.

The spectacle fills the frame with great detail work, but the editing is so fast and the camera so restless your eyes don’t get a chance to register any real sense of scale. It seems Christopher Nolan is the only director around at the moment who likes infusing an aesthetic into his action sequences.

OK, the quantity of the action in Godzilla vs Kong helps make up for its lack of originality. Still, the action in these big films need to stop looking so generic and off-the-shelf, as though the VFX were snipped off the same effects reel.

As expected, the film shows how the decline in the art of big-film storytelling ignited in the 1990s by Independence Day and the Batman films continues without relent. The film is rife with story holes, inconsistencies, loopy coincidences and characterizations so wobbly they give cardboard a bad name.

Understandably, the priorities of director Adam Wingard (Blair Witch; You’re Next) likely had more to do with orchestrating the monster mayhem than winning any awards for best screenplay or best acting.

And why so serious?

The terrific Godzilla: Final Wars (2004) openly mocked the 1998 Hollywood film and had fun with its fights. Nothing like that here.

There is some deliberately syrupy use of pop music and most of the film’s comic relief comes from a supporting character called Bernie (Brian Tyree Henry), a hyper-energetic podcaster. He’s full of beans but, unfortunately, he speaks so quickly and with such poor diction it’s a struggle to understand a single word he says.

None of this is to suggest that the film lacks depth. Indeed, Godzilla vs Kong does raise a couple of troubling questions.

In terms of what motivates Godzilla to suddenly go from “titan saviour” to bad guy, the film makes a rather dubious case for diminished responsibility, about how Godzilla was a peaceful soul just minding his own bee’s wax before being provoked into destructo-mode.

The film posits mitigating factors for the violence and wanton property damage Godzilla inflicts upon civilization; it’s the old “look what you made me do” line. Hmm. Not very sound, especially in the present era.

The other, far more troubling question the film raises is where our loyalties are supposed to lie: are we Team Godzilla or Team Kong?

The point is made at the beginning and end of the film about the Godzilla legacy, and the film exists squarely within the Zillaverse, with references to the previous Godzilla films (Godzilla; Godzilla: King of Monsters, which was actually quite good), and complete with an obligatory re-appearance by Kyle Chandler, who by now must be realising with all his Godzilla credits that he probably peaked in The Wolf of Wall Street.

Yet, the film also exists in the Kongverse with its links to Kong: Skull Island. And Kong is the sentimental favourite here with his connection to little Jia and his human-like morning routine, even though he does cause the deaths of countless thousands and, at one point, even murders a few people. (No exaggeration.)

Turns out it’s all part of the “Monsterverse” by the Legendary production studio that is making all these Hollywood monster films. The brief for the franchise is clear: equal billing and more sequels.

So, they want us on both sides, more or less, an issue director Wingard tries to straighten out in the film’s final spool. He works very hard at this and the direction is so strained it’s enough to buckle a skyscraper.

Marking what every right-thinking person would hope is the end of the Covid-induced blockbuster drought, Godzilla vs Kong deserves to be warmly embraced as a cheesy, old-style popcorn seller, with just enough punch’n’crunch spectacle to make up for its slow start, thin characters and sloppy storytelling.

The film has arguably been more anticipated that it warrants thanks to Covid anxiety, but hopefully it does signal a return to mass-market cinema treats, even though it is part of Warners questionable move to release its big numbers in the stream at the same time.

Luckily for us that’s only in the US, not here where it’s a big-screen only release. May the Movie God forever protect us from that scenario.