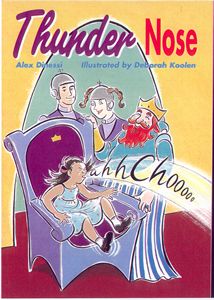 THUNDERNOSE (2000, Macmillan)
Janie has a bad case of hay fever, and she is sneezing so hard she becomes unstuck in space and time. After travelling all over the world, as well as backwards and forward in time, one big sneeze lands her on another planet in the middle of an interplanetary war, which only she can resolve. (written as Alex Dinessi)
Illustrated by Deborah Koolen.