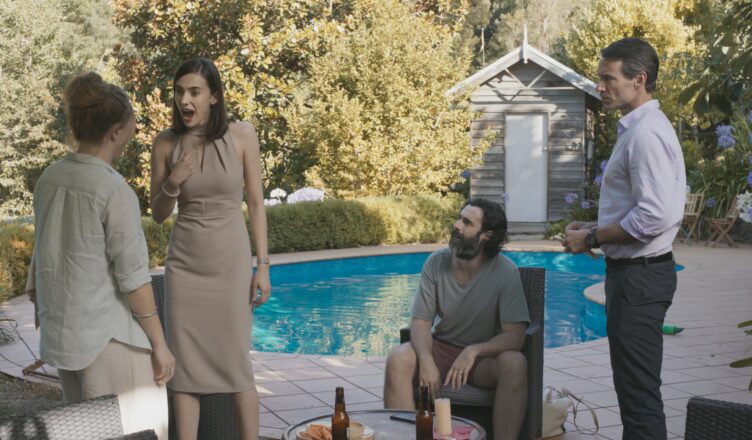 Let’s talk: Two couples are forced to deal with a nightmare situation in the Australian drama ‘Disclosure’.

Tautly sculpted into a real-time format, writer/director Michael Bentham wastes no time locking in your attention from the get-go, setting up a pressure-cooker scenario in which all the participants have high stakes, strong emotions and conflicting ideas about conflict resolution.

Their four-year old daughter has told them about an episode of sexual abuse committed – allegedly – by the son of their very close friends Joel Chalmers (Tom Wren) and his wife Bek (Geraldine Hakewill).

Joel is a conservative politician running in the local election, so news of this getting out would destroy him. For the staunch, strong-minded Bek, the allegation against her beloved son is simply not believable.

The couples meet poolside at the house for what is supposed to be a civilized discussion to talk the jagged problem through and hopefully come to an arrangement agreeable to all.

It’s with an agonizing inevitability that an initial showing of civility soon gives way to an absolute thornbush of arguments and accusations as the quartet pick over what actually happened and what is supposed to have happened.

While Emily and Bek are at war eager to protect their children, Danny and Joel face a more complex dilemma.

As long-time friends they respect and understand each other so, while defending their sides of the story, try striking a deal that will cause the least damage.

In lesser hands Disclosure could have been a pompous, prolonged shouting match replete with virtue-signalling and woke-speak. Thankfully, Bentham has fashioned a far more nuanced, insightful and captivating clashing of wills and truths.

As for having its finger on the pulse of the zeitgeist, it’s probable the film’s intelligent, even-handed, singularly dramatic canvassing of issues dealing with reputation, allegation, sexual assault and culpability are more relevant right now than they were when Bentham was tapping the film’s screenplay out on his laptop.

With a love of long takes, Bentham often allows the tension to build purely through the film’s fiery performances. All put in exceptional work, though it is Geraldine Hakewill’s portrait of a deceptively controlled woman that is the clear standout.

The film does stumble at an important moment where the plausibility of the proceedings suddenly sags. Given the authenticity of the rest of the film, it really does stick out, and at a critical time. One wonders whether some judicious editing, and a close-up or two as things hit a dramatic peak, might have improved matters.

Despite the inherent theatricality of a four-hander, cinematographer Mark Carey does a great job creating a strong, fluid sense of place as the characters move through the property and the spacious house.

The emphasis on locked camera positions not only allows the actors to let fly with some potent tussles without the interruption of editing, it automatically signals how something major is happening when the camera does move.

As a viewing experience, Disclosure is a tough, thought-provoking, acerbic look into difficult moral territory where every sound argument can be matched with an equally sound counter-argument.

Much like A Lion Returns it’s an independent film that cuts through to the heart of a conflict, never pretending for a second that resolution is easy, or even possible. 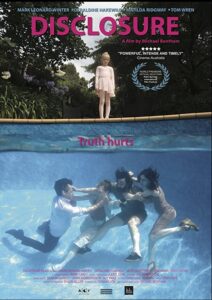 Footnote: As somebody who has long carped about the poor quality of poster art for Australian films – some have seemed to actively scare off potential patrons – the one for Disclosure is an absolute ripper: four adults having at each other underwater while a little girl looks on, with the slogan “Truth hurts”. A prime example of a poster that teases just enough to make you want to see the film. Great work. Check it out.

Disclosure is on at the Cameo until Wednesday 10 March, then at the Nova from 25 March.