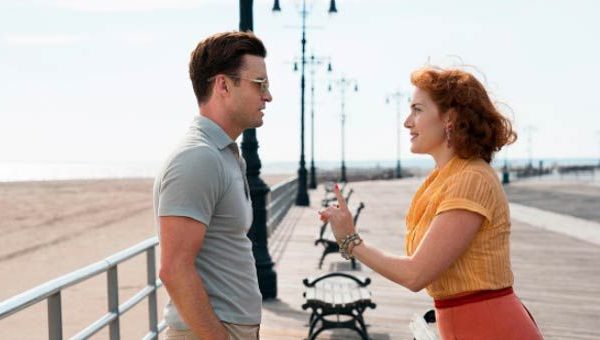 Secure, yet unhappy in a troubled marriage is Ginny (Kate Winslet), a frustrated actress biding her time as a waitress. Her husband Humpty (Jim Belushi) runs a merry-go-round and works hard to keep his temper under control.

Stress levels spike when their estranged daughter Carolina (Juno Temple) arrives in an unwelcome rush, on the run from her gangster husband who wants her dead.

Relating all this direct-to-camera and with melodramatic flourish is lifeguard Mickey (Justin Timberlake), a budding writer who is having an affair with Ginny and who relishes the complicated emotional cross-currents of life.

The real kicker here, though, are the film’s typically heart-felt performances. They attest to how Allen, at 82 and knocking out about a film a year, has an intuition for eliciting the best out of his cast, a talent matched by a scant few. (Scorsese, perhaps. Maybe Coppola and Spielberg.)

Winslet and Temple – both Brits entirely comfortable in this milieu – are terrific, but the real treat of the film is Jim Belushi. Allen proved his knack for getting unexpectedly strong performances from unexpected sources when he cast comedian Andrew Dice Clay in Blue Jasmine. Here Allen does the same with Belushi’s moving portrait of working-class decency.

Here’s a tearjerker designed to really test your stamina. Think of it as The Elephant Man for kids.

Young Auggie (Jacob Tremblay, the kid from Room) suffers from a genetic facial disfigurement that prompts him to wear a space helmet wherever he goes.

Having been home-schooled by his unconditionally loving mother (Julia Roberts) and father (Owen Wilson), Auggie faces the muted horror of leaving his protective bubble and going to school where he must mix with real kids.

Of course there is teasing and bullying, and even envy from his attention-deprived sister (Izabela Vidovic in the film’s best child performance), yet the film, as cliched as it undoubtedly is, cleverly freshens up the formula by giving us the perspective of the other kids Auggie interacts with.

Based on the kids’s novel by R.J. Palacio, director Stephen Chbosky (The Perks of Being a Wallflower) is careful to push every emotional button to heighten our sympathy for Auggie and our unfettered admiration for his courage in the face of insults about his looks.

As life-affirming, uplifting, unapologetically heartstring-tugging family fare, Wonder is difficult to fault, with its climactic message to audiences to become part of the online campaign to be more compassionate coming through loud and clear.

Yet, to be completely frank, the constant positivity and encouragement that permeates the film does result in a rather low level of conflict. This, in turn, might leave some mature viewers who like some bitter with their sweet a little hungry for more dramatic grit.

Those with strong memories will recall the excellent 1985 film Mask starring Cher, Sam Elliott, Eric Stoltz and directed by Peter Bogdanovich. Dealing with the same broad topic – as did David Lynch’s brilliant Elephant Man from 1980 – it delivered a stronger, more satisfying edge of realism.

Still, how good it is to see a positive, message-driven film for kids at a time when the default mode of behaviour being instilled into them by TV and online culture is to be as nasty as possible.

Sneaking into cinemas without any fanfare and destined for a blink-and-it’s-gone run is this fine, lush-looking, understated 2016 wartime drama from veteran Jim Sheridan (The Boxer; In the Name of the Father; My Left Foot).

On the verge of being shifted out of the Irish mental hospital where she’s been happily ensconsed for 40 years, Rose McNulty (Vanessa Redgrave) digs her heels in and begins bending the ear of her shrink (Eric Bana, in fine, accented form), telling him about her life during the war and the romantic ties she had with the local village priest (a very good Theo James, unrecognisable here as the stud from the Divergent films) and a British Spitfire pilot (Jack Reynor).

The younger Rose is played by a radiant Rooney Mara (Carol; Lion; Girl with the Dragon Tattoo) who fits perfectly in this unhurried tale that hides its sudden turns very well indeed. The film is based on the acclaimed, award-winning 2008 book by Sebastian Barry.