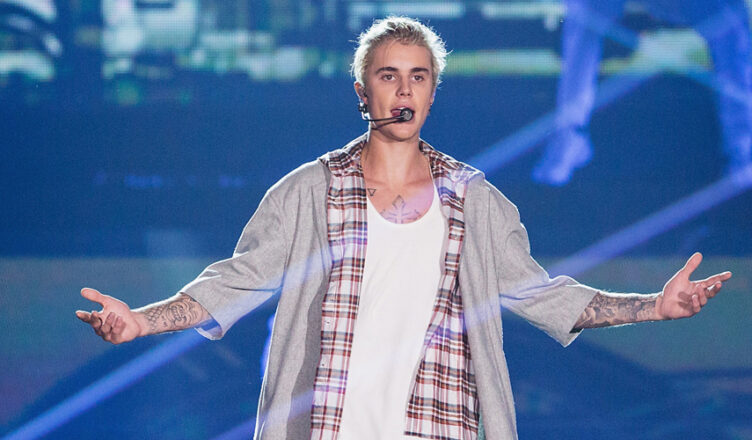 Oh, baby: The pop megastar delivers for fans in ‘Justin Bieber: Our World’.

Deep in our hearts we are all Beliebers.

Even if you’re not part of Justin Bieber’s scientifically calculated, precisely defined target demographic – that’d be females aged between 7 and 49 – it’s hard not to respect his talent, dedication to fans and sheer stamina.

Having hit the spotlight at 13 the guy is now 27, that cursed age many a troubled pop icon couldn’t beat. Given the trauma Bieber has been through – drugs, depression, dealing with the media – we should be glad he’s still with us.

Director Michael D Ratner, a long-time collaborator, has done a superb job finessing a slick, entertaining fan film from a mountain of footage from dozens of cameras capturing a multitude of viewpoints, including a vlog from Bieber.

Blending dazzling, sharply edited concert footage with behind-the-scenes coverage counting down to the show, the film is packed with insights about the logistics, headaches and precision involved in staging a worldwide event in the era of Covid.

Eager to get back to performing after a three-year, virus-induced hiatus, Bieber and his team devised an ingenious, industrial-sized, Covid-safe way to give Bieber’s global population of screaming fans a unique experience by live streaming a huge soiree from the roof of the Beverly Hills Hotel on New Year’s Eve, 2020.

Playing before a select crowd in front of the stage and occupying the hotel room balconies arcing around the giant performance space, the show itself is a seamless blend of energy and effects, some of which defy explanation.

At one point three giant crucifixes – Bieber is a believer, God bless him – appear in the sky and morph in the initials JB. It’s impressive as all heck. No idea how they did that. Wish they did.

And the editing is great, often cutting between the stage, rehearsals and fans on balconies singing along, mugging at the camera and waving their light wands.

As for taking Covid seriously, there’s no anti-vax BS with Bieber, with the film often taking on the appearance of a PSA. We watch as everybody on the crew gets thoroughly tested each morning, with all strictures strictly observed. At one point a key member of the dance troupe comes back with a positive test, so into 14 days of isolaton he goes, taking part in rehearsals via video before he’s allowed to return.

With Bieber providing a first-person vlog, we see him make good on his commitment to his art.

Never mind the cute kid with the hair helmet from 2013’s Never Say Never, the Bieber we get here is a commander overseeing every intricate detail of his show. No wonder he goes a bit troppo when last-minute technical snags delay the strict 8pm start time by 45 minutes. Bad news, especially when working to a 10pm curfew.

We also see a much more settled, more mature Bieber. He’s married, planning a family, at peace with himself and self-reflective, having taken ownership of his many misdeeds, which he addresses through song.

Given Bieber’s rough time coping with fame and the rancid side of celebrity, the film presents to fans, admirers and the curious the Justin Bieber we want to see at this point. Once an ego-driven tearaway, he’s now found balance and control.

Fans would note how the title of the film ,em>Our World – and associated album, of course – suggests a progression from the title of his first EP My World, a neat signal of his changing view of life.

But, hang on. Isn’t this just clever image management through film? Of course it is. And there’d be something deeply wrong and smelly about that if there was reason to question its sincerity, which there isn’t.

The pushback from Bieber cynics – and they’re still out there – is that if the film is sincere, where’s all the stuff about Bieber’s dark side? His drugs, his arrests, etc?

Simple: Our World is a concert film for fans, not a documentary about Justin Bieber and his chequered career. There’s no place for that in a film like this.

Besides – and here’s a key point – that stuff has already been covered in the web docu-series Seasons, also directed by Michael D Ratner and available free on YouTube.

So why revisit material that has already been covered?

That Bieber was executive producer on Seasons (which set viewing records when it was released in January 2020) and Our World signals clearly that he’s dealt with his many issues and that his chief priority now is to entertain the masses – or, more precisely, his masses.

If nothing else, the film serves as a joyous, exciting, energetic, visually lavish testament to that. And given what the dude is doing now, the film implicitly invites you to ponder what he’ll be doing at, say, 40.