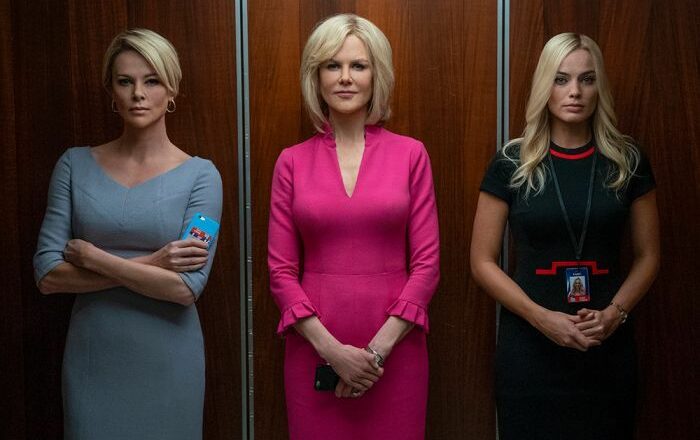 BOMBSHELL ***1/2 (109 minutes) M
The insidious corporate culture at the megalithic Fox network that lead to the shameful, though very well-compensated demise of Fox news chief Roger Ailes in 2016 gets an often compelling, if somewhat sketchy, working over in Bombshell.

With an enormous amount of terrain to cover director Jay Roach (Austen Powers; Trumbo), working from a screenplay by Charles Randolph (The Big Short) strives to compress more dramatic exposition than such a slender film can bear. Thus, there are episodic jerks, sudden jumps and clumsy addresses direct-to-camera.

It’s a scattershot approach, but it does all hold together, thanks chiefly to four fabulous central performances.

And all-but-disappearing beneath a blob of prosthetic make-up is John Lithgow as the ageing Ailes, whose warm, avuncular support for his female staff, whom he encourages with advice and seasoned bon mots, comes with a disturbing sense of entitlement.

Insisting that TV is a visual medium, he demands that female Fox presenters be attractive, have good legs and submit to his private demands, which range from the voyeuristic to the sexual. With their careers at stake, many women have obliged him, however reluctantly.

His history of harassment sends a tornado of scandal through the newsroom when Carlson decides to take legal action against Ailes for victimizing and harassing her. Kelly also admits Ailes came on to her early in her career.

The expected rallying against Ailes doesn’t quite eventuate, however, as women defend him, wearing “Team Roger” t-shirts.

The film nods to some major complications in the scandal: Kelly admits how Ailes respected and promoted her after their incident, which seems at odds with his sexist attitudes.

Kelly is also taken to task by Kayla for not speaking out earlier, which would have saved other women from being harassed. A fictitious character, Kayla appears to have been created to help deliver all the necessary exposition as well as to give voice to the thornier aspects of the #metoo story.

There are so many places where the film could have gone deeper, but overall it paints an effective and disturbing portrait of the entitlement culture that comes with extraordinary power.

Lithgow’s often boisterous performance makes clear that, as obnoxious, creepy and repulsive as his behaviour was, he didn’t see that he was doing anything wrong. It’s a terrific etching of how great authority can bring with it such powerful delusion.

Timely though the film is – it’s a great conversation starter as well as a punchy drama – Bombshell has, to some degree, been gazumped by the very good Showtime mini-series The Loudest Voice, which tells the story of Ailes (played superbly by Russell Crowe) with major emphasis on his sexual misconduct.

The series traverses much the same dramatic territory, though in much greater detail, teasing out the full trauma of Gretchen Carlson’s story and drawing out the contradictions in Ailes’ character. These things Bombshell only skates over.

It is nevertheless remarkable that two major works have come out at roughly the same time about the same topic.

What’s going to be fascinating now is to see how other key events of the #metoo era – a particularly hot-headed and polarizing time in media culture – will play out before the cameras.

Though he left Fox with a huge payout – at both packed screenings your humble reviewer attended, this revelation was greeted with derisive swoons – his shameful downfall was a big moment in the progression of the #metoo movement.

So, too, was the Bill Cosby case, an absolutely fascinating narrative that screams to be filmed. The Louis CK story, too, needs to be told in all its embarrassing detail. Oddly enough it’ll probably be Louis CK himself who does it, which would be consistent with his self-excoriating style.

With the withering Harvey Weinstein now in the stock defending himself against two rape charges it will be telling to see what becomes of his culture-shifting case. Whether or not Weinstein is found guilty, his well-documented history of horrid conduct invites exploration on film.

But what of those high-profile cases where allegations of sexual impropriety have relied more on shrill accusations rather than evidence?

Or why not both? After all, few things make for great drama than the “he said/she said” scenario. Double that if it’s based on the truth – or two people’s colliding versions of the truth.


DOLITTLE ** (101 minutes) PG
After the historic disaster of 1967’s Doctor Dolittle and the delightful 1998 Eddie Murphy megahit (which spawned four sequels, no less) comes this curious offering, with Robert Downey Jr as Dolittle co-starring and speaking (of course) with a large gang of digitally rendered animals.

It’s an odd, expensive misfire, this. Though he produced it, the wiseacre humour and infectious energy we normally associate with performances from Robert Downey Jr are strangely absent. Surely, given the Dolittle premise, he’d be bantering with his animal chums, trading bon mots and quips, like he does with the Avengers when he’s Iron Man.

Yet Dolittle’s line in comedy is remarkably thin. This is a film with few laughs. Not even the ever-versatile Michael Sheen as the villain of the piece can help much.

The central adventure involves Dolittle coming out of retirement and sailing to an unknown island to retrieve an exotic cure for his Queen, who lays dying in her palace, surrounded by conspirators scheming for Dolittle’s failure.

The money thrown into the film inevitably produces some lovely scenery and a few golden snippets from the digital animals. Amidst all the animal hamming – kudos to the digital artists who clearly worked hard to give these creatures character – the favourite is probably the stick insect.

Yet the early spools of the film features some very weird editing where scenes appear to cut around Downey, as though trying to keep his face out of frame. It occurs later, too. Very odd, indeed.

After enduring the film, curiosity demanded a quick bit of Googling. Sure enough, there’s a story from The Hollywood Reporter explaining how poor test screenings resulted in about 21 days of reshoots.

Unfortunately, whatever the initial problems were, the extensive and expensive makeover don’t appear to have done Dolittle much good.


GO! * (102 minutes) PG
Hurts as it does to admit, it’s hard to find anything much to recommend in this Australian attempt at a teen action/romance film.

Set in the allegedly exciting world of go karts, we meet Jack (William Lodder), a disaffected new arrival in a small town who gets competitive on the track.

There’s not much point beating around the bush: this film is terrible.

The acting is painfully stilted, the story sluggish and cliched, including a completely stupid and misjudged homage to The Karate Kid’s Mr Miyagi. The fact that an idea so bad made it to final draft should have signalled to somebody somewhere that something was wrong.

The narrative contains a minefield of plotholes that are headache-inducing to anyone paying any attention. The characters are dull as dishwater (beware the supports) and don’t seem at all interested in behaving like teens. Even veterans such as Frances O’Connor and Richard Roxburgh can’t breathe life into the film.

Directed by Owen Trevor (a Top Gear director) and written by Steve Worland (who co-wrote the marvellous Paper Planes), the film unspools like the kind of charmless mess we sat through in the 1980s. Old-schoolers will get that uncomfortable sense that they’re watching something based on an unpolished early draft that still needed work.

Worst of all, the action camerawork on the track is so ordinary it even includes split screens and shots of people eagerly watching the race on TV sets.

Australian film has shown over the past few years that it can make terrific crowd-pleasing family films. Alas, Go! isn’t one of them.