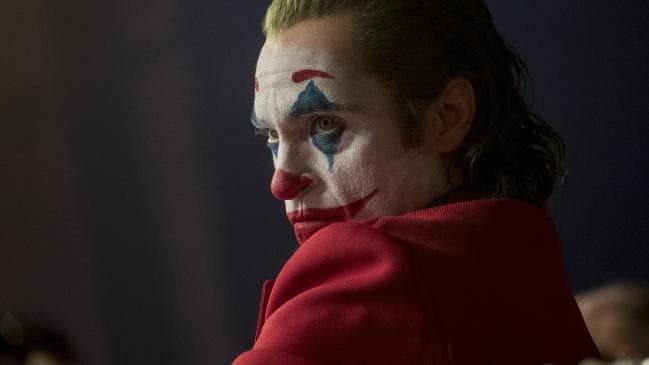 No joke: Joaquin Phoenix is mesmerising as the titular character in ‘Joker’.

JOKER ****1/2 (122 minutes) MA
At a time when Big Hollywood seems mired in a crisis of creativity, along comes a relatively low-budget studio film boiling with fresh ideas and genuine daring.

One of the great things about Joker is that it’s not so much a rebooting but a rethinking of the iconic Batman villain. Technically part of the Batman franchise and the DC Extended Universe, Joker is, in fact, about as anti-franchise a film as you could get in terms of texture and tone.

The other great thing is the mesmeric performance by Joaquin Phoenix. Often caked in garish make-up and subject to involuntary bouts of cackling, he delivers a singularly committed, totally compelling turn as a deeply damaged individual with chronic mental issues and a need to be loved in an increasingly hostile and hateful world.

Worlds away from the caricatures delivered by Jared Leto (Suicide Squad, 2016) and Jack Nicholson (Batman, 1989), there is a spiritual link to Heath Ledger’s Oscar-winning turn as the Joker in The Dark Knight (2008), though Phoenix delves much deeper into the disturbed psyche that turns him into a true urban horror.

In a bold move, especially for a studio film, director Todd Phillips, who co-wrote the screenplay with Scott Silver (The Fighter), has stripped away all preconceptions about the character and rebuilt him from the ground up.

Plugging the film directly into the social-realist tradition of 1970s American cinema, the story is set in 1981 with Gotham City – a barely veiled New York – ensnared in a garbage strike, a crime wave and growing disrespect for authority, especially the police.

Into this steaming stew of urban discontent we meet life-long loser Arthur Fleck, a professional party clown with dreams of being a stand up comic. He shares a squalid apartment with his mum Penny (Frances Conroy) and just can’t get a handle on how to behave around people.

Graced with gritty, verite cinematography by Lawrence Sher (War Dogs) that often makes the film look like it was shot in the 1970s, Phillips and Phoenix conjure the most original origin story we’ve yet seen emerge from the comic book movie genre.

As violent and as thematically dark as it often is – the story really drills deeply into Fleck’s tortured psychology – the film has moments of sheer brilliance and real bravery, especially when it comes to seeing the world from the point of view of somebody who is clearly deranged, as in Martin Scorsese’s 1976 masterpiece Taxi Driver (Scorsese is one of the film’s producers).

From the outset of the film’s production, Phillips was determined to avoid comic book cliches, side step fanboy expectations and defy any obligations to fit into the DC movie universe, thus freeing himself and his crew to deliver something truly unique, and at a relatively low cost. (The film’s reported budget of about $60 million is Uber fare compared to the $2-300 million price tag on most comic book films.)

Job done. He’s not only achieved that but has done it so well it’s almost impossible to connect this film with the comedy Hangover trilogy he was responsible for.