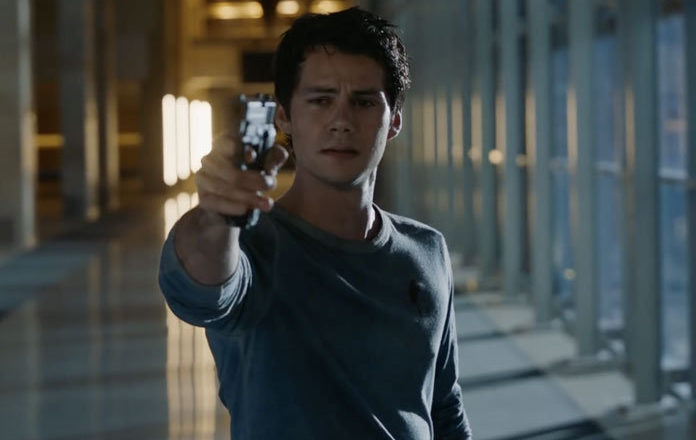 Maze Runner – The Death Cure; Swinging Safari; The Commuter; The Shape of Water

MAZE RUNNER: THE DEATH CURE ***1/2 (142 minutes) M
The concluding chapter to this winning, deeply satisfying teen dystopia franchise offers a well-plotted, action-packed adventure several notches above what we saw in any of the similarly themed Hunger Games or Divergent films.

Before escaping the post-virus wasteland on a reconditioned freighter, Dylan O’Brien and the gang must rescue a group of fellow teens who are tagged for experimentation.

This involves breaking into a gleaming, walled city and confronting Teresa (Kaya Scodelario), the magnificently treacherous girl scientist whose instinct for self-preservation gave the previous film such a memorable climax.
Director Wes Ball, who has done all three Maze films, continues to stages the action with precision, clarity and cinematic flair. Attention to small details, such as security guards who are actually good at their job and vehicles that obey the laws of gravity, help give this fab futuristic adventure a refreshing dose of realism.

Set in a cozy cul de sac in a coastal Queensland suburb we follow the low-flying fortunes of three families. While the adults tentatively step towards an experiment with the concept of the open marriage, the kids amuse themselves with filmmaking and property destruction.

To his credit, the film does shift gear once these low-rent hedonists realise they are actually meant to be responsible parents. Unlike the vast bulk of Australian comedy films, which can barely sustain one viewing, Surfing Safari definitely holds up to a second helping, if for no other reason than to relish the period detail embedded into each frame, right down to the exploding pyjamas and the boxes of Kentucky Fried Chicken.

Making Swinging Safari took a lot out of Elliott, who at one point thought he was having a heart attack. We had the good fortune of having a very lively face-to-face with him about the film, the 1970s and, of course, critics, some of whom he believes can be too cruel by half.

Elliott is a great conversationalist and loves a bit of verbal biffo. Hence, his language can get a bit colourful. So sensitive ears need be cautioned that he drops the S-bomb a couple of times, as well as one F-bomb, though that has been muted.

To watch a trailer for the film, please click here:

THE COMMUTER *** (95 minutes) M
Once again, everyman action-man Liam Neeson encounters trouble in transit as a simple train ride home after losing his job turns into a race against the clock to locate a passenger, the punishment for failure being a world of hurt for his family. After the Taken films, Unknown, Non-Stop and Run All Night, Neeson has promised to end his lucrative run as a middle-aged action hero with this nifty little number. Working again with Juame Collet-Serra, who did the last three films, he’s more frantic and believable than usual, with the movie’s real-time feel adding a nice edge of urgency.

THE SHAPE OF WATER * (123 minutes) MA
From the world’s most over-rated A-list director, Guillermo del Toro, comes yet another visually distinctive, tonally flat work of glum fantasy. Set in the early 1960s, Sally Hawkins plays a mute cleaning woman working in a secret facility that becomes a holding pen for a human-like sea creature. Hawkins forms a relationship with the poor critter while her boss, played by Michael Shannon, is keen on learning more about it via vivisection, which is somehow portrayed in the film as being unreasonable, despite it being a science facility. At the same time, her desire for extreme intimacy with this jagged man-fish is seen as a natural romantic progression.

As usual, Del Toro’s acolytes have promptly fallen into line praising this overlong serving of pseudo sci-fi pap just as they did Pan’s Labyrinth, Crimson Peak and Pacific Rim. While watching the genre muddle of this movie one does wish Del Toro would return to making the wonderfully overcooked cheeseburger epics he does so well, such as Hellboy and Blade 2, or even to the simplicity of his early frightfests such as The Devil’s Backbone, Cronos and Mimic, a terrific film where insects impersonated people.