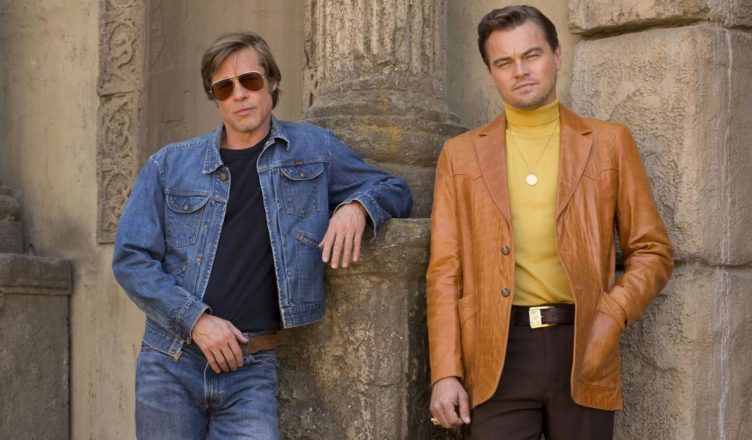 Two peas in a jam: Brad Pitt & Leonardo DiCaprio shine in Quentin Tarantino’s Once Upon a Time in Hollywood.

The latest cinematic joyride from Quentin Tarantino is a rich, gleaming valentine to old-school Los Angeles, a love he shares by offering us a ravishing, sun-lit scenic tour of workaday Hollywood in the late-1960s.

It’s a film fuelled by Tarantino’s sweet taste for nostalgia, so packed with period detail and movie signage that even half-hidden billboards in the background are designed to elicit a warm response about films of a by-gone era.

More leisurely paced and less story-driven than his WW2 adventure Inglourious Basterds or his slave-era western Django Unchained (arguably his best work since 1994’s epochal Pulp Fiction), the film is, in essence, an elegantly dressed ramble that builds slowly – very slowly – to a rather memorable climax.

Laced with plenty of colourful digressions, character vignettes and conversation scenes that take their time, the film follows the fading fortunes of Rick Dalton (Leonardo DiCaprio), a has-been whose fame as a TV cowboy in a cancelled show has fermented into a long series of villainous guest spots on other shows.

His loving agent Marvin Schwarz (Al Pacino) is naturally concerned about his client’s tail-spinning career and is keen to get him into films where he can play the hero again.

Accompanying him, Entourage-like, is his friend and stunt double Cliff Booth (Brad Pitt). He, too, wants work but seems less concerned, happy as he is to live with his loving, well-fed, extremely well-trained dog.

As the film ambles along in all sorts of directions – Tarantino is nothing if not playful with his audiences and their expectations – rising from the background is the growing menace of Charles Manson and his “family” of hippies. They occupy a derelict film ranch and their presence leaks into the film gradually, like a pungent odour.

Once Upon a Time… might not be Tarantino at his very best, but his near-best is certainly more than good enough.

Creating a vivid and beautiful mosaic of yesteryear Hollywood – his wide shots of busy main streets are truly stunning in their detail – he takes some terrific deep dives into his characters.

Most touching are the glimpses we get of the inner life of Dalton, a fragile star with speech issues living in morbid fear of obscurity and of the effect alcohol is having on his on-set behaviour. His moments with a deep-thinking child co-star (Julia Butters) are among the finest Tarantino has put on screen.

Touted as his ninth film – he’s vowed to retire after his tenth – the film is vintage Tarantino, full of engaging banter, sudden flashbacks, fantasy sequences and loving barbs about movie machismo, showbiz and the filmmaking process. Fans will eat it up like teens at a discount buffet.

Yet it’s Tarantino’s love of incremental tension-building that really sells – and sets apart – Once Upon a Time in Hollywood. He’s long proved a master at delivering great pay-offs and in that regard he might well have hit a career high point here.

MIFF PICKS
THE AUSTRALIAN DREAM
Who knew that our nation would divide and erupt in non-stop debate over racism when, in 2013, AFL footballer Adam Goodes (in)famously had a 13-year old girl thrown out of a game for calling him a name? This detailed package of the media and public reaction to the actions and utterances of Goodes is framed by his backstory and subsequent behaviour, yet there is enough fairly presented information in it for people to still form an independent assessment of the Goodes incident (which would have been a much better title, by the way).

There is way too much of journalist Stan Grant in the film, whose moralising becomes a tad tedious, but a good balance is struck. Goodes is given plenty of screen time as is commentator Andrew Bolt (and others), whose views reflected those throngs who booed Goodes out of the game.

A genuinely insightful and controversial documentary is The Australian Dream, though one wonders whether the film is igniting debate it sought to quell. Whatever its intentions, the film’s value as a talking point is beyond any sensible argument.
Screens: Saturday 17 August, 6pm & 6.15pm, Hoyts

MEASURE FOR MEASURE
Director Paul Ireland (Pawno) does a splendid job reshaping Shakespeare’s play as a modern, Melbourne-set crime thriller full of revenge, betrayal and some very topical cross-cultural friction as a girl who is Muslim dangerously falls for a boy who is not. Hugo Weaving is great as a deep-voiced villain in hiding while Mark Leonard Winter steals scene after scene as an ambitious underling with power on the brain. The top-shelf cast also includes Daniel Henshall, Megan Hajjar, Fayssal Bazzi, Harrison Gilbertson and veteran character actor John Brumpton. Strong stuff.
Screens: Friday 16 August, 9pm, Hoyts

IRON FISTS AND KUNG FU KICKS
For those tempted to dismiss the genre of cheesy, chop-socky martial arts films from the 1970s – and beyond – comes this very funny, ridiculously well-researched, often illuminating warts-and-all documentary that illustrates the cultural import these films had on kids and filmmakers. The legacy of Bruce Lee is given its due and no quarter is spared for the depths some producers went to exploit Lee’s name. Similar in spirit to Not Quite Hollywood and Electric Boogaloo: The Untold Story of Cannon Films, the film mixes a lot of fun in with all the info. Even casual fans of the genre will lap it up.
Screens: Friday 16 August 8.45pm, Sofitel, Saturday 17 August 1.15 pm, Kino

LITTLE MONSTERS
A very silly, very funny film in which a pre-school teacher (Oscar-winner Lupita Nyong’o) protects the kids under her charge by making them believe the zombie apocalypse that has descended upon them is something else. Written and directed by Abe Forsythe (Down Under), Little Monsters is neither horror-comedy nor black comedy (like Child’s Play, say), as the only real sense of dread you get is from Josh Gad, who plays a children’s entertainer who doesn’t much like kids. Still, lots of fun with plenty of laughs and good-natured dismemberment.
Screens: Saturday 17 August, 9.30pm, Capitol

EMU RUNNER
A winning performance by new-found child actor Rhae-Kye Waites anchors a simple, bitter-sweet story of the impact tragedy has on a free-spirited indigenous girl whose growing connection to the land comes at the expense of her school attendance and the patience of her father (played nicely Wayne Blair, director of The Sapphires and Top End Wedding). Set in the remote, dust-swept town of Brewarrina (complete with tumbleweeds), the delicate direction by Imogen Thomas, who worked closely with cultural consultant Frayne Barker, occasionally hits moments of real poignancy and beauty as the girl tries finding her new place in a new world.
Screens: Saturday 17 August, 11am, Hoyts