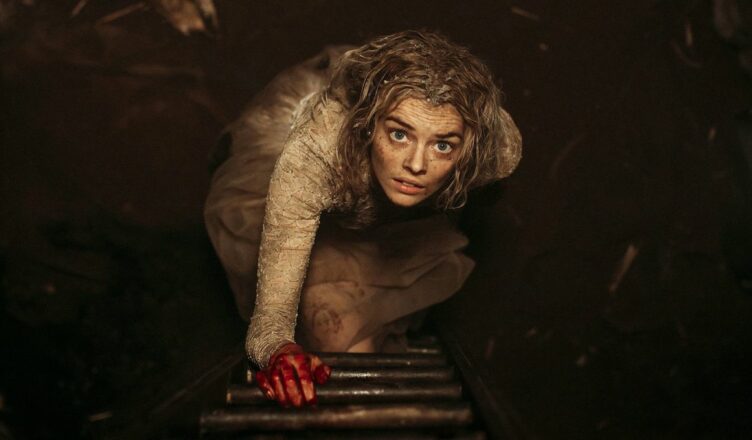 Wedding Day Blues: Australian actress Samara Weaving puts in a winning performance in the American horror-comedy ‘Ready or Not’.

READY OR NOT ***1/2 (95 minutes) MA
Think of Meet the Parents as re-imagined by Stephen King and you’ll get some idea of what to buckle yourself in for with the twisted, bizarre offerings in Ready or Not, a knockout horror-comedy, skillfully directed with a terrific balance of laughs, scares and cartoonish gore.

It’s wedding day for the giddy Grace (Samara Weaving), but though she’s crazy-excited she’s concerned that the super-rich family of her partner Alex Le Domas (Mark O’Brien) is not exactly extending her a warm welcome.

His father Tony (Henry Czerny), mother Becky (Andie MacDowell) and comically super-creepy (Helene Nicky Guadagni) consider Grace as a stock-standard gold digger, which is the stock-standard way they consider all prospective new additions to the family and its fortune.

So to prove themselves worthy of entry and respect, all such people have to submit to a post-wedding ritual: they must engage in a game, the goal of which is not so much to win, but to survive.

Thus it is that Grace promptly finds herself locked in the sprawling family mansion, running about its labyrinth of corridors and secret passages trying to keep from being shot, speared, stabbed or dismembered.

With its tongue firmly in its cheek, the film is a playful, relentlessly paced jaunt, energetically directed by Tyler Gillett and Matt Bettinelli-Olpin (they partook in the 2012 horror gem V/H/S) who clearly love hitting audiences with jokes and jolts in rapid succession, one-two punch style.

The film has a fairly decent quotient of gross-out “ewww” moments that play like a loving homage to the blood-drenched horror films of the 1970s & ’80s. There is some nifty digital work in the film, but most of the effects have that reassuring look and feel of analogue special effects.

The cast is fabulously committed to this splatfest. It’s always great to see a serious, seasoned actor such as Henry Czerny (Clear and Present Danger; Mission Impossible; The Boys of St Vincent) do comedy so well and it’s always good to see Andie MacDowell in, well, anything.

Most importantly, special kudos need to go to lead actress Samara Weaving. She really makes a meal of her role in Ready or Not as Grace morphs from naive newlywed to vengeful angel of death – and all in a wedding dress and sneakers. She’s a step beyond the standard scream queen; beautiful, funny and not to be messed with – a winning combination. People who delight in Weaving’s performance will be pleased no end that she is Australian.

All up, Ready or Not makes for perfect, fun Halloween fare. It’s actually a tad more enjoyable the new Zombieland film, which is a fine sequel, save that it doesn’t have an original concept driving it like this has.

Well, sort of original. It’s a riff on 1932’s The Most Dangerous Game – but why nitpick when you’re having fun?

Eager to oblige and prove herself a good corporate citizen Theresa is nonetheless preoccupied with the wedding of her daughter Grace (Abby Quinn) and the well-being of her husband Oscar (Billy Crudup), an artist facing a tough sellers’ market. With a few too many things on her plate, she convinces Isabel to stay in New York several days more so they can have a proper meeting, casually inviting her to the wedding as an incentive.

She turns up late, takes her seat – then spots Oscar. That’s when the tension really starts to boil, though writer/director Bart Freundlich is careful to raise the pitch in increments as the revelations build in what is an exceptional, emotional mystery drama about pride, ego, altruism, personal identity and parentage.

The film is adapted from the 2006 film by Susanne Bier (Brothers; In a Better World; Bird Box), and serves as a prime example of how remakes should be done in that it introduces something fresh and creative to the original’s story.

The case here is that the gender roles of the chief characters are changed, a singularly bold and worthwhile decision by Freundlich – who credits his wife Moore with significantly steering the film’s direction – that puts two terrific actresses centre frame for most of the film.

Williams does a solid job trying to keep her moral compass focused on her beliefs while Moore, fresh from the triumph of Gloria Bell, again proves that she is arguably the best American actress of her generation.

As Theresa, she portrays a woman on the verge of a well-planned, hard-earned mid-life renewal who has to reconfigure her life to accommodate a set of completely unexpected variables. It’s a great performance at the heart of a mature, adult drama.

ZOMBIELAND: DOUBLE TAP *** (99 minutes) MA
It’s ten years on from the surprise hit of Zombieland and the original gang, including director Ruben Fleischer, is back to deliver more cartoony fun and games and gore with the Undead.

Our four zombie-slashing heroes – Tallahassee (Woody Harrelson); Columbus (Jesse Eisenberg); Little Rock (Abigail Breslin); and Wichita (Emma Stone) – have moved in to the abandoned White House, enjoying the surprisingly well-preserved luxuries of the place once it’s explained how America’s power grid miraculously manages to run itself automatically so long as the dams are full.

After an early spurt of zombie killing, the plot gets going when Wichita and Little Rock leave the quartet because they feel disrespected. Seems Little Rock doesn’t like being treated like a little girl by her surrogate father Tallahassee and Wichita needs space from the clumsy romantic advances of Columbus who, as in the first film, provides a giddy narration.

In their absence, the lads check out a shopping mall and discover Madison (Zoey Deutch in scene-stealing performance), a displaced Valley Girl airhead who has been hiding from the zombie hordes in a giant fridge. She joins them at the White House, happily obliging Columbus in bed.

With the return of Wichita, who tells them Little Rock is in need of rescuing, the film quickly switches to road movie mode, which is essentially what the first film was (and, frankly, what a lot of zombie films are). It’s but one of many proficiently reheated features here as the crew encounter other survivors (Luke Wilson, Rosario Dawson) and ever more zombies.

As fun as the film is, Zombieland 2 is a sequel subject to the law of diminishing returns. With very little story to go on – the only real arc of interest is Little Rock growing into an independent woman – there’s no real threat for the main characters to contend with other than easy-to-kill zombies.

So director Ruben Fleischer obligingly keeps the intricately choreographed fight scenes coming at a snappy pace, along with the jokes and cultural references, with Elvis Presley featuring heavily.

Although it’s explained how some zombies are harder to kill than others (with some so stupid they’re left alone to do themselves in), they are nonetheless a cinch to terminate, especially when there’s never a supply issue with weapons or ammunition. The only real danger is that the sheer number of zombies might overwhelm the humans.

Thus, we are given a pretty decent and fiery action finale involving post-apocalyptic hippies and a zombie-slaughtering device that owes a lot to the behavioural traits of lemmings. It’s an easy out, but it does get some decent laughs.

PROMISED *** (93 minutes) PG
When it comes to films about arranged marriages the instinctive aversion to the idea typically sets the scene for a showdown between crusty old traditions and the changing values of the modern world. And there’s been so many of them the premise has spawned a vocabulary of cliches, with custom being challenged and eventually defeated by the unifying power of true love.

Yet in a remarkable debut film, writer/director Nick Conidi has managed to avoid cliches or easy dramatic resolutions with Promised, an incisive, engaging period drama set in the multi-cultural wilds of Melbourne suburbia in 1974.

It’s a time when young women were reading Germaine Greer’s The Female Eunuch and pushing back against the values of their parents as they redefined their place in the world and in marriage.

Revulsion is certainly the initial reaction of university student Angela (Antoinette Iesue), who has long been promised by her loving Italian parents Sal (Paul Mercurio) and Rosalba (Tina Arena) to marry Robert (Daniel Berini), a perfectly nice and sensitive boy of good Italian stock who has just returned from Oxford with a law degree.

With Robert’s return, however, the pressure is on for her to honour the arrangement, which her friends also think is ridiculous and out-of-date. Continued resistance, however, begins to grind against some harsh realities about Tom’s personal situation.

Although it’s skimmed over a tad too quickly in the film, Angela’s strong will ultimately relents. Surprisingly, she finds that her situation, though compromised, isn’t all that bad – she’s got a devoted husband with his own legal practice, a house, no debts, a supportive family and all the time she wants to indulge her love of writing romantic fiction.

It’s a comfortable but confounding position and her life is now pitted with big, tough questions: can she grow to love somebody? Will she ever reciprocate the genuine feelings Robert has for her? Can she accept the hard reality of what her alternative life would have been like?

Based on his own experiences, director Conidi (IMDB lists Tony Ferrieri & Nathan Primmer as co-directors) deftly teases out the strands of the story and avoids cliches, such as turning Robert into a prat, or having Angela simply abandon the marriage. Robert clearly loves Angela and she finds the challenge to her romantic idealism oddly enticing.

A satisfying and well-thought through film – with a very clever final reel – the performance by Berini as Robert has more energy than Iesue’s, who oftentimes seems icy and aloof. Perhaps that’s understandable given Angela’s circumstance, still her turmoil could have been turned up a notch or two, especially as the story swerves towards its climax.

LOCUSTS ** (85 minutes) MA
The effort is there but there is just not enough scope, pay-off or hole-free plotting to the shenanigans in this crime-comedy-heist flick from director Heath Davis (Broke; Book Week).

On the occasion of his father’s passing, financially strapped technology hotshot Ryan Black (Ben Geurens) returns in his flash car to the dusty environs of Serenity Crossing, a formerly bustling mining town now in its death throes.

He hooks up with his long-neglected ex-con brother Tyson (Nathaniel Dean) and former flame his Izzy (Jessica McNamee), a strong-minded single mum who makes ends meet by gyrating at the local strip club, a peculiar place that manages to maintain a sizeable clientele despite its remote locale.

There are local hoods, of course, and they heavy Ryan for some debts his dad left behind. He’s only got a few heated hours to get the cash together, and they’ve got Tyson tied up in a garage as security, so it looks like Ryan might have to take a drastic short cut and steal the dosh. And his options are limited.

The performances are fine, especially from Geurens upon whose shoulders the film largely rests, but the film’s scattershot direction can’t seem to decides if it’s a heist comedy, a crime-drama, or a comedy-drama. Peter Yates proved with the 1972 classic The Hot Rock how well a crime comedy can work when you take the plot seriously.

Regrettably, the premise of Locusts could have benefited with one or two more passes through the plot filter to squeeze out all the implausibilities and loose ends that keep from making this well-mounted little number a real winner.