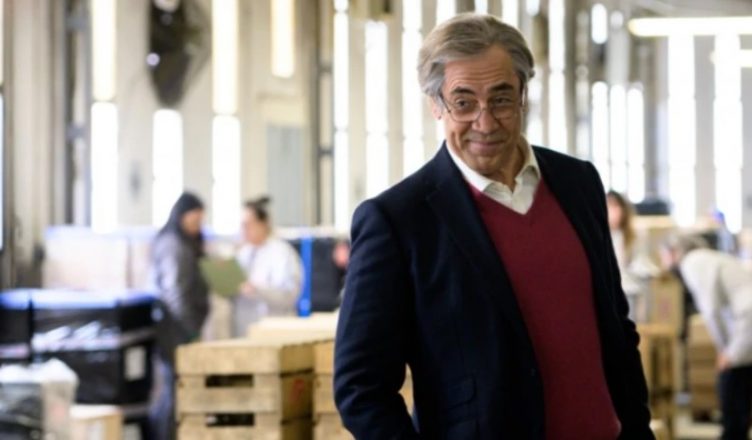 Out of order: Javier Bardem plays an ambitious company head in ‘The Good Boss’.

THE GOOD BOSS ***1/2 (120 minutes; subtitled) M
Order unfurls in a funny, sharp Spanish workplace satire that peels back the glossy, feel-good veneer of a successful family company that manufactures scales.

As the paternal boss Julio Blanco, Javier Bardem is on point as the award-hungry, image-conscious, ethically sticky head of the firm.

He exudes warmth and confidence, insisting how important it is for his employees to feel like family rather than as mere members of a team. So he likes getting involved in their lives.

His presumed employee management skills are put to the test, however when a worker he fires becomes so resentful for having his life upended he stages a sit-in demonstration outside the company gates.

It’s an apt trigger for the wheels to start coming off Blanco’s control of his regulated world, with his big dream of winning a business award now under threat.

Other problems begin to surface, not the least of which is the arrival of Liliana (Almudena Amor), an intern with a sultry air that might as well be a flashing neon sign floating above her that reads “trouble”. For a supposedly happy family man like Blanco she presents a temptation he doesn’t need, but finds difficult to resist.

Holding the film together with a textured performance that becomes increasingly untethered to the security he loves, Bardem is the energetic centre of a top ensemble.

A huge, award-winning hit in Spain, it seems a likely candidate for an English-language remake. If that happens, hopefully Bardem can reprise his role. He’s that good.

HAPPENING *** (100 minutes; subtitled) R
With her ambitions for a career threatened by an unwanted pregnancy, high school teenager Anne (Anamaria Vartolomei) tries to procure an illegal abortion in 1963 France, an enterprise that causes as much emotional anguish as physical pain.

Based on the novel L’événement by Annie Ernauxby, director Audrey Diwan brings a strong sense of realism to an often harrowing abortion drama, including graphic scenes that border on horrific.

The film’s chief drawback is how some of the dialogue has the tinny ring of progressive, present-day sentiment.

As smart as Anne is, some of her highly articulate objections to being oppressed by officialdom sound like they come from a feminist handbook rather than from a young woman in an increasingly dire situation.

That’s a quibble, though. Anamaria Vartolomei puts in a strong, affecting performance as a desperate woman who can see how the system is designed to deprive her of the bright future she wants for the drab future assigned to her by the state.

It’s a very good, if rather gruelling film that, like many other fine films dealing with abortion – 4 Months, 3 Weeks and 2 Days; Never Rarely Sometimes Always – carries an unsettling topical resonance.

Though the story of Happening is set in 1963 France, its tale of a woman trying to illegally terminate her pregnancy might be a portent of things to come.

With the peeling back of laws initiated by Roe vs Wade – the landmark 1973 US Supreme court ruling that gave women reproductive control – comes the fear that the danger and indignity of illegal abortions could return.

It’s a sad sign of the times that a film set 60 years ago depicting such a horrible scenario could still have relevance today.

Footnote: Occupying a small corner in the canon of films dealing with abortion is an underrated 1982 American teen film called The Last American Virgin. Though it has the form of the silly, knockabout teen sex comedies common in the 1980s, it actually turned into a thorny tale about a teenage boy working to pay for a girl’s abortion. It’s heartening to see videos on YouTube reappraising this neglected film for the gem it is. Unfortunately, it’s nowhere to be found in the stream.

THE LOST CITY **1/2 (112 minutes) M
In a surprisingly tepid action-adventure comedy, Sandra Bullock plays a frustrated writer of cheesy romance/adventure novels who goes on a real-life adventure with the model who features on her book covers, played by Channing Tatum.

The lark starts well, with Bullock’s Loretta Sage suffering from an extreme version of what author Paul Sheldon (James Caan) had in Misery, with huge success proving no substitute for literary integrity.

There are some laughs. A press conference in which she is forced to wear a purple sequin jumpsuit is pretty funny. It’s also fun watching Daniel Radcliffe playing a villain with a chip on his shoulder who kidnaps Sage to help him find a lost treasure on a remote island before a growling volcano wipes it out.

It ends well too, with a decent action payoff and just enough spectacle.

Sadly, the film has a prolonged, slow middle section in which directors Adam and Aaron Nee try hard as heck to generate comic and romantic sparks between Bullock and Tatum. It’s way too forced and fizzles under the weight of some poorly judged comic scenes.

The sight of Bullock removing leeches from Tatum’s toned torso might be the stuff of dreams for middle-aged women across the globe, but it comes across as a pretty cheap antic. We saw Bullock do similar shtick with Ryan Reynolds in The Proposal so, yeah, it might be high time to retire the routine.

Also, we get the usual slew of supposedly improvised dialogue ending with the phrase “right now”, a favourite of Tatum’s and one that has simply become irritating. Tatum can certainly be funny (Jump Street; Magic Mike; Hail, Caesar) but the effort here is too obvious.

While the film clearly wants to hit the pitch of classic adventure frolics such as Raiders and Romancing the Stone, it falls well short.

Regarding the latter, the Nee brothers might well have seen the film for research yet haven’t managed here to replicate that film’s delirious mix of humour, action and lunacy.

Still, as a holiday time-killer you could do worse.

EVERYTHING EVERYWHERE ALL AT ONCE *** (140 minutes) MA
Brace yourself for the cinematic sugar rush that is Everything Everywhere All At Once, a film so intent on swooping you into its alt-headspace so viscerally and with such speed the makers didn’t even have time to put commas in the title.

It’s a singularly zany, off-the-wall, over-the-top, crazy sci-fi comedy from left-field writer/directors Dan Kwan & Daniel Scheinert (Swiss Army Man) about a financially strapped laundromat manager who falls into a vortex of multiverses that give the directors plenty of excuses for martial arts fights, rapid-fire editing and a dizzying, eye-watering pace.

While it’s nutty as all get-out, the film actually hangs together as we dart across time and space, mostly within the confines of an Internal Revenue Service branch office. The cast includes a commanding Michelle Yeoh (no stranger to martial arts since Crouching Tiger, Hidden Dragon) and a scenery-munching Jamie Lee Curtis who dives into the insanity, positively relishing the chance to play an officious old coot.

It’s some achievement that the Daniels (as they are known) establish a loopy logic so that when we see main characters in a world where they have hot dogs for fingers or as rocks on a desolate planet, it actually makes sense.

FANTASTIC BEASTS: THE SECRETS OF DUMBLEDORE *** (142 minutes) M
To be honest, any positive response to Fantastic Beasts: The Secrets of Dumbledore might well be due to the sheer relief that it is sufficiently unlike the first two entries in the Fantastic Beasts Harry Potter sub-franchise so as to be actually pleasing – even enjoyable – to behold.

So wretched, over-produced, barely comprehensible and dull were Fantastic Beasts and Where to Find Them and Fantastic Beasts: The Crimes of Grindelwald that they triggered in many filmgoers a case of a newly diagnosed affliction known as B.M.I.M.L. – Bad Movie Induced Memory Loss.

This is a condition where a film is so totally terrible the mind is forced to defend itself by erasing all memory of it, aside from the actual experience of watching it.

Thus it is that when victims of the first two Fantastic Beasts – your humble reviewer included – are asked what they remember of the films, they can only recall the pain of having seen them, not anything to do with the story or the characters.

Fortunately, watching the latest adventure does not feel like having an orbital sander pressed against your brain. It even has a decent story you can actually follow.

Again directed by David Yates (he also helmed the Potter films Deathly Hallows, Order of the Phoenix and Half-Blood Prince) the latest instalment has the nasty Gellert Grindelwald (Mads Mikkelsen, replacing Johnny Depp) back on the scene.

Released from prison and absolved of his crimes, whatever they were – apologies; that’s BMIML kicking in – Grindelwald is now running for high office in the Wizarding World, which also happens to be the patented name of the universe created by multi-billionaire JK Rowling. (She produced and co-wrote the film, wisely maintaining the creative stewardship of the franchise she established with the first HP film).

Set in 1932, the film takes place in the magical realm, which turns out to look just like the non-magical realm normal people inhabit, except that cups and saucers float in the air.

It’s both worlds Grindelwald wants to control, and you’d have to be pretty thick not to pick up the overt Hitler references, especially when he speaks about wiping out people who aren’t the equal of his followers.

Far more contained and coherent than the previous films, Secrets of Dumbledore is also a ravishing visual treat to behold. It’s another $200 million splash by Warner Bros and it looks it, from the period décor to the A+ VFX, accounting for vivid detailing on the many fabulous beasts that populate the film.

There’s been some controversy over all references to the homosexual relationship between Dumbledore and Grindelwald (about two minutes) being excised from the Chinese version of the film.

Regrettable as that is, Chinese cineastes who keep their ear to the ground are aware of when they’re getting a bowdlerized version of a Hollywood film, either through social media or word-of-mouth.

To wit, in February Fight Club was re-released in its original form after an outcry over the altered ending for the Chinese market, which featured a closing caption saying how the cops stopped the building demolitions and won the day.

It’s a sound reminder of how censorship often achieves the exact opposite of what its proponents intend and that, try as they might, authorities have increasing difficulty putting reins on the power of information.