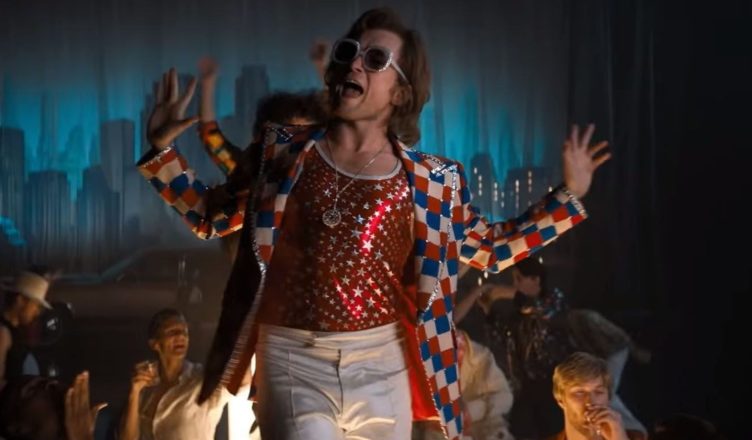 Adrenalised by great lead performances by Taron Egerton as John, Jamie Bell as lyricist Bernie Taupin and Bryce Dallas Howard as John’s mum, the film establishes right from the get-go that even though Elton John produced this musical biopic, it’s going to show all the warts involving drugs, sex, money, anger and John’s apparently inexhaustible ability to imbibe vodka by the quart.

An Alcoholics Anonymous meeting is used as the framing device for the story-telling in which John reflects on his early life, his rise to fame and riches, his parental issues, his sexuality and his self-destructive spiral.

Rocketman is a wildly busy, hugely entertaining film that consciously shifts tone from scene to scene. One minute you’re in a subdued dramatic moment about song writing, contract negotiation or domestic discord, the next you’re in the middle of an elaborate musical number.

And these musical sequences are something else. Although many of Elton John’s biggest hits are featured in some form, Rocketman is no jukebox musical.

In keeping with the tradition of the best musicals, the song-and-dance scenes form an intrinsic part of the story, transitioning from one chapter to another and visually illustrating the state of John’s life and mental health.

To the great credit of director Dexter Fletcher and his crew, these numbers positively brim with creativity, energy and deliciously indulgent camera work, complete with long single takes, swirling tracking shots and all sorts of arresting imagery. One key sequence, for instance, takes place at the bottom of Elton John’s swimming pool during a party that he refuses to attend.

Yet for all its shifts in tempo, Fletcher and his screenwriter Lee Hall (Billy Elliot) worked hard to give the ferocious swirl of Elton John’s life a coherent through line. There are a few flashbacks, but the narrative is essentially chronological.

And though Bernie Taupin’s story is equally worthy of a biopic – his importance to Elton John is not understated – the film keeps to its first-person perspective, the result being a clear tracking of John’s psychological journey as fame, fortune and the need for love mess with his mind.

It was always going to be tough cramming so much life into a single film and the film has its flaws, with stretches that are too jerky and episodic.

Also, some of the dialogue where characters suddenly spout out statistics about Elton John’s career signals that ever-present danger of biopics where the filmmakers fall into the trap of writing the research. (We saw that syndrome in the Australian TV biopics of Olivia Newton-John, Paul Hogan and Molly Meldrum.)

But this is essentially nitpicking at a film that is gloriously engaging, loud, fun, sad and ultimately uplifting. It remains to be seen – though it seems somewhat doubtful – whether Rocketman can replicate the phenomenon that Bohemian Rhapsody was.

Whatever the case, it’s a rollicking musical yarn with great visual style and a bitter-sweet twist.

Though director Dexter Fletcher has made a fistful of good films – Wild Bill; the musical Sunshine on Leith; and the aspirational sports dramedy Eddie the Eagle (with Taron Egerton and Hugh Jackman) – he is best-known as the ‘saviour’ director of Bohemian Rhapsody who stepped in and completed the film (30% of it, at Fletcher’s estimate) after director Bryan Singer was fired over allegations of sexual misconduct.

Fletcher began as a child actor, starring in the films Bugsy Malone, The Bounty and The Elephant Man. He appeared in the TV series Press Gang and, later, in the films Lock, Stock and Two Smoking Barrels and Layer Cake as well as the major TV mini-series Band of Brothers.

As a young actor, Fletcher was graced with rapid success and sudden wealth, which lead to problems with drugs and money, at one point forcing him to sleep in his car.

The parallels between Fletcher’s personal experiences in show business and Elton John’s were not lost on him when he was offered the job to steer Rocketman.

During a pre-release promotional visit to Australia, Dexter Fletcher granted a sit-down and gave a terrific and very lively interview.

Not that we were exactly holding our collective breath over it, but our favourite Japanese big-screen monster and good close personal friend Godzilla has returned in what is thankfully a much better throwaway, FX-driven epic than that 2014 mess directed by Gareth Edwards (Star Wars: Rogue One).

This one is helmed by Michael Dougherty (he co-wrote Superman Returns and X-Men 2) who really keeps things moving as Godzilla finds some new competition to deal with.

The set-up proposes that Godzilla is part of a prehistoric super-species designed by nature or God (whose presence features heavily in this film) to maintain balance on earth.

Trouble is, some monsters want to co-exist with humans while others want to destroy humans. Godzilla, luckily, is on our side. Not so luckily, the giant three-headed flying dragon called King Ghidorah isn’t.

Eager to see the monsters face-off against each other is snarling eco-terrorist Colonel Alan Jonah (veteran Charles Dance hamming it up for all he is worth) who has co-opted the slightly more sensible Dr. Emma Russell (Vera Farmiga) to help him by kidnapping her and her daughter Madison (Millie Bobby Brown from Stranger Things). Emma invented a sonic device that can rouse these monsters and sort of control their moods.

In the mix is Dr Mark Russell (Kyle Chandler), Emma’s estranged husband and who daughter Madison desperately wants back in their lives, despite her mother’s warnings that he is best left out of the family.

Now, what is surprisingly terrific about Godzilla II is not so much the balletic clashes of the monsters – which include a bunch of other over-sized critters including Mothra, the giant moth – but the way the storylines blend without any clash at all.

On the one hand you’ve got the spectacular monster smackdowns, and entwined in all that is the rather touching story of parental tension and competing affections between the parents and their adventurous daughter.

Admittedly it happens amidst epic scenes of destruction, still kudos to Dougherty (who co-wrote the screenplay with Zach Shields) for actually making us care about this family unit amidst all the expensive demolition of cities and landscape (not even volcanos are safe in this one.)

The fact that we feel anything is also a huge credit to the actors who perform with straight-faced conviction. Even the great Sally Hawkins reprises her role to give the drama a bit of body. Performances like these in popcorn films like this never get the respect they deserve.

There is some pretty obvious religious imagery at work in Godzilla II, the idea being that this confrontation sees Ghidorah as an agent of Satan and Godzilla as a soldier of God.

Also, there seems to some surprisingly articulate back-handed commentary about environmental extremist and the righteousness of the Green movement. This is given voice by the conflict between mother and daughter, with Madison identifying her mum as one of the film’s humanity-hating monsters.

Who thought a Godzilla film would have all these layers bubbling along beneath the wrestling matches?

Also, note how Godzilla and Ghidorah each have indicator lights to show when they are powering up, just like a battery charger. It’s a nice design touch.

Oh, and be sure to hang out until the very end of the credits for the payoff to all the sequel hints embedded throughout the film.