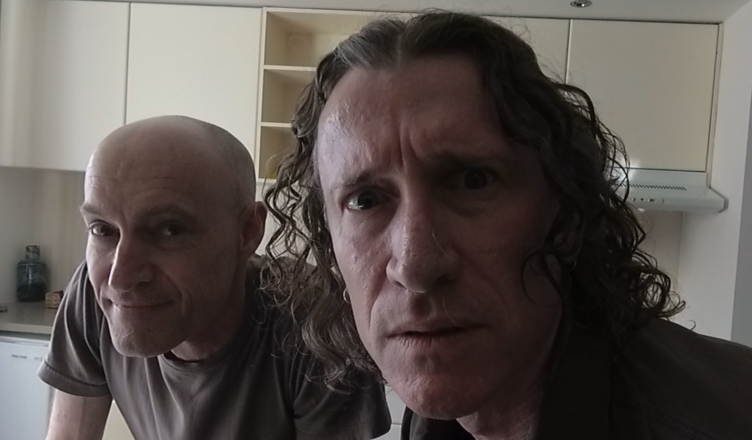 The Umbilical Brothers, Shane Dundas (left) and David Collins, take on the technically toughest show in their 30-year career with ‘The Distraction’.

It was an off night for the Umbilical Brothers, though you couldn’t tell that from the audience reaction.

Their new show The Distraction is easily their most technically complicated and daunting yet. It is also ceaselessly funny and the crowd at the Fairfax Studio on Friday night (26 March) ate it up with relish.

In a significant shift away from their signature style of visual, mime-like comedy, Shane Dundas and David Collins (the one with the bangs) have incorporated a cascade of hilarious green-screen visual effects into their new show, which recently took out the Best Comedy Show award at the Adelaide Fringe Festival.

The Distraction was supposed to premiere in Melbourne at last year’s comedy festival, but those plans – like the plans of so many comedians – were derailed by COVID-19.

The show’s demanding format has the guys rushing between two carefully placed cameras where they perform with props in front of green screens on the stage while their tech wiz Doug Baynes – an equal creative partner in the show, Dundas insists – marries their antics with hurriedly composed images that are projected onto the giant camera feed above.

In compliance with the stern edict issued during their introduction, all audience members are supposed to focus their attention solely on the giant screen above, not on what is happening on stage.

Nobody follows these instructions, of course.

Central to the show’s rapid-fire pace and infectious sense of play is the delight in toggling between the shenanigans on the screen and the intricately co-ordinated dashing about the guys do on stage.

They also like to train the camera back onto patrons and indulge in a form of audience participation that is pain-free, inclusive, friendly and unfailingly funny. The bit does cost some people their craniums, but it is worth the sacrifice.

Because all the effects are done live and in a great hurry, The Distraction is inevitably peppered with technical imperfections, providing another rich source of laughter as things don’t quite match up or work the way they’re supposed to. It’s pure blooper humour.

The show is full of ingenuity, originality, energy and dashes of conceptual daring as the lads take aim at things such as screen addiction and shifting notions of reality.

And the Friday night audience appeared to respond to every single beat.

Yet the following day, Dundas and Collins were tearing strips off the show, how it didn’t quite connect and felt “mechanical”. Telling them the show went down splendidly doesn’t seem to help.

Perhaps it’s a case of performers getting so good at what they do – they’ve been at it for 30 years and have made a huge imprint in the US – that they’ve become hyper self-critical.

It’s certainly not a case of false modesty, as becomes clear during our interview. Neither guy is actually grumpy, and Dundas appears in good spirits, though Collins is noticeably dour.

They were kind enough to take time to talk about the show specifically, and comedy in general. It’s a very honest and upfront chat.

Please excuse the few audio gonks at the beginning of the interview. They clear up once very quickly.