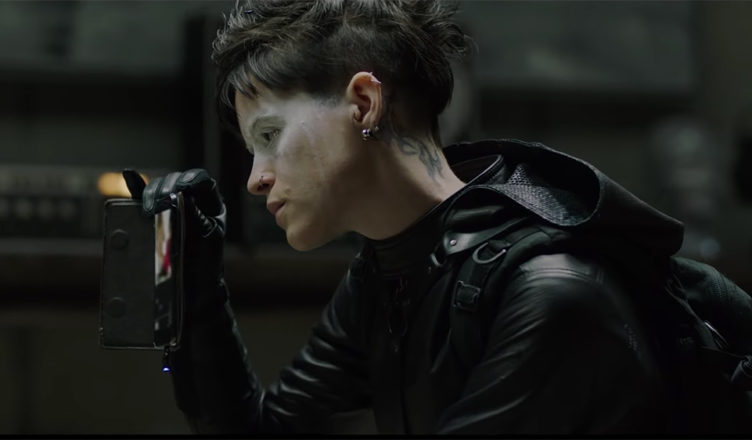 Queen no more: Claire Foy provides a hero for the #metoo generation in the otherwise ordinary The Girl in the Spider’s Web.

While everybody is keen-as-beans to hail the creation of hacker extraordinaire Lisbeth Salander as some sort of Goth feminist anti-heroine, too few seem as eager to admit that the plotting of the atmospheric mystery/thriller movies in which she features, based on the novels by Swedish author Steig Larsson, are often silly, clunky and lazy.

That’s certainly the case with The Girl in the Spider’s Web, the sequel to 2011’s The Girl with the Dragon Tattoo (an American remake of the 2009 Swedish film, though these Americanisations are hanging on to the frosty Scandinavian settings and accents).

Claire Foy, so good in First Man and best know as the Queen in The Crown TV series, takes over the ass-kicking duties as Salander from Rooney Mara. (If they keep making these films, the idea of fresh lead casting with each one is a ripper.)

Working in splendid isolation (excepting for the occasional girlfriend sleepover), Salander is contacted by computer designer genius Frans Balder (Stephen Merchant, co-creator of The Office) who fears the you-beaut military asset he’s just made for the US might be misused, so he wants her to use her hacking skills to get it back. (This is what happens when cyber geniuses don’t read their contract with the Pentagon too closely.)
–– ADVERTISEMENT ––

Alas, that mission gets derailed so she contacts her old chum, journalist Mikael Blomkvist (Sverrir Gudnason replacing Daniel Craig), who she hasn’t seen in three years.

Together, bound by a higher purpose to do good despite their world-weary cynicism, the pair hunt down the missing software via an impressive series of follow-the-clue movie cliches.

* Explosions that completely destroy the insides of a house, except for tiny, vital pieces of information that are somehow impervious to fire;

* Surveillance cameras hidden in plain sight that are somehow invisible to the police;

* Crime scene cordons that people can sneak through without being detected;

* Illegal computer downloads that will only complete a split second before the person rushing to stop it gets to the console;

* Guns fired by villains at point blank range will only inflict a superficial flesh wound that requires a few stitches and a bit of bandaging;

* Someone you thought was out of the film will pop up at a crucial plot point;

* When the plot is stuck in a corner, high-end technology will suddenly appear, like a deus ex machina, to save the day.

Not that the film is a wash out. It’s a by-the-numbers procedural, sure, but the sharply designed sets and snow-blasted locales give the film a great look. Most of all, though, Foy does a really good job as our despondent action protagonist, Swedish accent and all.

Not only does she fit the bill as a hero for the #metoo generation – the film’s opening sequence will have third-wave feminists fist-pumping the air with delight – she also has that special quality where all attempts to negate her femininity serve only to enhance it, making her all the more magnetic and enigmatic a figure.

If anything, when she’s all done up in her Goth, gender-neutral garb and is in full-on action mode, Foy’s Salander sort of resembles Kate Beckinsale’s Selene from Underworld.

Set chiefly in a shrapnel-showered frontline trench, this solid World War 1 drama, adapted from the 1928 RC Sherriff play, dutifully conveys the fear of impending slaughter felt by the prematurely aged soldiers awaiting their orders to go over the top and into a storm of artillery bursts and machine gun fire.

Much of the film, directed with a fine eye for unpleasant detail by Saul Dibb, is seen through the eyes of 2nd Lieutenant Raleigh (Asa Butterfield from Hugo), a typically enthusiastic newbie to the front who is eager to be sent to the same dug out as a school chum.

Upon arrival, however, he finds his friend deeply changed by battle and the prospects for surviving even the next few days as increasingly slim.

Paul Bettany puts in a terrific turn here as a war-weary officer, with Toby Jones adding just the right touch of absurdity as the grunt in charge of making sure all the officers feel well-fed and comfortable while bombs rain down on their position.

The period recreation is vivid, especially when the whistle blows and the men climb over the top and into a battlefield strewn with barbed wire, bomb craters and mud-soaked corpses. It’s a gruelling drama, yet a worthwhile one.

The genius touches that director Luca Guadagnino (Call Me By My Name) has apparently brought to his remake of the 1977 Dario Argento horror classic to justify blowing out the original’s running time of 95 minutes to an inordinate 152 minutes might well be the subject of deep and meaningful analysis for anyone who can survive till the end in one piece.

Most others will likely find it a posturing and pretentious bore replete with sudden shock edits to supposedly horrific images backed by strains of allegedly creepy music.

The film involves the workings of a witch’s coven in a dance studio, but the film is so dull and unscary you’ll find yourself either wishing for longer dance sequences or a fire drill.

Suspiria really is a slog to endure. Half-way through you’ll be hoping Leatherface will appear and liven things up. Stars Dakota Johnson (50 Shades) and Tilda Swinton in two roles.

A long time World War 1 buff, Peter Jackson, best known as the director of mega-hits such as The Lord of the Rings, The Hobbit and King Kong, was approached by the Imperial War Museum three years ago to do “something interesting” with their archival footage.

Without any vision in mind, Jackson wondered what the footage might look like if he deployed the might of the computing power at WETA, which has done the effects for all his films, to restoring the footage.

The results are astonishing and have resulted in the documentary They Shall Not Grow Old, which has received universal acclaim.

Nothing makes you feel more like something happened a long, long time ago than seeing it on scratchy, unstable, jerky black-and-white film.

Here, with scratches removed, damage repaired, stabilised, colourised and with computers filling in missing frames to ensure remarkable smoothness of movement, the restoration process has done a superb job annihilating the distance of time.

The footage is so vibrant, vivid and full of detail it looks as though the film was shot yesterday afternoon.

The most powerful aspect of this landmark film is the humanity that now rises from these images, like spirits released from an abyss. You see in these faces the youth, joy and fear of the men who went to the front.

Narrated by veteran soldiers – Jackson also got access to about 600 hours of BBC audio interviews made in the 1960s – the film covers the preparation, expectation, humour and horror of frontline life, whether in the trenches, behind the lines or in the thick of No Man’s Land.

Describing this killing ground between the warring trenches, one tank crewman wanly states how it was sometimes so carpeted with corpses there was no choice but to drive their lumbering 30-tonne leviathans over them, pressing the bodies ever deeper into the bomb-softened ground.

Made to commemorate the 100th anniversary of the Armistice the film is an astonishing piece of work – and more are likely to come.

Jackson and his crew were sent about 100 hours of footage by the Imperial War Museum, but they didn’t just restore the 100 minutes they needed, they restored the lot. They only colourised what they used for the film, but the unused footage now sits in the IWM archives, fully restored by state-of-the-art technology and waiting to be used.

Though there are no immediate plans to make more films, Jackson acknowledges that They Shall Not Grow Old concentrates on the ground war and that the scope is there to make films that cover the war in the air, the war in the sky (in which Jackson has a special interest) and the war on the homefront.

In any case, the future filmmakers who now have access to a rejuvenated film archive will hopefully follow the lead of this remarkable documentary, bringing yet more dimension and depth to a chapter in history that will never fade.

Judging from the reaction it has thus far received, it really feels as though They Shall Not Grow Old has hit refresh on the world’s memory of World War 1, and that it will inspire other filmmakers to do likewise.

(See our special Peter Jackson interview on this site.)

They Shall Not Grow Old screens across Australia in about 200 cinemas from Remembrance Day on Sunday, 11 November, for about a week.

The real-life story of a teenager who went through well-meaning conversion therapy through his Baptist church to “cure” him of homosexuality is sensitively directed, important, earnest and almost unrelentingly glum. Too glum, in fact.

Wisely, actor/writer Joel Edgerton, in his second directorial outing (after The Gift), has been extremely careful to avoid any didacticism or message pounding, with Nicole Kidman and Russell Crowe putting in very notable, cliche-averse performances as the God-fearing parents of Jared (Lucas Hedges), the hapless lad who is subjected to the 12-day “corrective” program by therapist Victor Sykes (Edgerton).

Adapted from the 2016 Garrard Conley book – film options are snapped up super-fast these days, thanks to Hollywood’s ferociously competitive literary agents – there’s nothing in this sedately crafted film with which any sensible, decent person would argue.

As with the book, Boy Erased is intended to elevate awareness about the spurious basis for homosexual conversion therapy and of the systemic abuse of young people at the hands of church figures in whom they have put their trust.

So, bravo. Indeed, here’s hoping the film gets as big an audience as possible. (Box Office Mojo reports that it has started strong.)

Yet much of this ground was covered in the very good recent film The Miseducation of Cameron Post, only without the dour, dramatically sour tone that permeates Boy Erased.

We are kept inside the restrictive world Jared inhabits, and while this gives us an understanding of his social circumstances you have to keep reminding yourself that the film is set in the early 2000s and that the events depicted grind against the values of a more enlightened new-century world. This is something the film should have done more effectively.

Boy Erased has received strong reviews and, as expected, has the built-in support of the LGBT community, which will no doubt help the film’s word-of-mouth.

Nonetheless, the movie struggles to lift spirits. It is also hampered, it must be said, by the dull-edged earnestness of Hedges’ performance, which has its moments, but not enough of them.