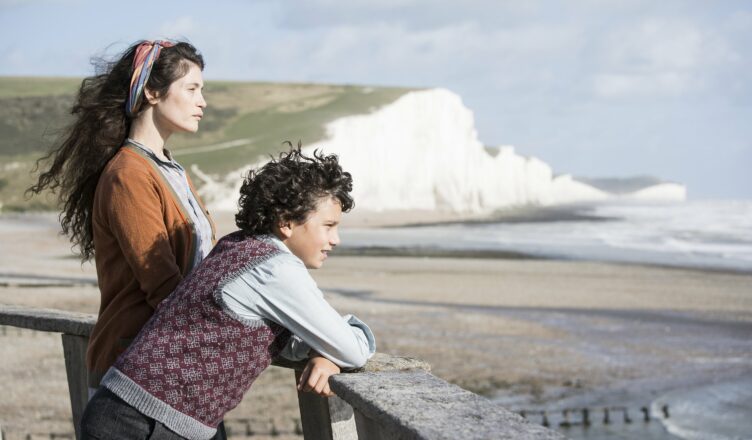 Forced together: A grumpy writer and a displaced boy find a bond in wartime England in ‘Summerland’.

SUMMERLAND *** (99 minutes) PG
The usually radiant Gemma Arterton puts in a career-topping performance as Alice Lamb, a crusty academic happily living alone with her books and sketchpad in a coastal cottage during World War II.

Comes a knock at the door and it’s the war office delivering unto her solitary existence Frank (Lucas Bond), a young lad from London sent to her for safe keeping on account of all the bombing.

Her dislike of children is already deeply set thanks to the regular harassment raids by the local kids who regard her as a witch, stuffing dirt and branches through her mail slot and so forth.

Hence the arrival of Frank is extremely unwelcome, especially given how she is deep into writing a book about local folklore. So, she reluctantly takes the scamp in on the condition that he be relocated as soon as possible so she can get back to leisurely marinating in her curmudgeonly cocoon.

Of course, no heart that begins a film that hard can remain so for long. It’s a chief principle to which any quality weepie must abide – and you can take it from Summerland they have all been studied and internalised by writer/director Jessica Swale, a noted playwright whose impressive feature debut this is.

And it’s not just Frank’s warm presence and fun attitude that thaws through Alice’s jagged exterior. His affectionate presence reminds her of a lost, forbidden love only a few years earlier when her heart was much softer and her dress sense a lot more feminine.

The picturesque film takes its title from a local phenomenon where a distant castle sometimes appears as a floating castle over the sea, as if a preview vision of Heaven. It’s a graceful motif that subtly underscores the film’s themes of loss and dreaming.

As Alice and Frank gradually bond the war inevitably steps in with bad news, sorely testing Alice’s emerging maternal instincts and how best to handle life-changing information. It’s tough for actors to capture the paralysis of indecision and Arterton does it with great conviction.

As with any weepie there is a degree of contrivance involved in the story, but what matters is how well it is fashioned.

Glad to say Swale knows how to hit the right beat at the right time, delivering a terrific revelation and a truly heartening final reel that should touch even the most cynical heart.

She deftly blends in a theme about secrecy, drawing out some decent melodrama about how hard they are to keep, when they should be kept and when they shouldn’t. It’s very nicely handled.

As well as headlining the film, Arterton also carries a producer credit on Summerland, reflecting the growing trend of actors wanting to take more creative control of the films in which they appear. More power to her.

It’s also great to see in support as a local school teacher the indefatigable British veteran Tom Courtenay, now 83, whose formidable career on stage and screen was kicked off by his brilliant performances in 1962’s The Loneliness of the Long Distance Runner and 1963’s eternal comedy classic Billy Liar.

If you’ve never seen or heard of them, you know what to do. Billy Liar, in particular, is just so good and stands up splendidly some 58 years on.