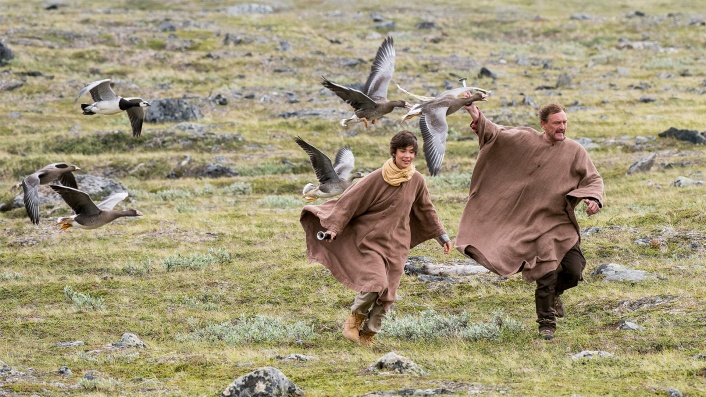 The geese are flying: A father and son bond while saving a species of geese in ‘Spread Your Wings’.

SPREAD YOUR WINGS (DONNE MOI DES AILES ) *** (113 minutes; subtitled) PG
Starring what appear to be a cast of actual geese, Spread Your Wings is an enjoyable enviro-friendly, fact-based family film from France about has-been scientist Christian (Jean-Paul Rouve) who gets his estranged son Thomas (Louis Vazquez) involved in a scheme to save a species of geese from extinction.

With their migration path disrupted by industrial structures, light pollution, hunters and air traffic, Christian plans to employ imprinting techniques so that his gaggle of endangered baby geese will grow up thinking he and Thomas are their parents.

They will then take to the air in ultra-light aircraft with the grown geese in train and so teach them a new migration route across Europe.

Despite what you might expect, there doesn’t appear to be much digital assist in the film as the geese first waddle about as cute goslings before taking flight in some stunningly beautiful aerial sequences that take up much of the film’s second half.

With one eye firmly fixed on the scenic splendour of the adventure – man, the fjords of Norway look every bit as good as they sound – director Nicolas Vanier (Belle & Sebastian) wisely keeps the airborne story dramatically grounded.

The project offers Christian an opportunity to reconnect with his son, who spends most of his time gaming and is distressed at the lack of wifi in the country. wrestles over his relationship status with ex-wife Paola (Mélanie Doutey) and also has to face the consequences of side-stepping protocol after ticking off some very reasonable officials. Kudos to Vanier for not resorting to stereotypes here.

Still, the birds are the real stars, embodying the film’s unforced message that the support required to save an entire species can be quite modest, provided there is will enough to actually care. And, just to be clear, the geese in the film are real. No CGI or digital magic involved.

The film does bear some resemblance to the excellent 1996 film Fly Away Home directed by Carroll Ballard (The Black Stallion; Never Cry Wolf), starring Jeff Daniels, Dana Delany and a very young, post-Piano Anna Paquin as the film’s feisty hero. The film’s brilliant, Oscar-nominated cinematography was by veteran Caleb Deschanel.

Check it out. Like Spread Your Wings, Fly Away Home is terrific, visually lush family entertainment.