In a virtually plot-free frolic, a militarized Milla and her team of mission specialists accidentally punch through a hole in the space-time continuum while on duty in the desert and encounter a world populated by large angry monsters and Ron Perlman.

Looking fabulous and mean and mighty unclean, Milla does war with the beasts in a lovely, noisy, VFX-crammed time-killing entertainment that reminds us, at a time when there’s so much bleating about the need for strong female action leads, that Milla Jovovich has been working that side of the street since 2002.

That was the keynote year she kicked off the hugely successful six-film Resident Evil franchise, which knocked out a new fan-pleasing entry every two years (now that’s how to run a franchise!). It ran parallel with the Underworld films with Kate Beckinsale, another ass-kicking femme. These women built the audiences that made Wonder Woman possible, yet they probably don’t even get a Christmas card.

As with Resident Evil, Monster Hunter is spawned from a video game, is written and efficiently directed by Milla’s producer-partner/husband Paul W. S. Anderson and is designed as a franchise starter.

Not sure if it will go the same distance, but one thing we’ll never tire of is the glorious vision of Milla Jovovich taking care of business with the help of a determined grimace and a Gatling-style six-barrel rotary machine gun. 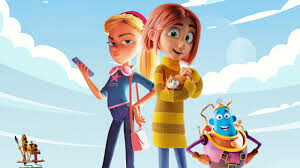 DREAMBUILDERS ** (81 minutes) PG
Anyone who has seen Pixar’s Inside Out is going to notice an uncomfortably large raft of similarities with Dreambuilders, a Danish animated film, dubbed into English.

The story involves Minna, a 12-year-old girl who discovers while dreaming the Minion-like creatures who construct, direct and perform the dreams people have on special individualized stages.

She learns that she can alter people’s behaviour through their dreams and uses this power to try and make her social media-addicted step-sister, Jenny, more amiable.

Apart from a few surreal images conjured during Minna’s meta-dreaming the animation is mostly ordinary and predictable, matching the story perfectly. Not even the giant spider is all that scary.

Oh, it’s passable, innocuous fluff for the undemanding holiday movie-goer, with a nice story about a father trying to build a new family and a congenial message about how important it is not to change somebody’s behaviour by invading their consciousness and manipulating their perception of reality to accord with your own will. Admittedly, not too many kids’ films deal with that.

Side note: the portrayal of teenagers being slaves to their devices is getting old fast. Sure, it reflects an annoying 21st-century reality, but here’s hoping it doesn’t become even more a cliche than it already is.