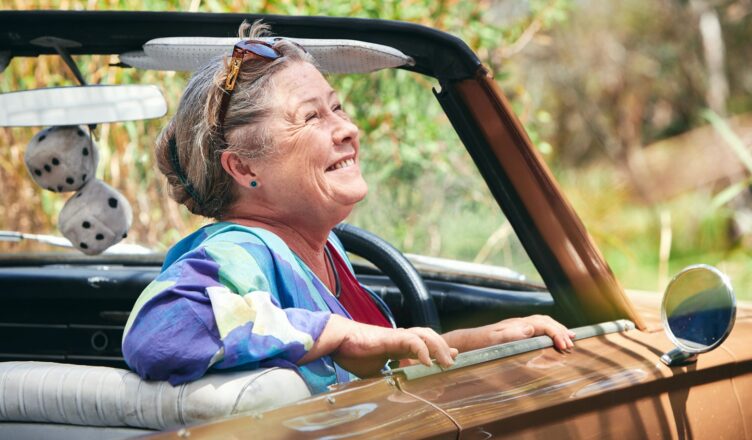 JUNE AGAIN *** (99 minutes) M
Given how dementia has been at the centre of so many fine films recently, it is perhaps inevitable that they would, to varying degrees, share common themes regarding changing personalities, memory loss, the impact on families, love and hope.

All those things can certainly be found in the uplifting, heartfelt, warm, if wobbly, Australian comedy-drama June Again.

What distinguishes the film is its wonderfully novel premise.

The time that the elderly June (Noni Hazlehurst) has spent in a nursing home because of her condition is coming up to five years. Things appear to be getting worse, but she has a burst of lucidity that allows her to be her old self.

Knowing that her deteriorating mind will only be in this refreshed state for a very limited time, she decides to make the best of it – by breaking out of the home and reconnecting with her family.

June’s hopes for seeing how much their lives have improved are doused once she sees the domestic realities her son Devon (Stephen Curry) and daughter Ginny (Claudia Karvan) now endure.

It’s a train wreck of broken marriages, deceit, estrangement and emotional discord. On top of all that, the wallpaper business in which June took so much pride has undergone a change of management that leaves her distraught, and a little bit vengeful.

There’s some really strong dialogue exchanges here as June confronts what has happened; she also has a personal quest regarding the re-acquisition of an old dresser before her mind begins shutting down again. A fine, affecting performance from Hazlehurst reminds us of her formidable film legacy, stretching back to the 1980s and her award-winning turns in Monkey Grip and the moving, largely forgotten Fran.

For a debut effort, writer/director JJ Winlove has a remarkable sureness of touch when the film has both feet planted in reality. The performances, especially from Hazlehurst, are strong and the dramatic tone is finely geared to the emotional stakes of June’s journey.

Where the narrative’s wheels get wobbly are in the scenes offering respite and comedy relief to what is an essentially tragic circumstance.

The tonal shifts are awkward, often clumsy and make these scenes appear as though they belong in a different movie. We also see the characters do things that appear distinctly out-of-character.

One especially jarring scene involves June’s confrontation with her company’s new manager, who appears to have dropped in from a 1970s Alvin Purple film. If only this low-budget film had the money for a reshoot.

Ironically, had the straight scenes in the film been subject to mediocre direction, the lighter segments would not have stuck out so prominently.

Still, overall the film does hang together and, most importantly, steels itself sufficiently to deliver a very emotionally gratifying finale.

Footnote 1: It is wholly unfortunate that COVID delayed the release of June Again by a year, allowing the acclaimed, Oscar-winning dementia drama The Father to come out first.

In The Father director Florian Zeller uses a clever device to convey the confusion and disorientation that dementia can cause.

Winlove deploys the same device with similar effect in June Again, but did it a year earlier. So credit where credit is due. This little Australian film did it first.

Footnote 2: Rating films in a review can sometimes be tough. In the case of June Again there was a push-pull between the film’s virtues and its flaws.

Of course, “flaws” are usually registered by a reviewer in the rarefied circumstance of a preview screening, often with few others – sometimes nobody – in the theatrette.

In an ideal world films would be previewed to journalists in a large theatre packed with that film’s intended audience. That way what a lone reviewer might regard as a “flaw” might play differently to a crowd.

Previewing a Harry Potter or an Adam Sandler film in such a way, for instance, gives you a far better idea of how, or if, the film is working as intended. Certainly in the case of an Adam Sandler comedy, moments that a critic might otherwise deem as low-brow or cheap or off-colour could have 700 people in stitches.

In the case of June Again it would have been fairer to preview the film with a houseful of its target demo, which is elderly folk. What a critic might fault, an audience might enjoy and it’s quite possible those scenes that seemed to be off-key might work.

So, the rating for June Again admittedly gives the movie some benefit of the doubt, and also credits how, all flaws aside, the story ultimately pays off – and that’s always the mark of a worthwhile film.

Writer/director JJ Winlove was kind enough to carve out some time from his busy schedule and fire up his Skype software to talk about the film, the ideas behind it and what it was like going from short films to a feature.

He also faces The Schembri Challenge.