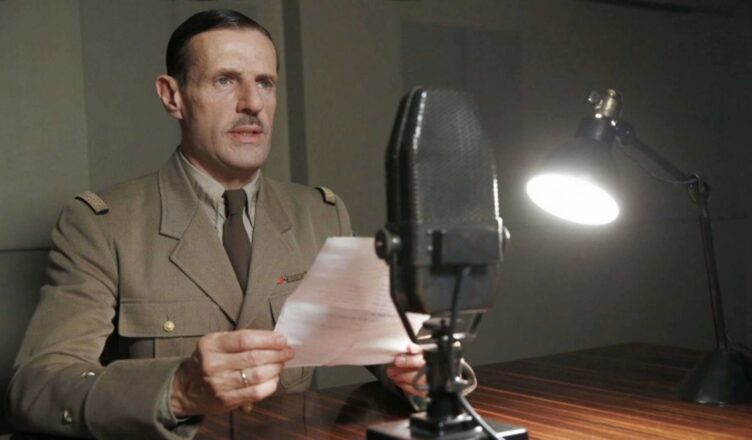 DE GAULLE *1/2 (109 minutes; subtitled) M
Whatever other faults the French might have one thing we must admire them for is the infatuation they have with their own history, and making movies about it.

Sometimes that infatuation is of interest to people everywhere, as was the case with Abel Gance’s 1927 epic Napoleon, a masterpiece by any measure.

And sometimes that infatuation seems designed purely for domestic consumption, which seems to be the case with the boring biopic De Gaulle from writer/director Gabriel Le Bomin.

The film is set during that special period early in World War 2 when the Germans were hammering down so quickly and efficiently on the out-trained, out-maneuvered and out-gunned French forces that the crumbling government could barely decide which end was up.

Some figures, such as General Charles de Gaulle, saw the nation’s pride was at stake and argued that France hold fast for the sake of national dignity. Others thought that negotiating with Hitler and jumping on to his party train was a good way to preserve property values, as well as their own skins.

While de Gaulle (Lambert Wilson) is embroiled in all this negotiating we see his dear wife Yvonne (Isabelle Carré) and their Down syndrome-afflicted daughter Anne (Clémence Hitten) stumbling through rubble trying to keep one step ahead of the relentlessly advancing Germans.

There’s not much action in the film but there is a great deal of yapping, which essentially reduces the experience of watching De Gaulle to two hours of subtitle reading.

In the end, all the film does is show how the heroic de Gaulle kept his fellow countrymen and women going with a key speech he delivered to them via the BBC in London.

Those words inspired the French Resistance to rise and organize, ultimately playing a key role in the 1944 D-Day landings that ultimately liberated France both from German occupation and from the French cowards who were happy to sell out their citizens and dance to Hitler’s tune.

For all the historical import of the events in the film, director Le Bomin just can’t pump any oxygen into the proceedings, leaving the film to unwind as an elongated and rather boring talkfest.