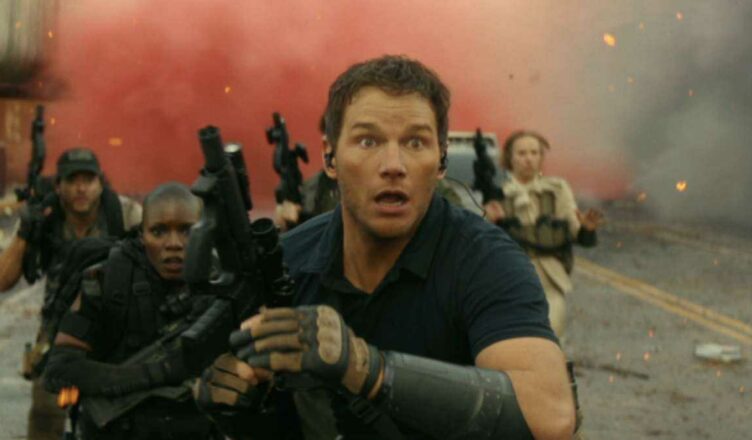 Chris Pratt (who also served as executive producer) plays science teacher Dan Forester, an Iraq War vet who is sent to the future with other conscripted civilians to engage in loads of bloody street fighting with a species of ferocious, oddly beautiful alabaster critters that look like the offspring of the Cloverfield monster.

The flesh-tearing spectacle as machine gun muzzle flashes confront giant jaws are familiar from such us-versus-them films as Aliens and Battle: Los Angeles and are here staged on a truly awesome scale, with the sequence occurring at a gigantic naval fortress proving especially impressive.

Make the mistake of thinking too deeply about the story and you’ll discover – surprise, surprise – that the proceedings don’t really make much sense, especially with all the time travel stuff, which actually makes no sense at all despite some valiant attempts by the characters to explain how it all supposedly works.

The Tomorrow War is straight-up cheeseburger cinema, another example of a B-movie with A-grade production values.

Directed by Chris McKay, who gave us The Lego Batman Movie and plenty of Robot Chicken, it’s all about pace and splashy visual effects, ably held together by some serviceable emotional threads involving Forester’s relationship with his daughter (Yvonne Strahovski) and estranged father (JK Simmons).

Neatly divided into three acts, the film justifies its generous running time and probably plays out better at home than it might have in the cinemas, where it was originally intended.

As has been widely reported, CV-19 hobbled the film’s plans for a theatrical release, prompting Paramount to sell it for a juicy $US200 million to Amazon Prime, where it is presently going gangbusters.

It’s the latest indication of how the movie market is changing, as big films secure much-needed exposure in the stream, their lucrative cinema runs having been either limited or denied by Covid.

What’s happening now sets the stage for a movie world where films will be primarily designed and budgeted for the stream in the hope of replicating the huge dollars a global cinema release once promised.