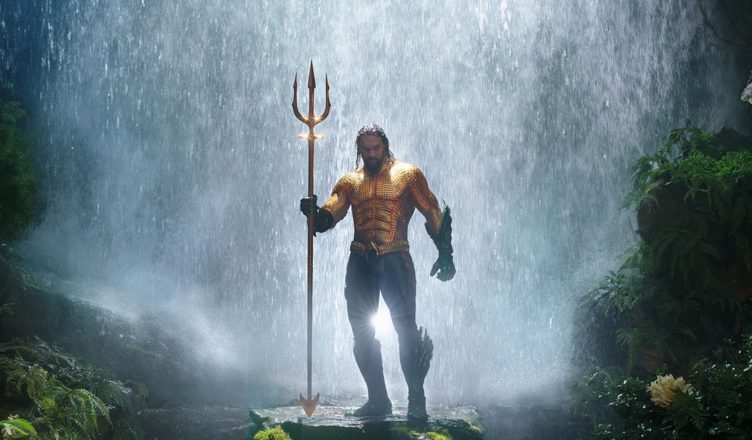 May the Fork Be With You: the new ‘Aquaman’ hits all the right spots with great action scenes, good story and a charismatic lead performance by Jason Momoa.

Of all the superheroes with household-name status, Aquaman has long been the one in need of the biggest movie makeover. Confined to his dominion of the sea, dressed in a lame outfit and looking like a librarian, his superpowers consisted of being able to breath underwater and telepathically communicating with fish.

Though an official member of the Justice League, he never really cut it with those who could lift locomotives, spin webs or fly, and TV shows such as Family Guy, South Park and even Spongebob Squarepants have had fun poking at Aquaman’s comparative impotence as a superhero.

In stark contrast to so many recent superhero films, Aquaman hits as a refreshing, fast-moving, visually inventive adventure that actually has some heart at the heart of all the epic battle scenes and elegant creature design. There’s an eminently likeable lead in Jason Momoa and though Aquaman honours superhero movie conventions it largely avoids that stale formulaic feel we’re too often forced to endure.

Aquaman recasts the underwater hero as the buffed-out bastard son of two conflicting worlds, the land and the sea, after the queen of Atlantis (Nicole Kidman) and a lonely lighthouse keeper (Temuera Morrison) meet up one stormy night and have a child.

Built like a bunker and covered in tatts, with a biker’s beard and a love for beer, our new-fashioned Aquaman, aka Arthur Curry (Jason Momoa) is a no-nonsense chap who is reluctantly pulled into the impending conflict between the combined forces of technologically advanced ocean-dwellers and unsuspecting land lubbers.

Without pushing any overbearing green message, the film argues that those living underwater have had enough of the pollution and abuse dumped upon them by humankind.

So vengeance strikes in the form of huge tsunamis – splendidly rendered as slow-moving mountains of cascading ocean – that send warships and billions of tonnes of plastic garbage back to the beaches. But it’s only a first strike.

Leading the charge is the Ocean Master (Patrick Wilson), the younger half-brother of Arthur. Forcing the other kindgoms of the ocean to ally with him, he intends destroying humanity, or at least give it a good drenching.

Summoned by Nera (Amber Heard), a protege of Arthur’s mum, Aqauman embarks on a fairly standard superhero origin journey where he confronts his inner demons, discovers who he truly is and faces the responsibilities that come with his power.

Director James Wan, an Australian who hit big in Hollywood with the Conjuring movies and Fast & Furious 7 after kick-starting the hugely lucrative Saw franchine with Leigh Whannell, does an outstanding job here.

The action sequences, many of which occur above the shore line, have a distinct look and inventive character missing from so many recent big films. One segment, for instance, follows two chases at the same time, often with the one camera shot sweeping between them. It’s marvellous stuff.

Also impressive is how proficiently the underwater universe is created through eye-nourishing, flourescently lit vistas that show a world that has developed independently of humans. In terms of setting up a space for future films it’s a lot of heavy lifting taken care of with a few efficient scenes, many of which feature truly beautiful design work, a quality also absent from some recent big films.

Still, for all this, none of it would have worked without a central character for people to really connect with, and in that regard the largely unknown Jason Momoa arguably puts in the best first-film performance as a superhero since the new century began.

His physical power aside, the new Aquaman sells as a cheeky, amiable bloke who, in one scene, shows how he’s the first superhero people can comfortably have a beer with. He’s certainly the direct opposite of the titular character Momoa played in the disastrous 2011 flop Conan the Barbarian, an action figure who suffered from having no personality at all.

The film has already proved a monster hit in China before its release into other major territories, including the US. This not only ensures more Aquaman films but bodes well for the DC superhero franchise.

Its films have stumbled compared to Marvel, which presently dominates the scene with about 20 blockbuster films, some of which were actually watchable.

Apart from the Dark Knight films, DC has struggled with average product such as Green Lantern and Superman vs Batman, the latter being one of the most widely reviled films in recent memory. Wonder Woman then hit big, and Aquaman will likely secure DC’s hold on prolonged audience engagement.

All they have to do is avoid sequelitis and keep things as fresh, fun and grand as they have here.

The latest Transformers film is snazzy, sprightly, fun origin story that tells us of how the Autobot Bumblebee came to be on Earth in 1987.

After fleeing his doomed home planet with the mission of setting up a new base for the Autobots, he takes shape as a VW beetle – a tribute to Herbie: The Love Bug here, surely – and connects with Charlie (Hailee Steinfeld), a young girl in need of a friend.

Though free of the hyper-kinetic shooting style of Transformers maestro Michael Bay, the film is spiced by similarly fluid direction by Travis Knight (CEO and producer at Laika animation, maker of Boxtrolls, Paranorman and Caroline). He maintains the high visual standard of the Transformer franchise while clearly aiming at a younger demographic with a story that bears several Disneyesque touches.

A treat for older viewers can be found in Charlie’s mother who is played with comic verve by Pamela Adlon, best known for her work on the Louis CK shows Lucky Louie and Louie. John Cena also stars as the mandatory military man.

Given how similar the film is to the other Transformer movies, it is interesting how much more positively Bumblebee had been reviewed. It’s not as over-the-top nor as loud, but it is in keeping with the franchise. Why does a Transformers film suddenly find such favour? Could it be a critical allergy to Michael Bay’s name? Who knows?

As the feisty embodiment of pre-feminist defiance Keira Knightly puts in a terrific, tightly wound performance as Colette, the French writer whose popular prose was released under the name “Willy”, a pseudonym of her famous lair of a husband Henry Gauthier-Villars (well-played by Dominic West). Director Wash Westmoreland also made Still Alice with Julianne Moore, and his affinity with female characters is again on full show, as is the recreation of Bohemian Paris of the late 1800s. A satisfying, handsomely mounted historical drama.

Thunderously dull romantic drama from Paweł Pawlikowski, who won a best foreign film Oscar for 2015’s Ida. The film tracks the political effect on the relationship between Zula Lichon (Joanna Kulig) and Wiktor Warski (Tomasz Kot) as they head from Communist Poland to France in the post-war period. The film is being acclaimed left, right and centre and will probably get another Oscar nomination, but, gosh, it’s a slog, as well as featuring characters who are hard enough to relate to without Pawlikowski’s sterile direction.

Unrecognisable under some brilliant makeup, Christian Bale channels the light-hearted, darkly pragmatic and wholly opportunistic soul of Dick Cheney, vice president of the US from 2001-2009, most famous for his power-broking under George W. Bush during the post-9/11 invasion of Iraq, which proved a boon for his company Halliburton.

There’s not much more to this film than people talking in rooms, but as with Big Short it’s the conviction of the performances that compel you to hang on to almost every word as Cheney and his co-horts, including W (played splendidly captured vacancy by Sam Rockwell), scheme, negotiate and wiggle their way through wars and world events.

Taking another laudable step into drama, Steve Carell plays Donald Rumsfeld and Amy Adams plays Mrs Cheney, a woman who had more to cope with than the world gives her credit for, it seems.

With powerhouse acting from go-to-whoa, all pinned to Bale’s Oscar-worthy turn, the film is the perfect antidote to those whose eyes might have grown a bit weary from all the expensive eye-candy being tossed at us and who are hungry for a movie meal with real meat. On that score Vice certainly provides plenty to chew on.

So what, pray, is there left that could make Spider-man: Into the Spider-verse worth watching?

Plenty, as it turns out.

For starters, the traditional Spider-man story – myth, really – has here been recast with an African-American lead, something the franchise arguably should have done after the first trilogy.

Standing in for Peter Parker is Miles Moralis (Shameik Moore), a private school kid under pressure from his cop dad to stop messing around with graffiti art doodles and concentrate on his education.

While on a jaunt with his rebellious uncle Aaron (Mahershala Ali) to spray paint an underground wall, that iconic thing happens when radioactive spider meets school boy and things start to change as Miles discovers his ability to climb walls, and so forth.

So far, so so. Then the big twist to the story hits with the introduction of a giant subterranean generator that opens portals to the multi-verse (alternate versions of reality, for those who have seriously never watched Star Trek or Family Guy.)

Through said portal Miles is joined by other versions of Spider-man from other worlds, including Spider-Gwen (Hailee Steinfeld), a noir Spider-man (Nicholas Cage), a pig version called Spider-Ham (John Mulaney) and an anime robot piloted by a teenage girl (Kimiko Glenn). And, of course, there’s the original Spider-man, aka Peter Parker (Jake Johnson). Their adversaries are the controllers of the multi-verse generator, the hunchbacked heavy Kingpin (Liev Schreiber) and the multi-limbed Olivia Octavius (Kathryn Hahn).

It’s a full-on, fun adventure, all ignited by the film’s rhapsodic animation, a dazzling collision of traditional comic-book style images and digital wizardry that give the film the warm feel of the pulpy medium from which the superhero genre sprang from.

Unlike so many other films in the genre, this Spider-man is actually beautiful to look at especially when the dimensions begin colliding in the film’s elongated finale. Don’t expect the sheen and precision you typically see in a digital animation; the images here have a vivid, vibrant texture all their own that apparently involved developing new techniques with hundreds of digital artists.

And it’s a credit to the directors – Bob Persichetti; Peter Ramsey; Rodney Rothman, working from a story by Phil Lord (Lego Movie) – that they’ve made such an abstract premise so easy to understand.

Propelling it all is the value that runs through all the Spider-man films, that even superheroes need help and can spring from the most surprising places.

From the director of Taken comes another piece of straight-faced, high-voltage vigilante pulp, only this time with a woman in the lead. A very well-cast Jennifer Garner (Alias) is Riley North, a loving wife and mother who goes on the rampage to avenge the murder of her husband and child.

Director Pierre Morel shows his proficiency with morally-justified violence as Riley goes blasting and slicing her way through the bad guys, her stony face less a tribute to Liam Neeson than it is to the late Charles Bronson, who really owned this sub-genre of action film with classics such as Death Wish (1974), a clear inspiration for Peppermint.