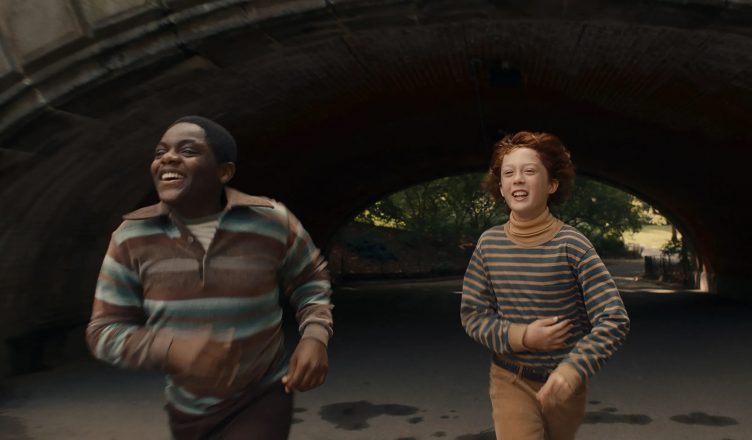 Pals for now: The world gets between two buddies in the period drama ‘Armageddon Time’.

ARMAGEDDON TIME ***1/2 (114 minutes) M
Full of wonderfully nuanced performances and sprinkled with unforced social observations about why the world is in the state it is now, Armageddon Time is a poignant, carefully understated biographical drama from writer/director James Gray (Ad Astra; The Lost City of Z).

Based largely on his experiences growing up in a Jewish family in New York in the early 1980s at the onset of the conservative Reagan Era, the film follows the bumpy journey of Paul Graff (Michael Banks Repeta), whose life at home with mum (Anne Hathaway), dad (Jeremy Strong, in a bitter-sweet portrayal) and grandfather (Anthony Hopkins, great as usual) and at school with African-American bestie Johnny (Jaylin Webb) delivers some hard lessons in life. As his wise, working-class father tells him it’s not fair, and inequities mudst be accepted rather than fought.

Through Paul’s close but increasingly strained friendship with Johnny we see how the seeds of prejudice are sewn and propagated.

Favoured treatment keeps Paul from ruining his life through petty theft, while Johnny’s situation is disregarded. His marginalization and abandonment by the system to face a bleak future is merely seen as the fate for which he was destined by his class and his race.

Gray’s non-sensational, richly subtle approach to these themes of discrimination, class prejudice and racial bigotry proves how issues can be better addressed and more powerfully conveyed with whispers rather than shouts.

Yes, the film has wry political hues: the ascent of Reagan is seen as the beginning of the end of the world; the power figures supporting Paul’s school are relatives of the young Donald Trump, including his father Fred (John Diehl).

Still, that these were the seeds responsible for the social division and conservative stridency we see today are suggested rather than hammered. For instance, the speech given to students by Trump’s sister Maryanne (Jessica Chastain) sounds neither ominous nor foreboding.

The legacy of the Holocaust still rings loudly in Paul’s family as he is cautioned about the anti-Semitism embedded into the society he is becoming part of. It’s a sound point, that hatred is a continuum with a long history. It doesn’t just start.

Due no doubt to Armageddon Time being his most personal film, Gray hits a career peak with the quality of his direction, both in the top-notch performances from the terrific cast and in the unhurried pacing as the drama unwinds.

The chief beneficiary of this is the fraying of Paul’s friendship with Johnny. You feel the distance between them growing until they are literally on opposite sides of a fence, an incidental yet well-placed metaphor that defines who shall have a place and who shall be left to fend for themselves in a system already geared against them.

Without the stridency or the bells and whistles you’d normally expect with the kind of story being told here, Armageddon Time is an exceptionally well-disposed period drama with a raft of rich performances and some well-made points that don’t require the thumping of a tub.

The ferocity and scale of the fires remain gob-smacking no matter how many times you see the images – walls of flame advancing at speed; forests alight; tornadoes of fire; dreaded swirls of red-hot embers; exploding homes; and, arguably most frightening of all, that guttural sound of giant blazes that are out-of-control.

As we see how brilliantly communities came together to deal with the calamity, the film highlights how that collective compassion from everyday citizens was in dire contrast to the workings of officialdom, which had long neglected warnings about the likelihood of a horror fire season.

Unsurprisingly, special attention is reserved for the action – or, rather, the inaction – of former Prime Minister Scott Morrison who went on a family holiday to Hawaii while Australia burned, a decision now immortalized by the infamy it deserves.

Amidst the smouldering wreckage we witness the fury of fire victims and fighters as they rail against government indolence and bureaucracy. In particular, the film is eager to highlight the $2 billion phantom fund that was meant to help with the aftermath, but which never materialized. vanished. Fans of Yes, Minister will recognize this cynical tactic of announcing something that sounds good without the need to follow through.

The clips of people refusing to shake Morrison’s hand, along with a lot of other footage, have been seen before in other fine documentaries about the fires. Here, though, many clips are played at length, uninterrupted by narration or talking heads.

Fire Front harks from director Eddie Martin, who has proved himself one of Australian’s premiere documentary filmmakers with such excellent works as All This Mayhem, Have You Seen the Listers? and Lionel.

The film does bear some similarities with Eva Orner’s excellent Prime documentary Burning, which stressed the effects of climate change on bushfires and went very hard on the government’s infuriating stumblebum approach in dealing with the catastrophe.

The chief difference is that while Burning incorporated interviews, commentary and narration, Fire Front takes a more impressionistic approach, allowing the images and the participants to speak for themselves.

The film also serves as a testament to the power of citizen journalism as people – trapped on roads, in houses and inside vehicles by billowing pillars of flame – risked their lives to record the intensity and merciless indifference of the fires.