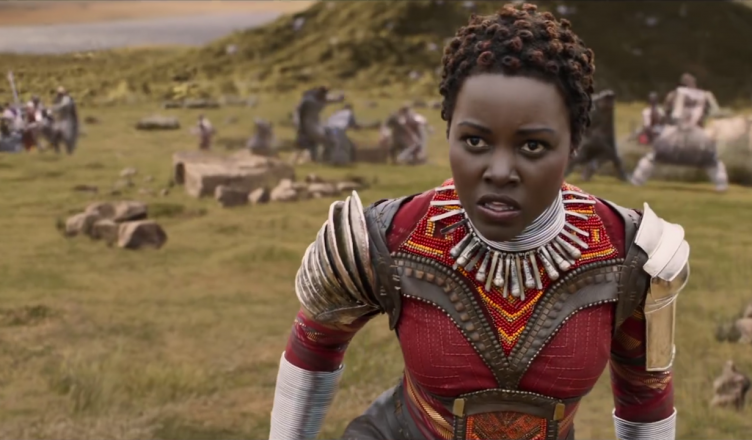 Rising to the task: Lupita Nyong’o as Nakia in ‘Black Panther: Wakanda Forever’.

The big upshift here that lodges Wakanda Forever as a top-tier Marvel movie is that the soiree sports a super-strong story that neatly balances way above-average action sequences with a great human story containing real emotion – another thing you don’t often get in a Marvel comic-book movie.

The film, again directed by Ryan Coogler (Creed), sensitively factors in the passing of super-powered King T’Challa after the tragic and immensely sad passing of the extraordinarily talented Chadwick Boseman.

The opening Marvel logo segment serves as a moving mini-tribute to Boseman who succumbed to colon cancer in August 2020, age 43. The film is dedicated to him. (And if you haven’t seen Boseman’s brilliant portrayal of James Brown in the 2014 film Get On Up, please check it out on Prime. It’s the best $4 you’ll spend this year.)

Igniting this adventure is the deep-sea discovery by America of Vibranium, which everybody who knows their Marvel lore knows, is the all-powerful metallic mineral that makes the peace-loving Wakanda the most formidable nation on Earth and which, up until now anyway, Wakanda had exclusive access to.

It’s not just the Wakandans who are concerned. Complicating matters no end is a race of very aggressive Na’vi-blue warriors who live under the sea – presumably without crossing paths with franchise rival Aquaman – in a beautifully designed city called Talokan, ruled by the King Namor (Tenoch Huerta) who can fly, not due to a super-power but thanks to these super-cute little angel wings he has on his ankles.

Dealing with these warriors as well as trying to control the access by humans to Vibranium, T’Challa’s sister, technology expert Shuri (Letitia Wright), and ex-pat Wakandan Nakia (Lupita Nyong’o) must team up and rise to the pressing demands of defending their previously impervious home from a foe that might just have an edge over them.

Given how emotionally numbing much of the mulch stamped out by the Marvel Studios machine can be – and that’s not a putdown, necessarily – Wakanda Forever chimes in as a refreshingly stylish, finely honed and touching entry into the MCU, which is otherwise cluttered with hyper-active, cartoony time killers.

Your eyes and ears will give thanks that the film’s top-shelf action sequences are nowhere near as chaotic, visually jagged or frenetically edited as we now expect from any superhero spectacle.

In particular, there’s a large-scale sea battle that, like the set-pieces of old, has true grandeur and a real sense of tension. In terms of big-screen eye poppers, it’s inspired stuff.

Yet Coogler – who devised the story and co-wrote the film with his Black Panther collaborator Joe Robert Cole – maintains sustained focus on the chief characters, dialling up their vulnerability, making them a lot more engaging in a terrific story that where the stakes are high and, even amidst all the fantasy, death is a real threat. Wakana Forever actually feels like a Marvel film designed for grown-ups. Makes you glad you lived this long.

Perhaps the best testament to the film is that you won’t feel the 161-minute running time – provided, of course, that you hit the head before heading in.

Footnote: As luck would have it, the media preview was preceded by the trailer for James Cameron’s much-anticipated Avatar: The Way of Water. So, when the underwater warriors in Wakanda Forever pop up in the same shade of blue, it’s hard not to note the similarity.

Other visual cues in Wakanda to other films include the aforementioned Aquaman, Ironman (especially the close-up face shots inside the high-tech helmets of flying suits) and – what was the other one? – oh, yeah, Bat Girl and Catwoman. The Batman Catwoman, not the Halle Berry one, which we are still trying to erase from our minds.

RESURRECTION **** (104 minutes) MA
At the racing heart of this compelling psychological drama is the remarkable central performance by Rebecca Hall (Vicky Christina Barcelona; Frost/Nixon). She’s never inhabited a character with such intensity.

In a prime example of a highly photogenic actor de-glamming themselves, Hall plays Margaret, a drawn and emaciated office manager and single mother who is either on the verge of a nervous breakdown, or deep inside one.

While trying to cope with her trying daughter Abbie (Grace Kaufman), who apparently can’t wait to leave her home-life for college, Margaret’s traumatic past comes visiting her in the form of David (Tim Roth, putting in another terrific turn in an indie film).

Whether David is a real person or a figment of Margaret’s disrupted psychological state – or possibly both – is a matter writer/director Andrew Semans refuses to resolve, a move that dials up the deliberately discordant tone of the exchanges between him and Margaret.

This produces some very strange dialogue exchanges that sound like Margaret is experiencing a waking nightmare, further deepening the mystery of what happened between them, and what will happen to her.

Anchored by Hall’s extraordinary portrayal of a frail woman living in fear of losing it – with hints that she might already have lost it – Resurrection is a prime psychological drama that delves into the disturbed corners of a damaged psyche.