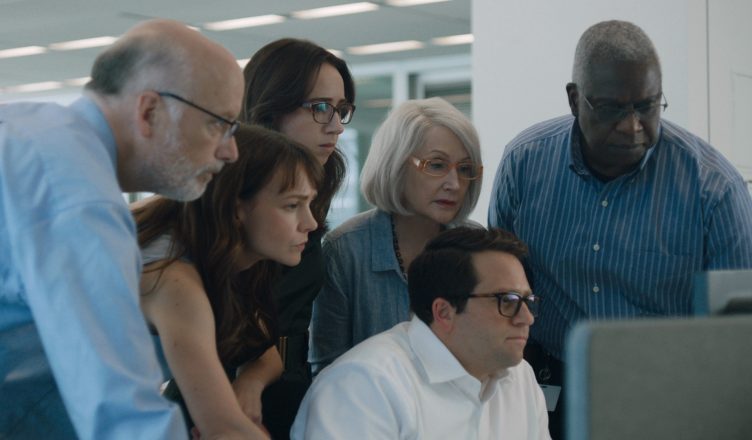 SHE SAID ***1/2 (127 minutes) M
Without the histrionics you might otherwise expect given its hot-button #metoo credentials, She Said dispatches a very good, engaging factual drama about an important topic as New York Times reporters Megan Twohey (Carey Mulligan) and Jodi Kantor (Zoe Kazan) dig into the allegations of long-term sexual misconduct by film producer Harvey Weinstein.

While the story itself is not exactly compelling given how familiar the broad strokes of it are due to saturation media coverage, the film keeps you hooked as it colours in the unpalatable details of the depth and depravity of Weinstein’s crimes.

The engaging procedural nature in which the investigation unfolds reflects the very measured direction by Maria Schrader (the excellent 2020 Netflix series Unorthodox) who thankfully keeps the film from feeling like a #metoo lecture.

The film is as much about the difficulties investigative reporters face in satisfying the high verification standards set by high-quality mainstream editors. (In that regard, the film could also be considered a work of nostalgia. If only that was a joke.)

It’s a theme common to good films about good journalism such as: 2015’s Spotlight (Oscars for Best Film and Original Screenplay); Ron Howard’s 1992 film The Paper (no Oscars but probably the best film about the realities of print journalism); and, of course, the 1976 Alan J Pakula classic All the President’s Men (Oscars for Best Supporting Actor Jason Robards, Adapted Screenplay by William Goldman, art direction and sound.)

Carey Mulligan & Zoe Kazan are very impressive in largely understated, methodical performances and there’s a sharp cameo by Ashley Judd, an actress whose burgeoning career was curtailed by Weinstein after she said no to his advances.

Based on the book She Said: Breaking the Sexual Harassment Story That Helped Ignite a Movement by Kantor and Twohey, and written by Rebecca Lenkiewicz, the film is brutally open about the nitty-gritty details about non-disclosure agreements, settlement pay-outs, the difficulty in getting people to speak on the record and – very sobering – how early alarms about the sexual harassment situation were dismissed and ignored, a frustration given voice by the voice of actress Rose McGowan, who originated the now-famous #metoo hashtag.

No doubt because of the film’s story focus, mentions of Ronan Farrow and his equally important parallel Weinstein investigation in She Said are unavoidably awkward. He had to take his Weinstein story from NBC to the New Yorker magazine, where it was published, with huge subsequent publicity, just three days after the New York Times expose. Perhaps Catch and Kill: Lies, Spies, and a Conspiracy to Protect Predators , his 2019 book about the media culture that enabled people such as Weinstein will inspire a film, just as it has a podcast.

As with 2019’s The Assistant, another excellent #metoo film, Weinstein is kept at arm’s length from the narrative in She Said. We hear him at the other end of phone calls, on tape, and see him only from a distance, and always from behind.

What is really needed now is a front-on, soup-to-nuts, balls-to-the-wall film about the Weinstein saga from his perspective. He’d be front-and-centre as the main character, doing and saying all those weird, gross things in a confronting film exploring just what was going on in his head.

It’d make for a rich character study. Respected and feared, Weinstein remains one of the most innovative, creative and successful film producers of the modern era (Pulp Fiction; Shakespeare in Love; The English Patient, etc).

At the same time his name has become synonymous with the abuse of women and the abuse of power. To adapt the old joke: look up the word sleazebag in the dictionary and there’s his picture.

We’ve already had the film Bombshell and the series The Loudest Voice, two very good dramatizations about Fox News chief Roger Ailes, who was widely accused of sexual misconduct over many decades, played by John Lithgow and Russell Crowe respectively. Thus, the scope and viability of a Weinstein film has been firmly established. Crowe even won a Golden Globe for his portrayal of Ailes.

So, step up, Hollywood. Let’s see a deep dive into this cauldron of contradiction. We’ve had enough Weinstein documentaries.