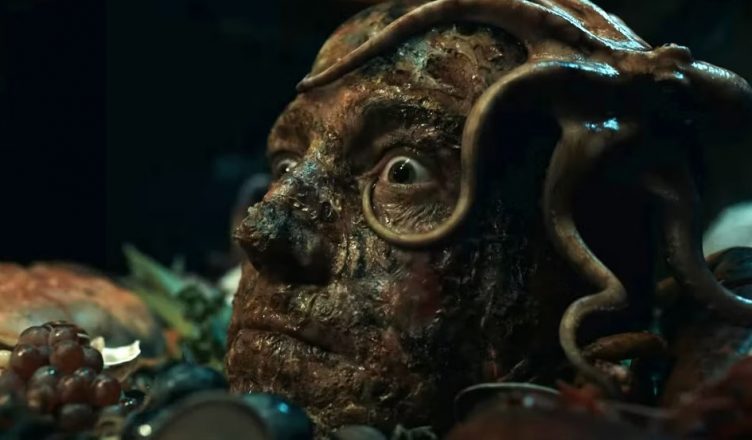 Fans of body horror that call for extended sequences involving graphic make-up effects shot in close-up might find some satisfaction, especially in the episode starring F Murray Abraham that largely consists of a detailed autopsy.

Made with a ostentatiously big budget, the series is big on squelching gross-out moments rather than engrossing supernatural stories. Much of the series is simply boring, though fans of Gothic set design and dim lighting will get their fill.

Most of the yarns are built around singularly uninteresting otherworldly concepts and feature the mandatory, often unnecessary, appearance of various ghouls, ghosts, monsters and spirits. It’s almost as if their screen time is mandated by their union.

The show doesn’t even appear to know what to do with a good idea when it has one.

The most grievous example is episode four in which an ugly duckling called Stacey (Kate Micucci) tries making herself attractive by using a cream she buys from a late-night TV infomercial. Things start off great – quite a relief after three dud episodes – but then degenerate into nonsensical piffle with the aid of an inevitable creature.

Probably the worst entry is episode two which involves a grave robber with a fear of rats and tight spaces. So where does he spend most of the episode? Deep down claustrophobic tunnels infested with rats. If only he had a pal to tell him: “Hey buddy, don’t go down there”.

The best advice is to go straight to the final instalment titled The Murmuring, which was directed by Australian Jennifer Kent (The Babadook; The Nightingale) and based on a story by Del Toro. Essie Davis plays a 1950s ornithologist who goes with her supportive husband (Andrew Lincoln) to a remote house in the picturesque Canadian wild to observe the extraordinary aerial patterns made by flocks of starlings to scare off predators.

She is suffering from bereavement, which stresses the relationship and causes her to hallucinate.

Davis puts in a terrific portrayal and unlike the rest of the series there’s no reliance on flashy digital effects or unsightly critters. It’s clearly the prime pick from a very mediocre bunch.

In terms of creativity, Cabinet of Curiosities is dwarfed by the rich legacy of anthology shows: The Twilight Zone; Night Gallery (both created by the great Rod Serling); The Outer Limits; Amazing Stories; Darkroom; and, of course, Alfred Hitchcock Presents.

A more telling comparison, though, is with outstanding contemporary shows such as Black Mirror, Love, Death & Robots and Tales From the loop. Rich with ideas, they brim with versatility, innovation, style and concepts that fascinate and intrigue.

Cabinet of Curiosities is presented and was created by Guillermo del Toro, a sporadically interesting gent who is now firmly established as one of the most overrated directors working today.

He’s also made some films that are either wince-worthy, boring or both. Take: Pacific Rim; Crimson Peak; the godawful Pan’s Labyrinth (regarded by many as a horror classic. Go figure); and 2017’s The Shape of Water, a strong contender for the silliest film ever to sweep the Academy Awards (best film, director, original score, production design).

Despite the lack of evidence, some champion del Toro as the 21st century version of Alfred Hitchcock. Alas, the only similarity between the two is their girth.
Netflix

BLOCKBUSTER ** (10 episodes; 252 minutes) M
whole series review
Mildly likeable, ultra-light and eminently forgettable, Blockbuster is a 10-part comedy series set in the last remaining movie rental shop. It’s run by Timmy Yoon (Randall Park) who strives with his team to keep the place afloat in the face of a disappearing DVD market and the onslaught of streaming giants.

A promising premise, to be sure, and the show does have a sprinkling of moderately funny gags about movies, the best of which is: “Yesterday I opened a La La Land case and there was just a loose piece of deli meat. Arguably an improvement”.

A few more dozen zingers like that would have helped a workplace comedy that spends far too much time with the employees and nowhere near enough dealing with customers, which is supposed to be the reason why Timmy is fighting to save the store, which is owned by his semi-friend and demanding landlord Percy (J.B. Smoove, so good in Curb Your Enthusiasm).

Give that the store is meant to be the last of an all-but-extinct breed, nothing is made to generate any comic tension about the pressures on the place, or explain why people in this particular corner of suburbia haven’t swarmed to all the far-more-convenient, far-less-costly, much-higher-quality alternatives.

The employees are only of passing interest: Eliza (Melissa Fumero) is a reluctant, recently separated, financially strapped team member who Timmy has feelings for; ); Hannah (Madeleine Arthur), the youngest employee and a renown cheapskate; Connie (Olga Merediz); , the oldest employee, eccentric and young-at-heart; and Carlos (Tyler Alvarez) who wants to emulate the path of Quentin Tarantino, though it;s odd the show didn’t use this as an excuse for a barrage of Tarantino movie quotes and arguments.

While the show is meant to be predicated on the alleged charm of video stores, nostalgia for these long-gone places also isn’t seized upon. That might be because, when you boil it down, there isn’t much.

There are a few riffs on cheesy signage and snacks, but do people really miss these places? Blockbuster doesn’t make much of a case. The decor might be full of memory triggers, but that’s not the same as nostalgia.

Perhaps if the store specialized in hard-to-find films, or had some unique, possibly illegal appeal.

As it is, Blockbuster clocks in as yet another example of the type of mildly entertaining streaming fluff you have on while doing the ironing or constructing a Lego set.
Netflix

Generating an increasingly tense, immersive atmosphere, Wright gets some intense performances from his leads in a skilfully minimalist film that won’t be to everybody’s taste it has still managed to be magnetic enough to rank it as one of the biggest global hits yet on the platform.

Footnote: The film had a brief run in cinemas before hitting the stream. This is an increasingly prevalent release pattern that requires a rethink about when such films should be reviewed.

In cases such as these it seems better to recommend a film as it hits the stream, where people can watch it as many times as they like and for little cost as part of their subscription. That has a clear edge over touting a film people can only see once with a ticket price that twice the cost of a month-long streaming subscription. Why not just wait?

Also, the sedate, brooding style of The Stranger lends itself to the home theatre environment.

As great as the cinema experience is, it need be said that an arguably richer experience is to be had watching the film in your lounge, on a big screen, without interruptions or distractions – a special place in Hell awaits those who use phones in cinemas – and with headphones, which really helps you appreciate the evocative sound design of The Stranger.
Netflix

CAUSEWAY ***1/2 (94 minutes) M
There’s a lot of justified Oscar buzz about Jennifer Lawrence’s subtle performance in Causeway as Lynsey, an injured vet back from the war in Afghanistan, keen to recover from her physical and mental wounds so she can get back to the battleground.

Living in her suburban home with her flake of a mum, she gets a job cleaning pools while waiting for her doctor (Stephen McKinley Henderson) to give her the all-clear, something he won’t do until he’s satisfied, she’s ready.

Lynsey strikes up an unlikely friendship with James (Brian Tyree Henry), a stout mechanic with a tender heart who has his own issues to deal with.

It’s an awkward bond that comes with many caveats, yet they try to make it work in a touching, modestly mounted, delicate drama about two lost souls searching for a meaningful connection, however temporary it might turn out to be.
AppleTV+

THE GOOD NURSE ***1/2 (121 minutes) M
With excellent, understated performances from Eddie Redmayne and Jessica Chastain, the ironically titled The Good Nurse is an unnerving, low-key, factual chiller about Charles Cullen, a male nurse whose pleasant, caring facade disguised a macabre obsession with killing his patients. Though he struck colleagues as odd, Cullen managed to maintain his quiet killing spree for decades without detection.

Redmayne presents Cullen as a seemingly nice, caring guy with a deceptively sweet, manipulative manner, a soft-spoken psycho with a smile. Chastain’s portrayal of fellow nurse and friend Amy Loughren is a finely-nuanced study of gradual confusion as the police fill her in with the full story as they try to enlist her help to get him to admit what he has been doing. Haunting stuff.
Netflix