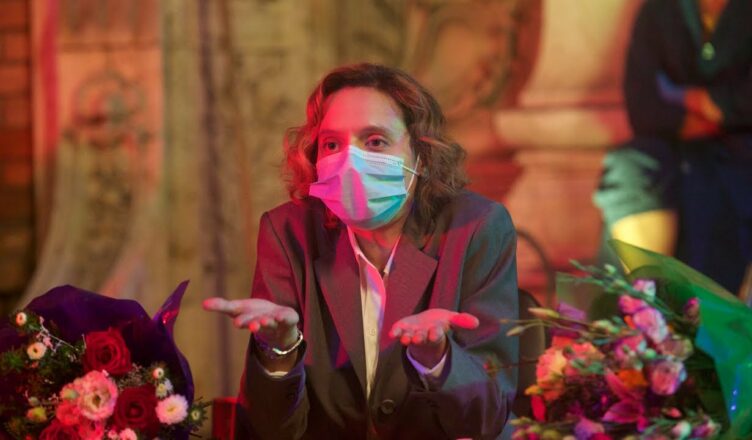 In one scene a woman whose mask has slid down her nose a bit is admonished with the sharp command “Mask!”. She then adjusts it in accordance with public health advice so that it properly covers the bridge of the nose.

In another scene where people attend a meeting the film is careful to emphasize how all the seats are at least 1.5 metres apart, thus emphasizing the importance of social distancing.

In the age of Covid, the film deserves special kudos for using the medium of cinema to reinforce the primacy of these safety measures that are designed to minimize the risk of the infection spreading from person to person.

When high school teacher Emi (Katia Pascariu) makes a sex video with her husband she soon discovers it has hit the internet, bringing her the type of fame she doesn’t need.

The film is divided in three parts. The first shows Emi dealing with the crisis; the third sees her at a meeting of parents and school officials where they discuss the scandal to decide whether she should stay or go.

How matters work out for Emi becomes a form-bending exercise for Radu Jude who engages in some narrative playfulness as we see various outcomes played out, with considerable comic effect.

Then there’s a middle bit comprising a cascade of images and captions that are a bit confounding, not least because the captions disappear so quickly you often don’t have time to read them.

There are a couple of laughs, but the whole segment seems jarring and largely unrelated to the braoder narrative. Perhaps the DVD and streaming version will give people the option to skip over this section.

As far as grabbing an audience’s attention from the get go, it doesn’t waste any time.

Though it’s certainly startling, how shocking it actually is will depend on your exposure to such material.

One recalls with misty-eyed nostalgia sitting in a packed cinema watching Baise-moi, which was playing to sold-out sessions at the Lumiere cinema (now gone) before it was banned from public view because it was so dangerous.

The film is now easily available on DVD.